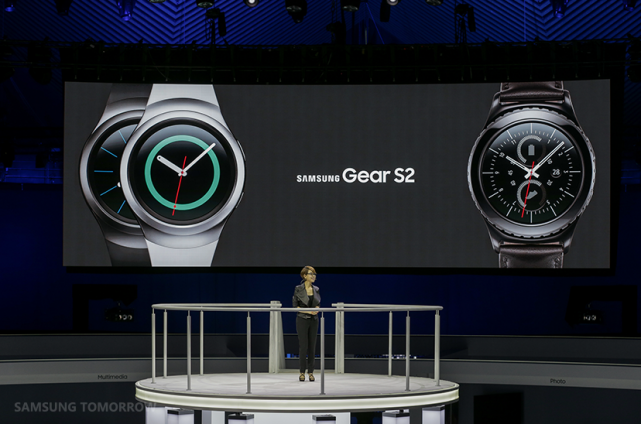 Last month at the Unpacked event in New York, Samsung teased a new device, and since then, there has been a great deal of speculation surrounding the newest addition to the Samsung Gear line-up. Finally, with the kick off of IFA 2015, Samsung has officially unveiled the much anticipated Gear S2, and did so with a grand celebration, at that.

Hundreds of guests packed into the Tempodrom, one of Berlin’s most iconic event venues, on September 3, for experience the new device for the first hands.  Although it wasn’t the first time Samsung  held an event at the Tempodrom—it has done so for product unveilings in the past—never before has it been more appropriate.

In fact the venue was the perfect place to unveil Samsung’s smartwatch, as it resembles the same shape as the one that inspired the Gear S2.

“The circle is intuitive,” YH Lee, EVP and Head of Marketing, IT & Mobile Communication business, said in the opening speech of the event. “And, as your body just knows instinctively, a circle is functional. With every turn, your life gets better.”

The audience, seated in rows that surrounded the circular stage, looked on as a video introduced the Gear S2 in all its glory. Afterwards, Lee explained the two versions of the smartwatch: The Gear S2 for sporty, active types, and the Gear S2 Classic for those that prefer a more timeless look. Despite their differences, both are minimal, gender-neutral and modern.

Pranav Mistry, VP, Head of Think Tank Team, was then introduced to show off the innovative design of the Gear S2, which is unlike any other on the market. Boasting a singular home key and a rotating bezel, the Gear S2 is easy to navigate, Mistry explained, which keeps its Super AMOLED display from being blocked from view. As a result, users can more easily read long emails, check the score of the big game or navigate within apps.

“That’s been a challenge for other smartwatch-makers,” Mistry explained. “Once you see how simple it is to turn and swipe your way around the Gear S2, you’ll see how easy it is. And you’ll wonder how you lived without it.”

In addition to its improved usability, the stainless steel Gear S2 boasts customizable watch faces and interchangeable wristbands designed by collaborators such as Italian designer Alessandro Mendini, so users can better express their own personal styles. Similarly, standalone 3G connectivity, an industry-first embedded SIM for a wearable and a power-saving mode let users be free and remain in the present moment. After all, who has “time” for anything else?

Alanna Cotton, VP of Product Strategy, Samsung Electronics America spoke to guests next about the incredible usability features of the smartwatch. From fitness functions such as a circular 24-hour timeline that displays a user’s activity levels to motivational notifications to “get moving” when it senses longer periods of inactivity, Cotton called the Gear S2 an “indispensable partner.”

Furthermore, the Gear S2 makes it easier to get around, providing navigational features or acting as a transportation card. Cotton explained that users can also use it to buy a round of drinks for their colleagues after a long day of work through Samsung Pay, or turn on the lights and set the temperature on their way home via SmartThings. And considering the device is worn on the wrist, it is always accessible, which Cotton stated will be the reason it will become the tool of first response.

“When you want to handle more complicated matters, you’ll go to your phone,” she said in her speech. “It reminds me of how we check our phones first, and then handle real work on a computer. Think of the Gear S2 as the next evolution in your mobile life. And it keeps getting better with every turn.”

To wrap up the presentations, YH Lee announced that the Gear S2 will be available in stores in October, giving the audience a glimpse a new product before encouraging guests to check out the experience zone, which was instantly illuminated at the end of her presentation.

Guests then gathered, trying out Samsung’s hottest products including the Galaxy S6 edge+, the Galaxy Note 5 and, of course, the Gear S2. 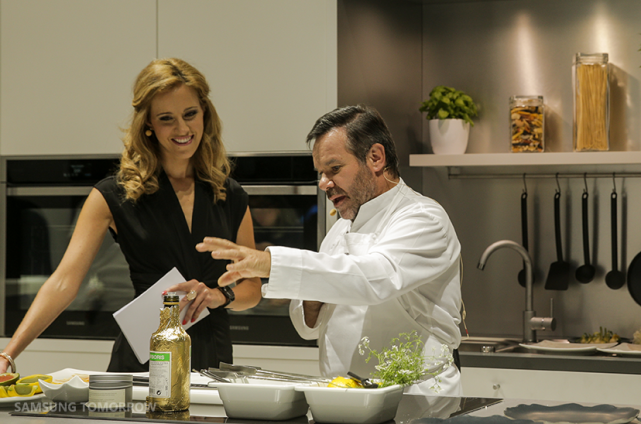 While the audience appeared to be impressed with each demonstration of the experience zone, one of the most memorable moments of the evening was when a group of culinary masters from the Club des Chefs, led a cooking show while utilizing the Samsung Chef Collection kitchen appliances.

But guests were treated to much more than tasty treats. They enjoyed capturing great food shots, with a little help from the exceptional cameras and features of the Galaxy S6 edge+ and the Galaxy Note5.