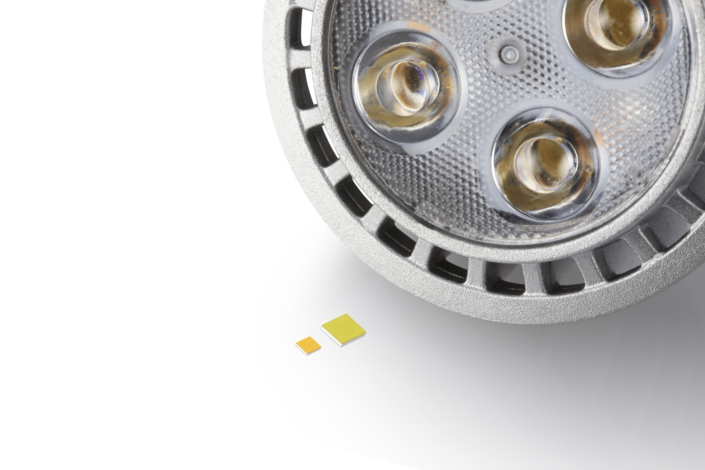 The LM101B and the LH231B packages are based on Samsung’s state-of-the-art, fillet-enhanced CSP (FEC) technology, which forms TiO2 walls around the chip surface to reflect its light output toward the top, acting as a plastic mold in conventional EMC-based LEDs.

With their FEC design, the packages provide a higher light efficacy level compared to Samsung’s previous generation of CSP LEDs*. The more focused beam also helps to eliminate cross-talk between neighboring packages and enables the new packages to be placed in close proximity to one another, offering greater flexibility to luminaire designers.

“Our FEC line-up represents an outstanding set of highly advanced LED component solutions that accommodates a variety of luminaire designs from below 1,000lm to well over 10,000lm,” said Jacob Tarn, executive vice president of LED Business Team at Samsung Electronics. “Samsung will continue to pave the way for widespread adoption of CSP technology in the mainstream lighting market, bringing greater performance and cost benefits to a growing number of lighting manufacturers.”

With an operating current of 2A (max. 6W), the LH231B offers an efficacy of 170lm/W (Ra70 5000K, 700mA, 85˚C). This is the same high efficacy level offered by ceramic-based high-power LEDs, one that can bring a high degree of cost-effectiveness when applied to high-bay applications that require an output between 5,000 and 10,000lm. Thanks to Samsung’s FEC structure, the 120-degree beam angle allows for simple optic designs, making it also suitable for outdoor applications, such as street and parking lot lighting.

The LM101B and LH231B complement the currently available 3W-class high-power LH181B CSP LED, and the entire FEC lineup is now in mass production.

*Editorial Note: Previous-generation CSP LEDs create a wider beam angle by emitting light through the top and side surfaces of a package that has been coated in phosphor film.