Samsung Electronics will hold the Samsung Smart App Challenge 2013 for GALAXY Note, a global contest to develop applications for the GALAXY Note 3 and GALAXY Note 10.1 (2014 Edition). 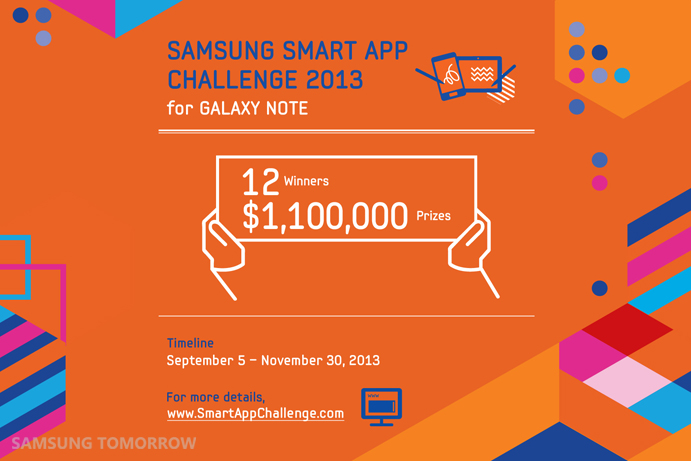 This is the second such competition hosted by Samsung this year following the one in the first half and it is divided into two categories ‘Smart Note Apps’ and ‘Smart Tablet Apps.’ Contestants are required to use the  ‘Pen’ or ‘Look’ package in the Samsung Mobile SDK when developing their applications and a total of $1.1 million in prize money will be awarded to 12 winning entries.

In addition to the cash prize, the final winners will be evaluated by Samsung Venture Investment as investment candidates. If selected, successful candidates will have an opportunity to promote their apps using a variety of global channels run by Samsung such as developer conferences along with international events like MWC 2014.

Developers wanting to enter the competition should go to www.smartappchallenge.com or developer.samsung.com/ssac2013/ for registration from September 5 to November 30. Apart from the Smart App Challenge, Samsung will also provide on- and off-line support to developers.