Samsung Electronics presents its Samsung GALAXY Team Russia for Sochi 2014, which includes top athletes in various winter sports and promising Russian sportsmen who will be competing in the upcoming Olympic Winter Games 2014 in Sochi. 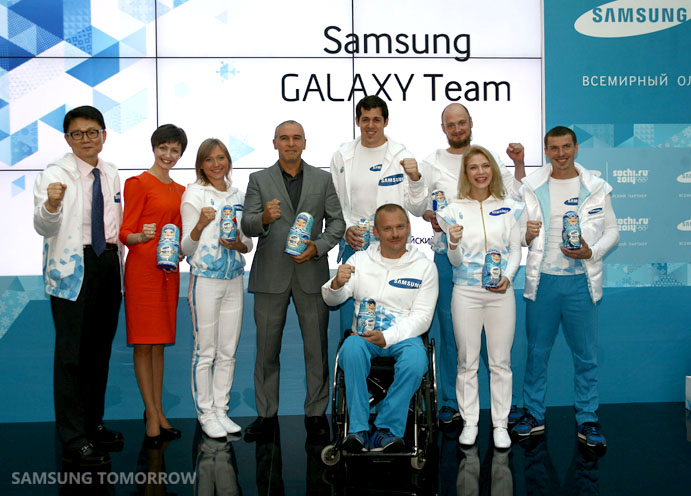 Samsung is working closely with the Sochi 2014 Organizing Committee to make Sochi 2014 Olympic Winter Games the most innovative and accessible Games to the widest possible audience. The Samsung GALAXY Team is one of Samsung’s key initiatives around the Olympic Games, aimed at promoting the Olympic Movement and providing “direct contact” between Olympians and their supporters around the world. Today’s event marks the first official kick-off of one of Samsung’s key activations for Sochi 2014. Beginning with Russia, Samsung is selecting top athletes in 16 countries to join in Samsung GALAXY Team and spread the Olympic spirit throughout the world.

The project is a legacy program with international experience: during the London 2012 Olympic Games, 11 top British athletes and 10 Italian athletes were a part of Team Samsung, in addition to the Samsung Global Ambassador and legendary footballer David Beckham. The head of Samsung GALAXY Team Russia for Sochi 2014 will be Evgeni Malkin, the Russian ice hockey star, winner and best player of the 2012 World Ice Hockey Championship. 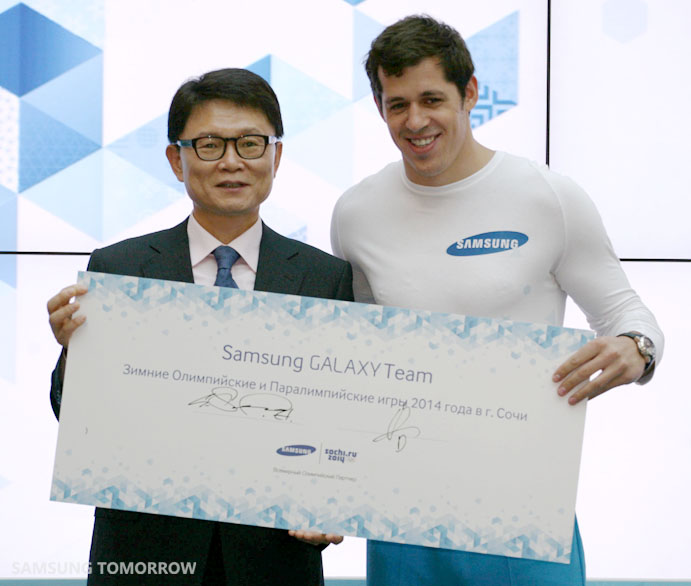 Maria Sharapova, winner of 29 WTA singles titles, four Grand Slam singles titles and a silver medalist at the London 2012 Olympic Games, was also named Samsung’s brand ambassador for the Sochi 2014 Olympic Winter Games. In this role, Sharapova will work with Samsung to promote sporting and Olympic ideals as well as helping raise awareness for Samsung’s Sochi 2014 sponsorship through a variety of initiatives.

Samsung and all the members of Samsung GALAXY Team will aim to promote Russian sport and Sochi 2014 Winter Games as a key event in the international sports calendar.

In addition to Samsung GALAXY Team, the company is running a whole range of other projects in support of Sochi 2014 Olympic Winter Games.

The multimedia Samsung Olympic Games Digital Hub project will enable anyone who is interested to find out in detail about the athletes participating in Samsung GALAXY Team and to learn more about the history of Samsung’s involvement in the Olympic Movement.

Samsung Electronics will present an interactive platform called WOW (Wireless Olympics Works) to give the Olympic Family including organizers, staff and officials access to up-to-date information on the Games via mobile devices, while the Public WOW service will enable the media and fans around the world to get the latest news from the Olympics via their smartphones, including schedule changes and competition results.

Samsung will also present its Samsung Matryoshka – a good luck symbol for the Samsung GALAXY Team that has been specially produced for the Sochi 2014 Olympic Winter Games. Each member of Samsung GALAXY Team Russia will receive a specially customized matryoshka doll representing the winter sport discipline in which he or she competes.