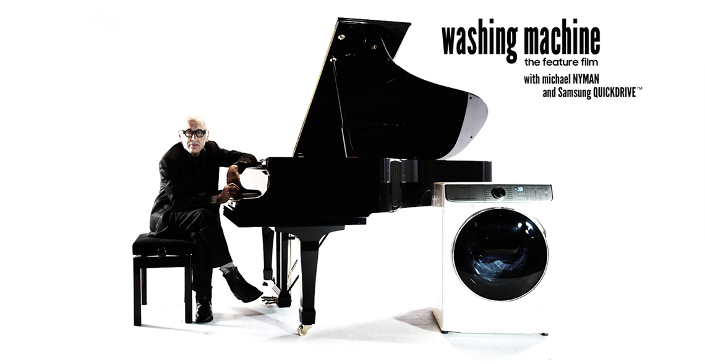 One of Britain’s most innovative and celebrated composers has created a unique original score to accompany a 66-minute family wash cycle.

Michael Nyman whose haunting work has accompanied dozens of hits and arthouse movies, including Oscar-winner The Piano has composed the soundtrack to accompany a new feature film which turns the everyday drudge of the washing machine cycle into art.

In an audacious move, the poetic monotony of the spinning drum and sloshing water are the sole focus of ‘Washing Machine’ – a movie which will receive its world premiere at Leicester Square in London’s West End in early December.

The film chronicles the full cycle, moment by moment, of Samsung’s QuickDrive™ washing machine, in this big screen addition to the canon of slow cinema treats. The production team captured the action with a single long shot trained on the machine to bring the full glory of the wash, rinse and spin to the screen.  Samsung believes that cinema audiences, who have in recent years become accustomed to unusual experiences such as live relays of theatre, rock concerts and opera, or simulcasts of TV premieres, will be able to break new ground with the release.

Ivor Novello-winner Nyman, who recorded part of his soundtrack live in London surrounded by monitors featuring the wash cycle, commented: “By coincidence, this new work comes exactly 300 years after the 1717 premiere of another celebrated composition inspired by the flow of water – German-British composer George Frideric Handel’s Water Music so in some ways we have come full circle with ‘Washing Machine – The Movie’.”

The movie builds upon the ground-breaking 3 min 20 sec advert featuring a QuickDrive™ wash cycle which was broadcast during a single-shot complete ad break takeover on Gogglebox on C4 on the 24th of November. It follows research commissioned by Samsung showing that huge numbers of people are already fascinated by the mesmeric power of watching the wash spinning, with hundreds of thousands of hours clocked up on YouTube.  Indeed, footage of full-length washing machine cycles has achieved more than THREE MILLION views.

The piano-led 66 minute soundtrack features one of Nyman’s signature minimalist compositions, driven by an explorative melody which takes the audience on a passage through the various stages of the wash cycle. The repetitive motion of the spinning drum is melodically represented through Nyman’s masterful playing, with thematic ideas developing as the wash progresses.

Nyman said: “The idea of this intrigued me when I was approached, putting a score to something so visually repetitive and prosaic. As a film composer you are frequently taking a cue from the drama on screen or interpreting it sonically, but here the challenge was to offset the mundanity and also enhance the hypnotic appeal. 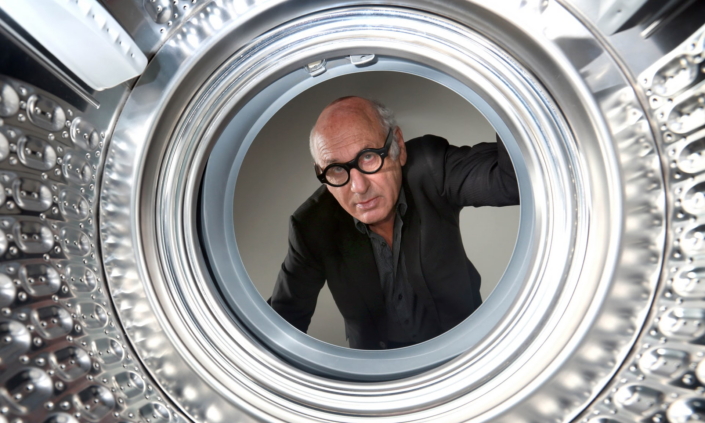 “I have written a lot of music to manufacturing processes, but this is the most elaborate mechanical, mechanistic film I’ve been involved with. I’m interested in the mechanical process, the way that I create musical cycles which are based on repetition and variation and the correlation between that music and what happens in a washing machine process. I really want the music to be heard and I want the music to be loud, so I think with this project its man over machine.”

Samsung’s research which inspired the film revealed that on average, British adults will spend an average of 1,481 hours watching the washing go round and round – which adds up to the equivalent of 61 days across a lifetime.  For those who love to get lost in the hypnotic thrill of the washing machine but don’t want to waste too much of their lives, the Samsung QuickDrive™ is perfect because it cuts laundry time in half2, without compromising wash performance.

Mark Seaman, Head of Domestic Appliances, Samsung UK & Ireland, said: “Our film features a virtuoso performance from both man and machine. The Samsung QuickDrive™ gives a washing performance unlike any other so it was only fitting to turn it into an artwork in its own right. What better way to showcase the fastest washing machine we have ever made than to feature it in one of the slowest movies ever created, complete with a soundtrack from one of Britain’s most celebrated composers.” 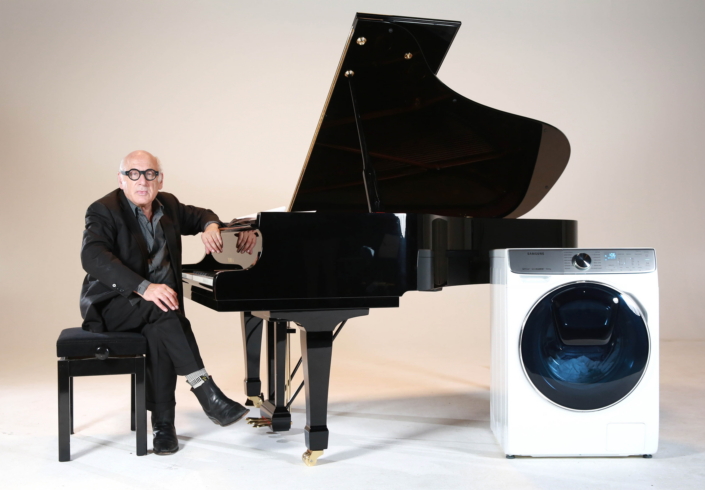 Washing Machine – The Movie will receive a world premiere at Leicester Square’s Cineworld Theatre on the 5th December 2017.  The film will be available to watch free of charge via YouTube from the 6th December.