Samsung Smart Signage to Transform the Way We Shop

Samsung’s exhibition at IFA in Berlin has most certainly demonstrated how technology is transforming the world and the way we live in it. From connected cars to innovative wearables, it’s clear that Samsung is making its mark on a variety of industries, including retail. In fact, between gargantuan video walls and customized displays, there is no shortage of signage solutions to be explored, and there are plenty of in-the-know, on-the-scene experts more than willing to give IFA attendees a closer look at the very near future of shopping.

One of the more attention-grabbing displays of the bunch is the 55-inch transparent OLED (T-OLED), the first transparent display panel for commercial use on the market. Designed to add appeal to storefronts and showcases through improved aesthetics and unconventional advertising, the display allows for the streaming of content without blocking a customer’s view of what’s behind the screen. The touch-ready T-OLED, which also boasts built-in speakers, promises a highly differentiated customer experience before the consumer even sets foot into the shop. 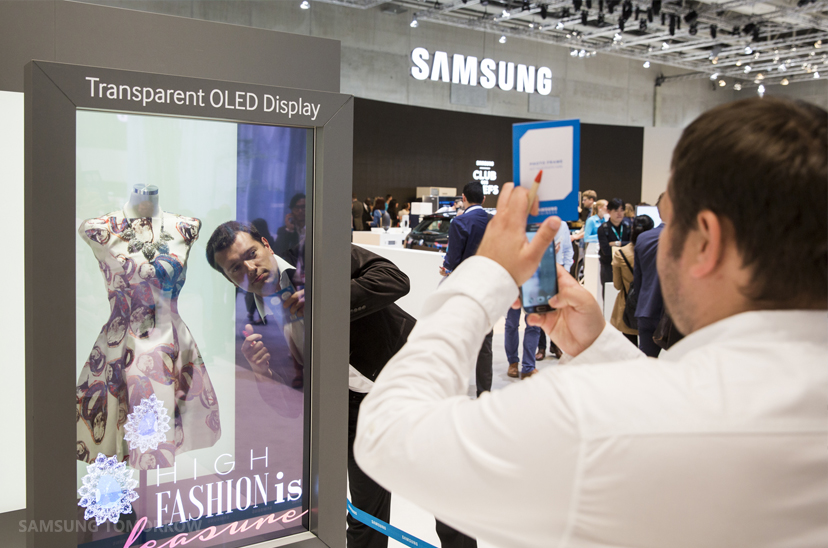 In a day and age when competing for consumers’ attention gets increasingly more competitive, the 65-inch signage (DM65E-BR), with a high resolution and All-in-one Touch capabilities, is intended to keep guests in the store and shopping.

At IFA, Samsung illustrates how the DM65E-BR might specifically be used in a clothing store. On one display designated as a digital shopping guide, attendees can browse the brand’s wares by flipping through an oversized lookbook to get an idea of which pieces look best together, or mix and match tops and bottoms to create an exquisitely personalized look.

Next to it, the same display model is mounted and acts as a virtual fitting solution, boasting even more interactive options. A computer-generated model donning one of the brand’s featured items can be rotated with a swipe of the finger to get a 360-degree view of the outfit. For a more accurate idea of what the clothing might look like on the shopper, the model’s hair style and clothing size are able to be altered with a simple tap. 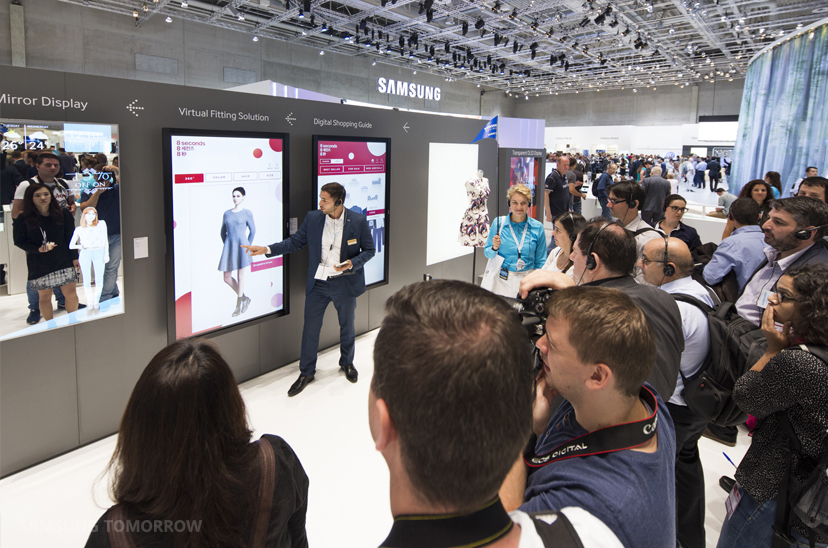 Once a customer selects items to try on, Samsung’s Wi-Fi enabled, 55-inch Mirror Display (which is also a highlight of the Samsung Smart Signage booth at IFA) greets consumers in the fitting room. Utilizing transparent and reflective OLED panels, the display adds a unique aesthetic to one of the most important, but often underestimated, areas of a store. Information about the store’s products as well as discount information can be displayed on the screen, creating a unique opportunity for the store to interact with the consumers in an unprecedented fashion 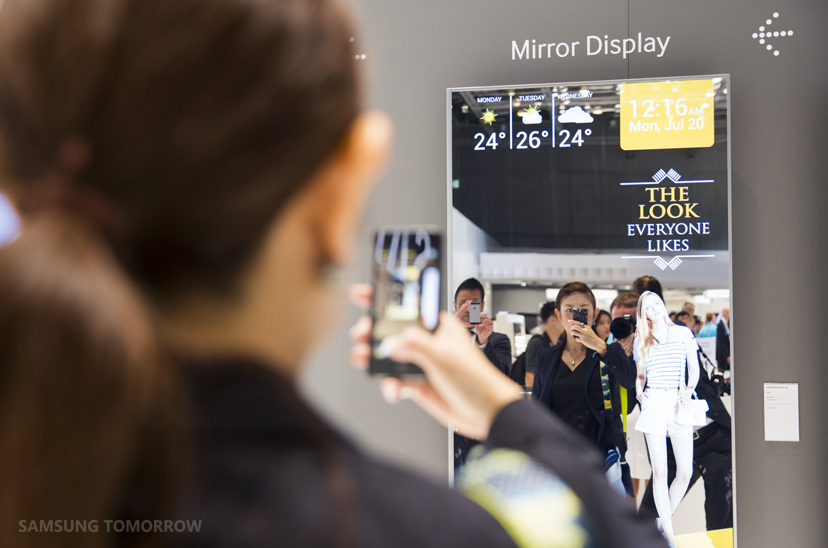 After finding one’s perfect outfit, the customer can utilize Samsung’s 10.1-inch Small Signage (DB10E-POE) to obtain coupons for the specific products he or she is purchasing, and can even pay directly from one’s smartphone via Samsung Pay. As such, the entire shopping process, from the beginning to end, is seamlessly connected with Samsung’s Smart Signage.

Such interactive, helpful tools will no doubt establish brand loyalty, and display models such as the 85-inch (QM85D-BR) and 48-inch (DM48E) signage will help a brand reward customers when they return to the store, while increasing sales at the same time. At IFA, Samsung is demonstrating that businesses can utilize these displays to create a system that keeps track of a customer’s purchase history, shopping preferences and even wish lists through their smartphone.

Once the customer taps their mobile device to the screen, the QM85D-BR recognizes the shopper and as he or she navigates the store, connected displays such as the DM48E will present advertisements that include QR codes for discounts based on the shopper’s preferences.

The possibilities are endless with Samsung’s latest Smart Signage displays and those at IFA illustrate only a few of them. Time will only tell what the rest of these possibilities may be, but one thing is for certain: Samsung is making the consumer purchasing experience more visually engaging and interactive, and as such, transforming the way we shop.