Samsung will be launching the ‘Samsung SSD 830 Series’ with double the data bandwidth than its previous product, the SSD 470(Google-Translation of Korean Blog).

SATA (Serial Advanced Technology Attachment) is a computer data interface for connecting and transferring data to hard disk drives and optical drives. Adapters and mass storage devices are designed to connect the parallel port due to its relatively high-speed. SATA 3.0 version features a 6.0Gbps data transfer rate, whereas SATA 2.0 used to transfer at 3.0Gbps.  This increased data transfer rate shortens the system boot-up time up to 10 seconds and allows for downloading of 5 DVD files in less than one minute.

SATA 3.0 shows 6.0Gbpsdata transfer rate shortens the system boot-up time up to 10 seconds and allows for downloading of 5 DVD files in less than one minute.

Samsung SSD 830 Series presents the industry’s highest Random Read Speeds of 80,000 IOPS, allowing users to experience the fastest performance. This new series is ideal for everyday use such as web-surfing, enjoying multimedia, editing document files, playing games, etc.  Its ability to multi-task saves you time and allows you to get the most out of your computer.

Double the speed of SSD 470

This new Samsung SSD 830 Series has a 20 nm NAND Flash memory chip embedded in it.  This chip incorporates the Toggle DDR and MCX controller, which realizes Sequential Read Speed of 520MB/s in all lineups. This drive doubles the data delivery speed in comparison with Samsung SSD 470 (up to 250 MB/sec). In addition, Random Read Speed can boost up to 2.5 times faster than SSD 470 Series (up to 31,000 IOPS). It reduces the CPU’s booting up time while maximizing multi-tasking performance ability.

Samsung SSDs are designed and built completely in-house. The Samsung SSD 830 Series is optimized for exceptional, sustained performance and unrivaled reliability through its specially-engineered wear-leveling and garbage collection algorithms. 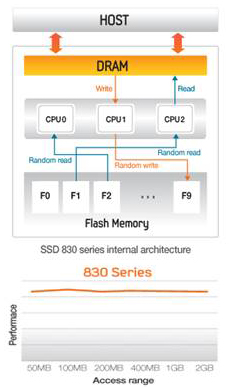 Compared to conventional SSD Dual Core controllers, this new controller presents improved multi-tasking functions. Based on ARM 9 processor, three separate CPU cores have the ability to work concurrently under the MCX controller; for example: one core could be used for reading data, another one for writing operations and the third one for optimizing the system.

Though you most likely won’t see the SSD830 once you install it in your computer, it’s still exceptionally beautiful with the black-tone brushed metal enclosure measuring only 7mm thick. The orange block nestled in the corner displays the drive’s capacity.

The Samsung SSD 830 series is available with a user-friendly installation kit for beginners, including a full version of Norton Ghost, an interactive installation guide, and premium installation tools for both desktops and laptops. Moreover Samsung’s Magician Software makes it easy for users to maintain their SSD at its peak condition, giving you consistently great performance and reliability throughout the life of your own PC.