Samsung Apps, the world’s first HDTV-based app store, has continued to grow both in size and popularity at an impressive rate. Samsung Apps TV recently celebrated the milestone of 1,000 registered applications and soared past the 10 million mark for number of downloads. Both achievements show Samsung’s initiative to build a Smart TV ecosystem worldwide.

Online video applications remained at the top of the lists of most downloaded apps both globally and regionally. YouTube™ stayed atop globally, and was the country leader in the United States and South Korea.

The latest achievements come after Samsung Electronics became the first in the world to introduce a TV app store in February 2010. Downloads from Samsung Apps TV have grown 100 percent just five months after reaching 5 million downloads in May 2011. In fact, as of today, the store has reached more than 11 million downloads in total, with an average of 50,000 downloads per day—double the number of downloads that occurred in May 2011.

Such rapid growth underscores the increasing number of active users of Smart TVs, as well as Samsung’s continued efforts to build an ecosystem by delivering a wide variety of high-quality TV content and services through strategic collaboration with major content providers.

As a result, consumers enjoy a wide range of applications across diverse areas of interest like news, entertainment, sports and games. For example, on-demand news applications “BBC News” and “WSJ Live” offer the top live news of the day in video and text, updated 24 hours a day. Other news applications such as “CNBC Real-time app” and “TIME TV” also provide an array of insight, analysis, breaking news, photography and video.

Entertainment applications like the “Berliner Philharmoniker” provides more than 100 live classical music concerts from one of the leading orchestras in the world, the Berlin Philharmonic. There are also great selections of sports applications such as “ESPN ScoreCenter” and “MLB TV”  that have gained popularity from users by providing live score updates, video highlights, and team and player statistics.

Particularly, locally specialized applications have also played a big role in the success of Smart TV app store. Apps such as “Lovefilm” in the UK, “Berliner Philharmoniker” in Germany, and “Telstra’s NRL Game Analyser”  in Australia have proven to be very popular.

In addition to such strategic collaboration, Samsung Electronics continues to hold developer application contests across the globe to create partnerships with and educate the developer community. “Apps Contests” were held in the United States, United Kingdom, France, Germany, and Korea in 2010, and has expanded to countries such as Brazil, Mexico, China, and Southeast Asia this year. Furthermore, Samsung also continues to actively support developers with the distribution of its Samsung Development Kit (SDK), which allows developers to create TV-optimized applications more easily. Through the Samsung Developer Forum (SDF), the company is encouraging information exchange among developers. 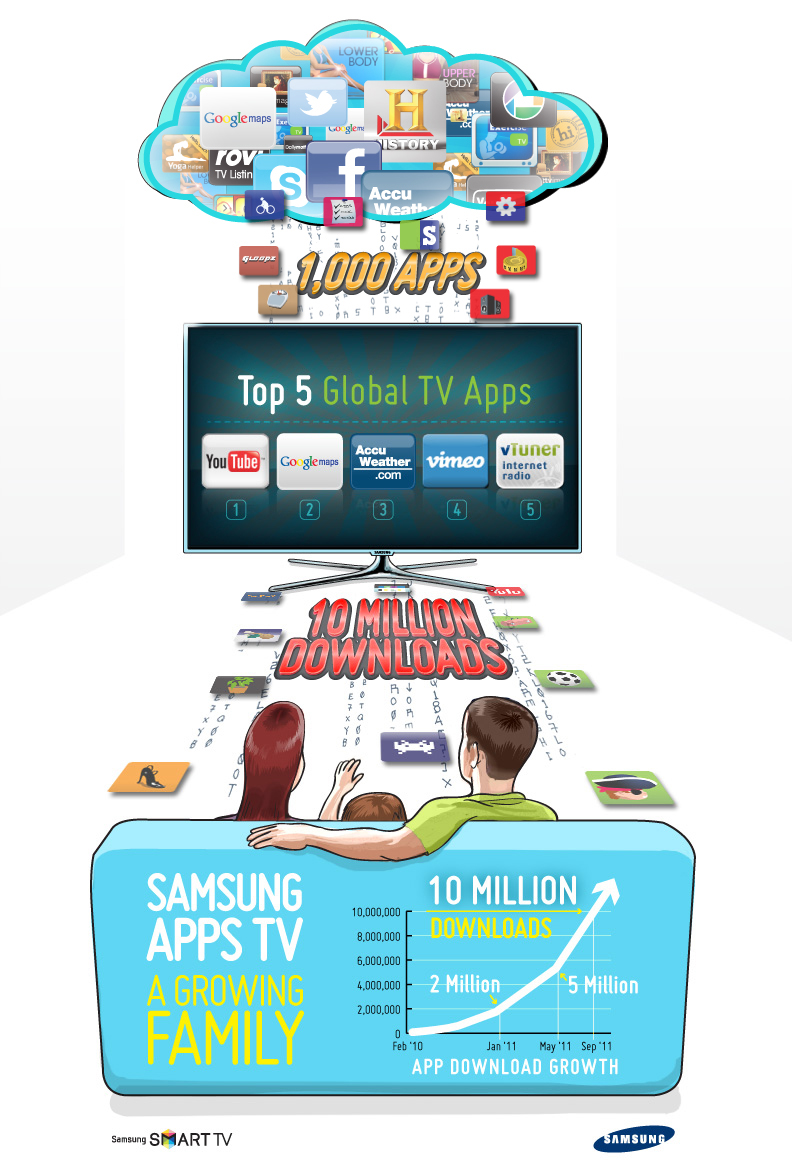