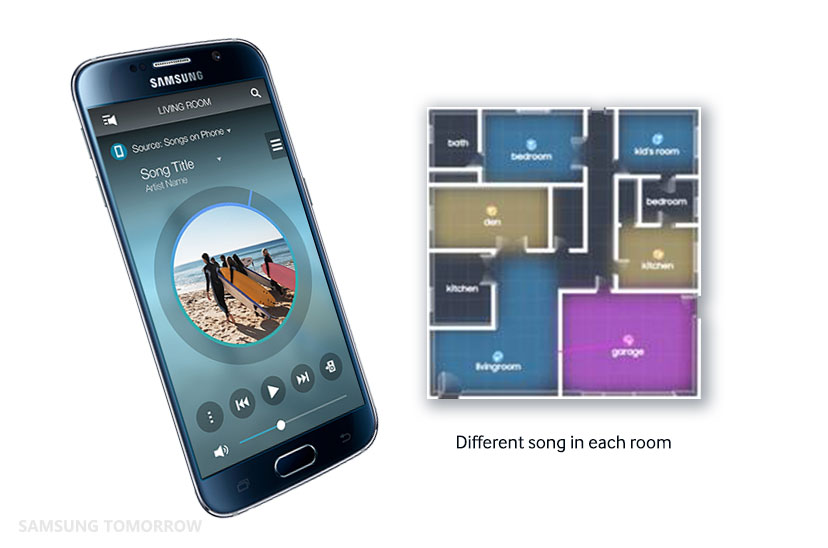 Samsung has launched its new Multiroom App, which makes it possible to share music across Wi-Fi-connected devices throughout the home, with a user interface that is designed to simplify the listening experience.

The new and upgraded version of the Multiroom App, available on Android and iOS, makes it possible to control speakers, access music sources and playlists on other devices, and browse music libraries all in one place. The app gives users full control of their music experience directly from the home screen.

The new Multiroom App boasts an improved user interface with a new central wheel dial for more intuitive navigation. Custom queue lists can now be browsed easily with just the touch of a finger. The app upgrade gives users direct access to their favorite music. Launching the app turns the home screen of the device instantly into a music player with quick access to all tracks and main menus of the application

But the real beauty of the app is in its ability to control Wi-Fi-connected speakers throughout the home. Users can seamlessly switch the playback from their headphones to the Samsung Audio in their home. The app even allows users to play different songs on different speakers at the same time. So users can choose one playlist that fits the mood for the dining room, and another for the outdoor patio, all while streaming a podcast in the bedroom. Once the device is connected to Wi-Fi, the app can quickly search the local network to add any Samsung wireless speakers.

The improved new Multiroom App also has a Universal Search function, which makes it possible to access songs on other devices connected to the local Wi-Fi network – including mobile devices, computers and streaming services. (To play songs from a connected PC, users will need to download separate software from Samsung.com).

Enhancing the music experience, the new Multiroom App automatically changes its color scheme to mirror the album art of the song that is being played – a little twist that gives music fans a great multi-sensory entertainment experience.

The new Multiroom App also tackles another bugbear of music fans. On too many devices, editing playlist queues can be tricky. With the app’s improved queuing function, consumers can now easily add, delete and change the order of music with just the touch of a button on the home screen. Users now also have instant access to their music thanks to a widget that launches the app’s music player directly from the home screen.