Samsung’s Premium Phone for China looks something like this

Generally, the concept of ‘premium’ refers to a trendy product of superior quality. In China, it refers to something more. The Chinese base their concept of ‘Premium’ on the thousands of years of their unchanged ideology and respect for the arts; it reflects China’s distinctive cultural identity.

So, what does a premium phone for China look like?

‘W Series’ is Samsung’s flip smart phone series in China, which has been enjoyed by the market since 2006. Here is the story. 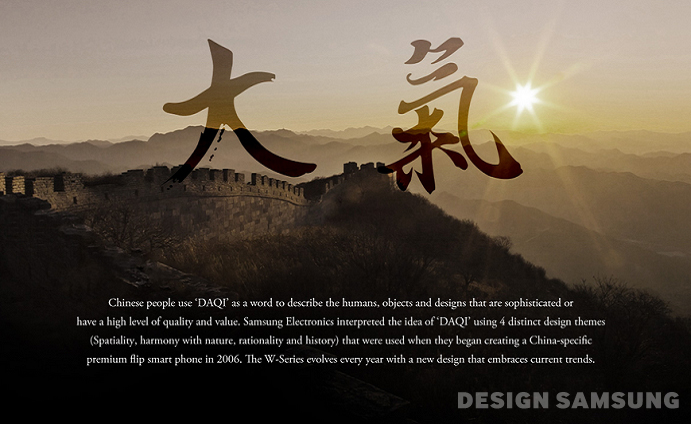 Chinese people use ‘DAQI’ as a word to describe the humans, objects and designs that are sophisticated or have a high level of quality and value. Samsung Electronics interpreted the idea of ‘DAQI’ using 4 distinct design themes (Spatiality, harmony with nature, rationality and history) that were used when they began creating a China-specific premium flip smart phone in 2006. The W-Series evolves every year with a new design that embraces current trends. 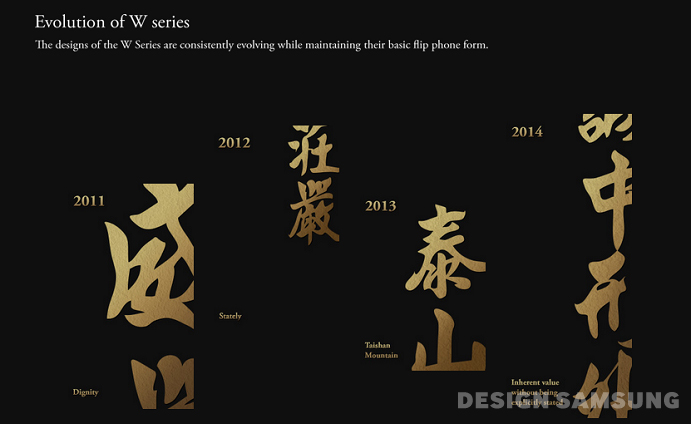 The designs of the W Series are consistently evolving while maintaining their basic flip phone form. 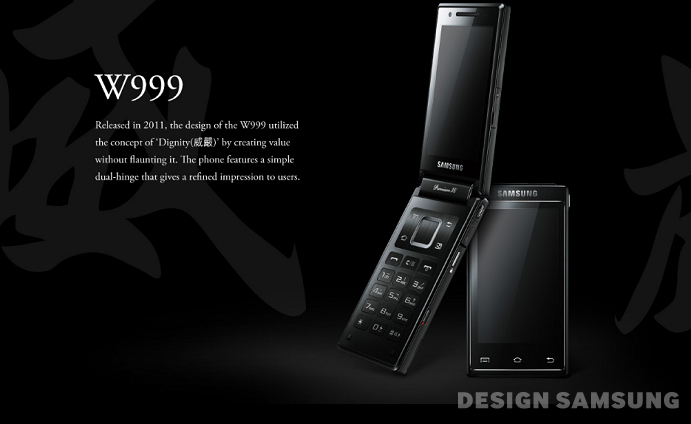 Released in 2011, the design of the W999 utilized the concept of ‘Dignity(威嚴)’ by creating value without flaunting it. The phone features a simple dual-hinge that gives a refined impression to users. 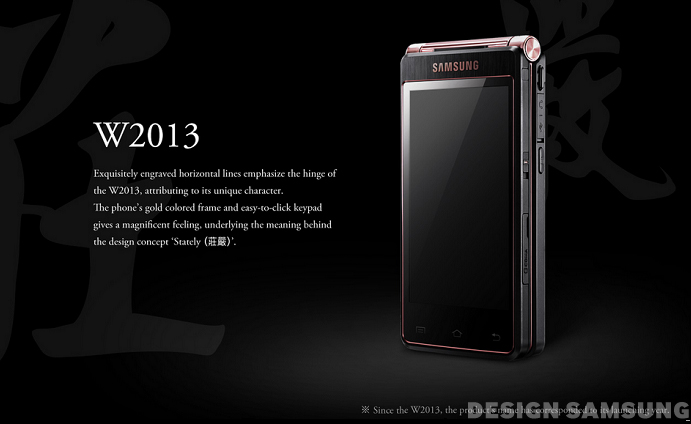 Exquisitely engraved horizontal lines emphasize the hinge of the W2013, attributing to its unique character. The phone’s gold colored frame and easy-to-click keypad gives a magnificent feeling, underlying the meaning behind the design concept ‘Stately (莊嚴)’.

※ Beginning with the release of the W2013, the product’s name changes each year. 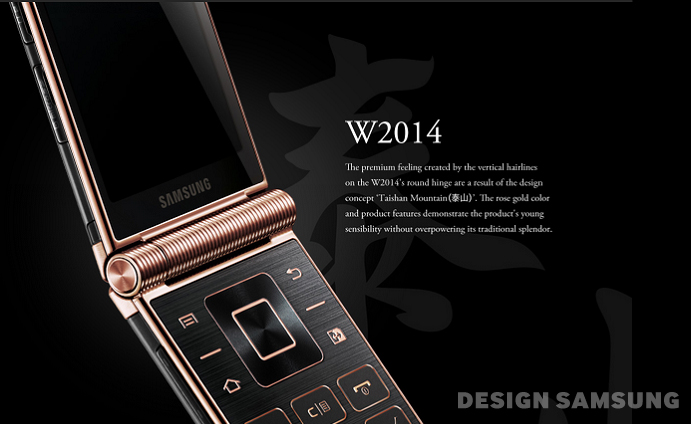 The premium feeling created by the vertical hairlines on the W2014’s round hinge are a result of the design concept ‘Taishan Mountain(泰山)’. The rose gold color and product features demonstrate the product’s young sensibility without overpowering its traditional splendor.

Inherent value without being explicitly stated

The W2015 design emphasizes ‘inherent value without being explicitly stated’, a concept derived from the book Da Xue(大學).When looking at products, the concept of ‘誠中形外’ means that a design reveals its value without having to rely on unnecessary embellishments and decorations. The W2015’s theme focuses on the ‘essence’ of Chinese tradition. The fine details and unique design of the Signature Edge reflect the spirit of oriental ideology while bringing elegance to the W2015.

The Design Characteristics of the latest W Series, W2015 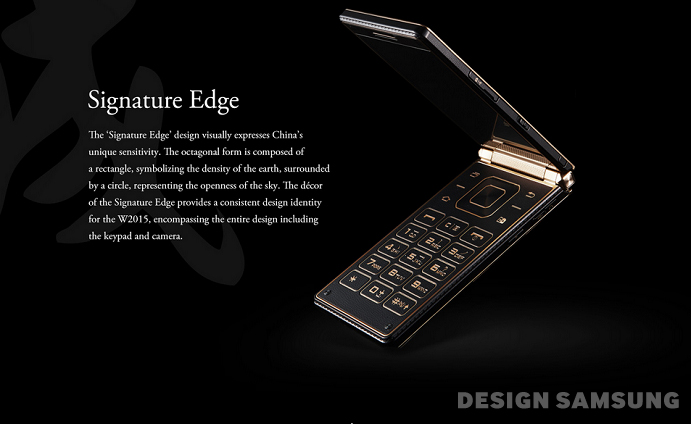 The ‘Signature Edge’ design visually expresses China’s unique sensitivity. The octagonal form is composed of a rectangle, symbolizing the density of the earth, surrounded by a circle, representing the openness of the sky. The décor of the Signature Edge provides a consistent design identity for the W2015, encompassing the entire design including the keypad and camera. 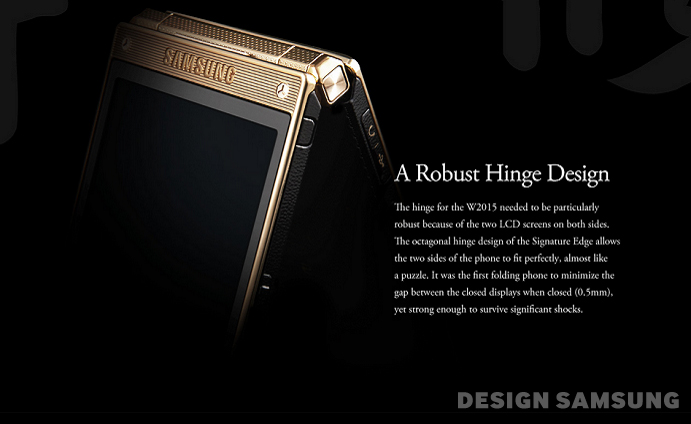 The hinge for the W2015 needed to be particularly robust because of the two LCD screens on both sides. The octagonal hinge design of the Signature Edge allows the two sides of the phone to fit perfectly, almost like a puzzle. It was the first folding phone to minimize the gap between the closed displays when closed (0.5mm), yet strong enough to survive significant shocks. 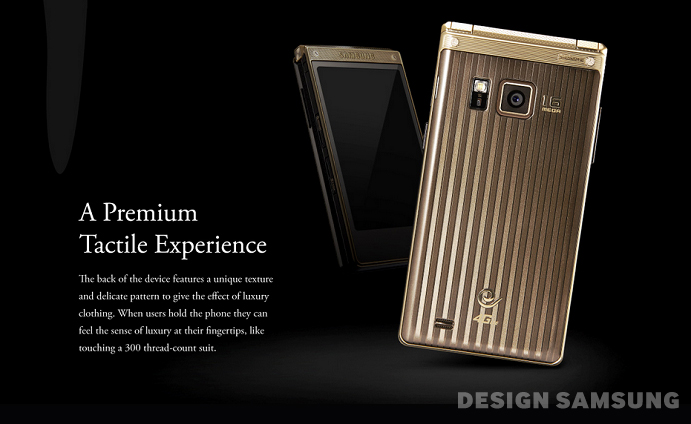 The back of the device features a unique texture and delicate pattern to give the effect of luxury clothing. When users hold the phone they can feel the sense of luxury at their fingertips, like touching a 300 thread-count suit.

That will be it for the design story of the W Series. What do you think? What do you consider as a premium phone? Leave us a comment to let us know. Thanks!

** This article is originally from design.samsung.com.