Seeing the Glimpse of Internet of things at the MWC 2014

* The following is an individual opinion of editor ASyk and does not represent the official views of the company.

According to the official website of the Mobile World Congress, this event is “the blueprint for the NEXT big innovation. Whatever is coming NEXT will likely be born at Mobile World Congress 2014” Therefore, it shouldn’t surprise anyone that Samsung announced its new flagship devices such as Galaxy S5, Gear 2, Gear 2 Neo and Gear Fit at the MWC 2014, although the devices themselves were certainly a surprise. At Hall 2 there was a booth which was showcasing what a little chip can do.  The connectivity chip got me imagining what the future might actually look like. The connectivity chip made it easier for me to accept that certain future concepts are not so intangible, such as the “internet of things.”

-The Internet of Things-

Wikipedia defines the Internet of Things as “uniquely identifiable objects and their virtual representations in an Internet-like structure.” IoT has been discussed for a long time, but for many of us IoT still remains a ‘concept’, because it just isn’t tangible enough… even though it is.

For example, at the CES 2014, we saw the demonstration of Samsung Smart Home on how device-to-device communication can make an experience more fun and efficient. The key to this is each object being ‘identifiable’ and having a ‘virtual representation’, so that they can communicate with each other. Therefore, each object needs access to the internet.

At MWC 2014, Samsung was showing how the Internet of Things can expand to a much larger scale, as the IoT was initially destined to do,  by  its connectivity product. 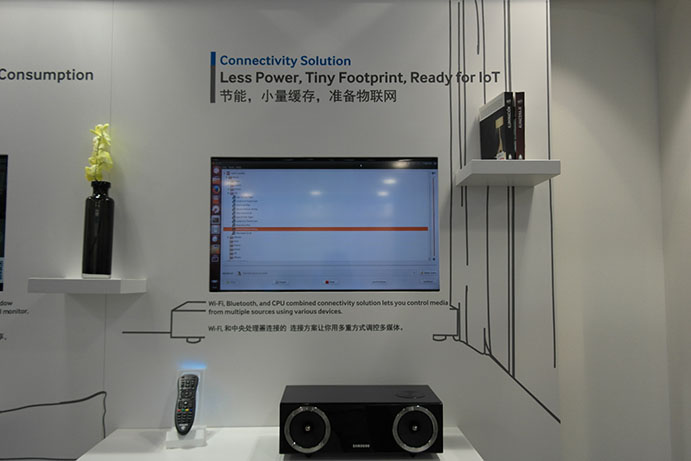 -The Thing that Things Need for IoT-

Generally, for things to have access to the internet, they need a Microcontroller (MCU) to process information and a WiFi connection to connect to the internet. So far, both of them come separately. However, the new connectivity product Samsung is showcasing at the MWC 2014 has combined the two so the MCU embeds the ability of WiFi. Out of many things, two things stand out.

First, because you don’t need the MCU and the WiFi separately, and if you are an OEM, it gives you more freedom  in terms of design. This allows for a shorter development lead-time and less engineering resources are required. The manufacturing process becomes more efficient meaning more time and energy to concentrate on the quality of the product.

Knowing this, we can paint some pictures for the future in regards to the internet of things. So let’s try imagine it:

– A car warming itself and defrosting the windows, 15 minutes before you get in the car to go to work after a night of heavy snow.

– A restaurant where the water cup recognizes how much water you have left to tell the waiters that you need more water.

– A conference meeting where you can have the information on who is sitting where on your mobile device, or via wearables, because each chair and the table recognizes the person at it.

– A house making an emergency call before something is about to catch on fire when you are not at home.

-The Inevitability of IoT-

Not coincidently, ‘IoT’ is happening seamlessly. It seems seamless because devices’ complex communication is all happening over the internet. With the new connectivity product, more things can have the ability transmit and receive information. Therefore, it is not so much a challenge for objects to have identification and virtual representations. The question of the future is how we are going to use it.

Looking back on it, ‘IoT seems like a very logical step, once ‘Connected’ happened. Let’s just think about the Samsung products and events up until the end of last year, such as Smart TV & Camera, Smart Refrigerator, Smart Microwave, Smartphones, Galaxy Gear and more; practically every Samsung product around you could be described as ‘Connected.’ However, they were ‘Smart’ individually. It really was just a matter of time before they start connecting to each other and with us.

What we are seeing at the Samsung booth at MWC 2014 is the glimpse of the future of IoT. For example, we are seeing a variety of Samsung SDKs that allow developers to make it easy for devices to be connected to other devices. We are seeing how the technology of wearables can influence our lifestyle to become healthier. However, the software needs to be backed up by the hardware and we can see this at the Samsung booth at MWC 2014. It definitely is only a step, but it is definitely a step closer to the future with IoT.