The evolution of PC monitors began with the CRT type, which had a convex middle (previously nicknamed “fat-belly monitors”), and continued on to flat monitors. Now, curved monitors are growing in popularity. Among the pioneering products in this space is Samsung Electronics’ 3000R curved monitor, which is designed to reduce eye fatigue while delivering a clear, bright presentation.

We conducted an interview with Dr. Kim Sung-joon from Seoul National University Hospital’s ophthalmology department to discuss how the use of curved monitors can help viewers improve eye health.

A: In the past, people used to read newspapers and books or watch TV while sitting on a sofa at a distance. However, they currently spend more time sitting in front of personal computers. They work for long periods with their eyes kept at a short distance from the screen. Such prolonged PC use and limited recovery time exposes people to factors that cause eye fatigue.

A: When working on a computer, human eye muscles contract and tense to focus on objects in close distances. This may cause pseudomyopia, which is a temporary manifestation of myopia among people with healthy eyes. Although pseudomyopia does not necessarily become a chronic myopia, it is an unnatural activity for the eyes and therefore adds more fatigue. People who view PC monitors for a long time may develop VDT (Visual Display Terminal) Syndrome, which can cause headaches, eye pain, glare and dry eyes. We’ve seen an increase in patients suffering from VDT Syndrome during the last few years.

A: My personal experience with curved monitors has been positive, and I encourage my patients to consider such technology as well. It was less straining on my eyes to look at the curved monitor compared with a flat-screen alternative, and I felt less long-term fatigue after extended use. There also is a psychological comfort in knowing that my eyes are softly surrounded. Generally, higher definition monitors often lead to more eye fatigue. However, curved monitors not only have better definition, but also have an optimal curvature so the eyes remain comfortable.

Most modern curved monitors come with features that help preserve eye health and enable uninterrupted long-term use. For instance, Samsung’s curved monitor contains an ‘Eye Saver Mode’ that limits exposure to blue light and visual inconsistencies that can increase eye fatigue. Blue light is one of the many wavelengths among visible light generated from monitors and affects the nerve circuits that control eye pain. Therefore, controlling blue light will reduce eye glare and the potential pain that occurs after using monitors for a long period. The impact of display screens on the eyes can also affect the system that controls the circadian rhythm, or the body’s biorhythm that enables natural sleep cycles and time flows. My patients were also satisfied when I showed them their test results on the curved screen.

A: Our eyes adjust the thickness of the crystalline lens to maintain focus when the distance to viewed objects changes. The curved monitor offers similar eye-to-object distance at all angles, ensuring the eyes do not have to work as hard to readjust the crystalline lens to focus. Consequently, eye fatigue is minimized. This effect is especially beneficial to elderly users whose lens adjustment function has degenerated.

When looking at an object, our eyes attempt to vividly capture the environment around the object as well. In layman’s terms, there are parts that we “consciously see” and parts that are “seen.” When an object has a curved shape, the image is more easily captured on the retina. Peripheral areas can be seen clearly. This is the Horopter Theory, which is the same principle applied to popular curved screens in big movie theaters.

According to this theory, our eyes perceive objects arranged along the Horopter line as collinear and conversely, the eyes experience depth perceptive of objects arranged along a horizontal line. The curved monitor’s surface helps viewers perceive the middle and side edges of the screen along a single horizontal line, making the experience much easier on their eyes. Generally, when using three monitors at the same time, people arrange them in a curved configuration. This is due to natural instinct to bring out optimal images through the retina. Curvature also delivers psychological comfort by creating a sense of ‘hugging’ the eye, which enhances stability and concentration. 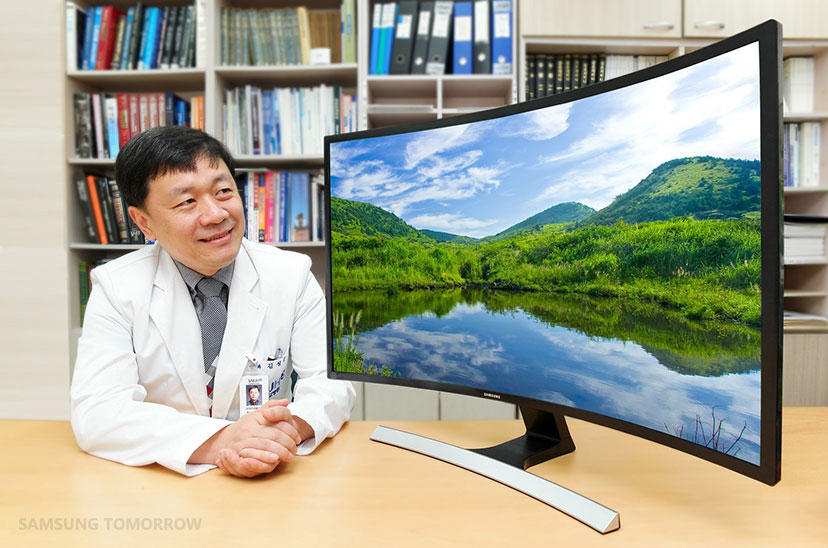 A Curved Display for Better Productivity

Learning Curve: The Design Story Behind the SE790C Curved Monitor