Sock, Horror – Mystery of Missing Socks is Solved! Scientists Reveal Why Socks Go Missing in the Wash and How Likely it is to Happen 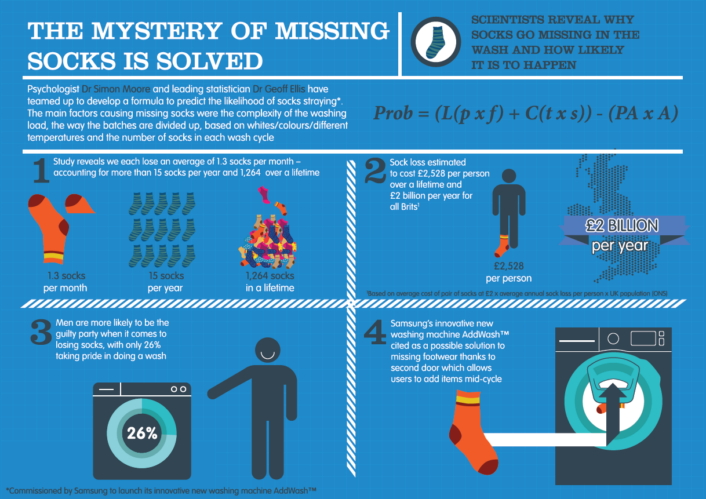 Leading scientists have unravelled the cause of one of life’s greatest mysteries by discovering the secrets of why our socks go missing in the wash.

And the research has led them to devise a mathematical formula to predict the probability of being left in a spin with odd socks after a washing load.

The study, commissioned by Samsung to launch its innovative new washing machine AddWash™, found Brits lose an average of 1.3 socks each month (and more than 15 in a year), leaving them with numerous mismatches. With the average Brit living to 81, according to ONS figures, these cleaning catastrophes lead to the equivalent of 1,264 lost socks each over a lifetime, costing the average Brit a whopping £2,528.

In all, these laundry losses mean around 84 million1  socks go missing around the UK every month. However, sock salvation is in sight. Samsung’s AddWash™ uses an innovative second door which allows users to simply drop in extra items during the wash cycle, providing a possible end to the problem of forfeited footwear.

To mark the launch, chartered psychologist Dr Simon Moore and statistician Geoff Ellis applied science to socks in a bid to discover the factors which contribute to washday blues and to quantify their findings in a mathematical formula.

Many fanciful theories have been put forward for these laundry losses, including theft by gremlins while Professor Stephen Hawking once speculated they may have fallen victim to spontaneously-created black holes.2

The team’s work – which involved a survey of 2,000 people who were happy to discuss their dirty linen in public, plus a series of in-depth face to face interviews – revealed:

Their work also helped them devise the following:

The higher the figure, the higher the likelihood of losing socks. For the truly diligent, this formula can also be adapted to work out the probability of losing a sock in a single week by using a calibrated version using statistical modelling software which adds constants thus:

P = The positivity towards doing laundry

A = Degree of Attention

Which is the sum how many of these things you do at the start of each wash check pockets, unroll sleeves, turn clothes the right way and unrolling socks

Melanie Rolfe, Head of Marketing – AddWash™ & Home Appliances at Samsung Electronics UK and Ireland said: “We believe this new study has finally solved the age old mystery of the missing socks. At Samsung we are changing the way we do laundry with the new AddWash™ machine. No longer will we load the machine with trepidation as we worry whether pairs will be separated forever. Now we can add those loose socks, and indeed any other item of clothing you forgot, in mid-wash to ensure everything stays together.”

Numerous interviews were conducted around the UK as part of the research to identify key psychological themes that contributing to losing socks in the wash. The following four trends were identified:

1. Diffusion of responsibility (“someone else has it covered”)

Simply put, when a task is shared among a group, the tendency is for individuals to assume someone else will take responsibility – so no one does. This was a key theme emerging from many of the households interviewed.

Heuristics are mental problem-solving shortcuts we use to save time and effort. For example, when we lose a TV remote we search in all the likeliest places such as under cushions. When socks disappear, we simply look in the easiest places and then assume the sock is lost forever.

This occurs where we tend to believe something is true if we want it to be true. So in this case, if we cannot see any odd socks, we convince ourselves there are no odd socks.

4. Behavioural errors of omission and commission

Human error accounts for many accidents, mistakes and mysteries, particularly in the wash cycle and these fell into two main areas:

Omission: where we fail to respond or do something when we should (leaving a sock on a bedroom floor, in the laundry basket or washing machine)

Commission: where we do something when we shouldn’t (throwing a lone coloured sock in a white wash, kicking a sock out of sight, balancing a sock drying precariously which might fall behind a radiator)

The research and survey were undertaken to mark the launch of Samsung’s AddWash™ range, designed to include an innovative door which allows extras items to be added during the wash – whether that’s a stray sock you missed, extra softener or a hand-washed garment for final rinsing.

3 The values obtained here are all coefficients created by modelling the sample in SPSS statistical modelling software.