This time we met up with the director of the Sound Lab. Meet Joong sam Yun, and learn about what it is like to be a sound designer at Samsung. He shares some tips, challenges, insights, and episode on working with some of the world’s greatest musicians, such as Quincy Jones. Let’s cut right to the chase. 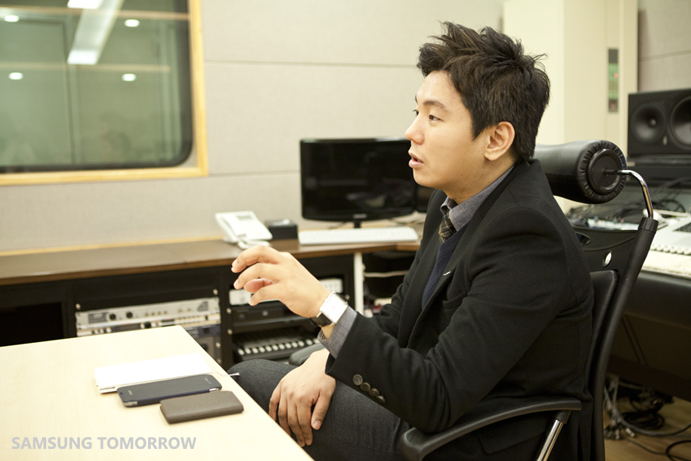 We’ve already discussed a lot about sound design and the Sound Lab with our viewers. However, we haven’t had a chance to talk about the artist, the sound designers. As a sound designer, what would be the most important quality to have?

I think the most important skills for sound designers are intuition and imagination. For example, when you are designing a sound for a brand new product, you need to have a concrete idea of the sound you want to assign to each function of the product. I think this is acquired through personal effort, such as practice and experience; it is not something you can learn in class. One tip for future sound designers would be to keep your ears open at all times. There is no such thing as an absolute silence. Even if you are in a solitary room with heavy soundproofed walls, you will hear your heart beat. The key is to pay attention to every sound you hear and analyze them, be imaginative and experiment with them.. Intuition is key.

Imagination is a really important skill in sound design as well. Sound design is not only about emulating an existing sound well, but also emulating a sound that doesn’t exist. For example, imagine when you wake up in the morning and get out of bed to pull the curtain open. You can see the sunlight coming through the window with a beautiful sound. However, there is no such sound as sunlight. Often times, sound designers have to imagine these kinds of nonexistent sounds to design an appropriate tone. 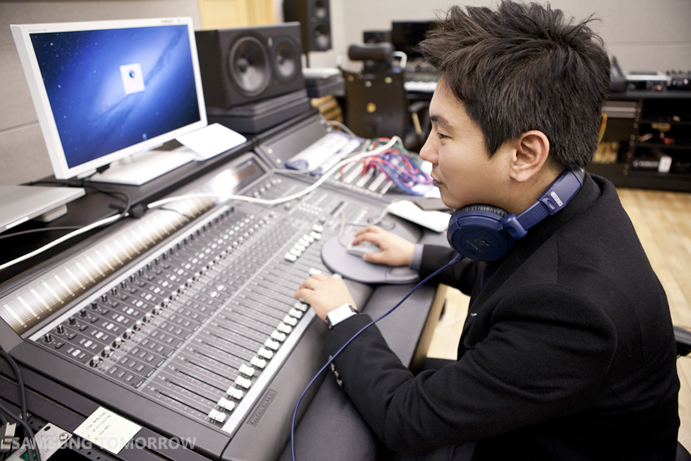 It has been emphasized that Samsung sound focuses on UX enhancement. Can you give us an insight or example of designing such sound?

There is a significant psychological aspect to sound design, which is partially why sound designers are referred to as auditory user interface designers. Sound needs to be beautiful and it needs to project emotions. However, sounds also need to serve the purpose of a device and to be helpful for users. For example, let’s say that a user is performing a task and he/she needs to decide between ‘yes’ and ‘no’. Sounds for each option need to make sense for users. The ‘yes’ sound needs to be perceived positively by users and the ‘no’ sound needs to be perceived negatively.

We also need to research how the interval, length or exposure frequency of sounds influences users’ perception of the sound. We run extensive research on the psychological aspect of sound when designing each sound element.

It feels like it would be somewhat harder to design short sounds rather than something longer like a ringtone, because it is so short. Is there any challenges designing a short sound?

Short sounds have the highest exposure frequency, like the touch sound. In some ways, these are the sounds that define the identity of the phone. Every fraction or a tenth of a second is crucial. There is no room for progression effects such as anticipations and climaxes. So the sound needs to be perfect. For example, we would even manipulate the frequency (sound wave) of a 1/100 of a second to perfect the sound we want to design.

Recently, we have been trying to improve ‘non-visual’ sounds. Non-visual sounds allow people to realize the function of the device without any visuals of the device. This could be helpful for people who have wearable devices or people with disabilities. This is also inevitable, because wearable devices are going to be more popular in the future. With wearable devices, people will not want to look at their devices, which means the audio feedback is going to be very important for UX in the future. UX is always going to be the most important factor. Therefore, we are really working hard on developing great ‘non-visual’ sounds.

Samsung Sound Lab’s Galaxy Music Project was famous for its collaboration with internationally known artists. How was working with Quincy Jones, the man who produced Michael Jackson’s Thriller!?

We’ve worked with a variety of artists on the Galaxy Music Project. We try to give our users a variety of sounds and one of the best ways to do that was collaborating with some of the world’s greatest artists. As you said, we had the honor to work with the legendary Quincy Jones. We explained our inspiration and background for the song ‘Over the Horizon’. Then we asked him to reinterpret or remix the song. When he showed us his version of ‘Over the Horizon’, we were stunned, because it was absolutely amazing. He is a legend for a reason; it was a very humbling experience to work with him.

I think it is important for sound designers to protect their ears. Inevitably, our profession requires extensive use of ears, so they get damaged more easily. However, if you are a professional, you have to take care of this valuable asset.

People think that because I’m a sound designer, I go home and listen to a lot of music and enjoy all the sounds that exist. However, it is totally the opposite. At home, I tend to enjoy silence as much as I can. For example, I play video games with the sounds muted. When I want to listen to music, I try to enjoy it through the best sound systems to get the best quality of sound.

OK. Final question, what can we expect from Samsung Sound Lab?

The ultimate goal of sound designing for us is to make a sound that is as natural as possible and as useful as possible. Additionally, we want to design a sound that people love. For example, when we design a ringtone, we want it to be more than just a ringtone. We want people to love it as a sound itself. A sound that people want to hear and look forward to hearing the next sound we design, is the sound we desire to design.

There you go. That was the finale of the ‘Sound Design Essentials’! It was a great pleasure to bring you the in-and-outs of the sound design and Samsung Sound Lab. Special thanks for Samsung Sound Lab sound designers and Joong sam Yun for participating on this journey with Samsung Tomorrow. We hope to hear from everyone soon. Thanks!