When you first lay your eyes on the SyncMaster monitor series 9 (SA950 / TA950), you may think you are looking at beautiful works of art, not just a high-tech gizmo. The unique and unexpected curves of series 9 are further accentuated by the asymmetrical neck, leading into series 9’s signature glossy metal-like stand. In the meanwhile its slim bezel makes the screen seem bigger for a more enhanced and immersive 3D experience.

Along with its many functions(including picture quality, TV functions, 3D functions etc), the Syncmaster monitor Series 9’s ground-breaking asymmetrical design that is as cutting-edge as the technology it holds inside may be one of the most outstanding features. It’s no wonder that it’s been a smash hit ever since its debut at CES 2011. 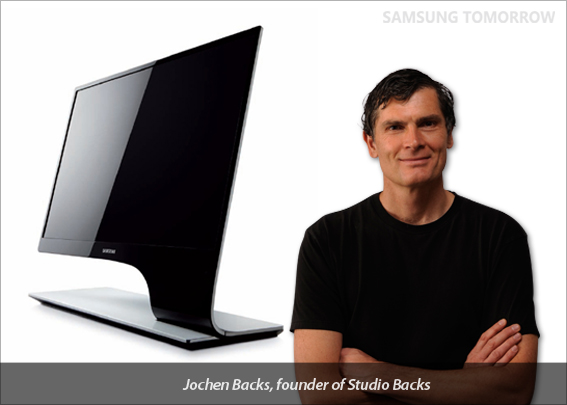 Behind this eye-catching design is Jochen Backs, founder of Studio Backs, a San Francisco-based design consulting firm. Originally from Germany, Backs moved to the United States with an interest in working on high technology-focused design projects. With a 20-year career that includes numerous awards, Backs designs highly iconic and recognizable lifestyle-centered products.   What better way to learn about the new monitor than an interview with the designer himself?  See what Mr. Jochen Backs has to say below:

See what Mr. Jochen Backs has to say below:

(Excerpt from ‘Samsung Tomorrow TV’, a weekly show on our Korean Blog)

The script below is a full run-through of our interview with Mr. Jochen Backs:

Q. Tell us about the SAMSUNG 950 LED Monitor:

A. The 950 is a monitor which can be used for a variety of applications, ranging from business to home usage.  It can be an all-purpose monitor for gaming, TV viewing, movie watching and general computing. The proprietary Samsung 3D panel allows instant converting from 2D to full HD 3D mode. It allows users to view old 2D home videos or vacation pictures and converts the content instantly from 2D to 3D with the Samsung 3D glasses and blue tooth connection sync between the two. Glasses are being shipped with the package. The monitor is currently available in two different sizes, 24inch and 27inch, as both a stand-alone monitor as well as with a built-in TV tuner as HDTV monitor.

Q.  What were the design challenges?

A. The first challenge of the 950 Monitor design was to highlight the new LED technology and bezel thinness, its aesthetic benefits, and overall newness. The second challenge was to create a completely new iconic image for Samsung in an already highly saturated and competitive market. The third challenge was to create a monitor which established Samsung as a leader in this technology and application by creating something completely new and innovative; true to Samsung’s philosophy.

Q. What makes this an excellent design solution?

A. The simplistic and minimal design emphasizes the newness and technology by delivering a design in its most “essential” and “purest” form. With the design analogy based on a bending and folding a piece of paper, an origami-like inspiration, it makes the monitor appear “paper thin”. (Editor: Remember how the Samsung Series 9 Laptop was also inspired by a folded piece of paper?)

The display and stand are combined into a single object, as opposed to traditional monitors designed with an add-on stand.The paper-like display “grows” out of its base to create an asymmetrical, elegant and recognizable look, using a single sheet of brushed aluminum.
Lastly, the overall thinness of the monitor allows for slimmer and more compact packaging, which maximizes shipping quantities

These are some images that show the development of the design – from concept to final product. Exclusive! These are straight from the designer, you can’t find these anywhere else.

As discussed above, the main focus was to create a single object with an artisitic, asymmetric design. 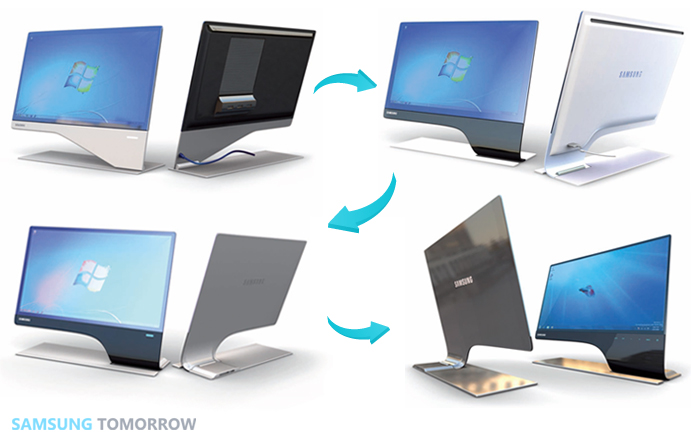 Notice how the angles were smoothed out to a curve while the back side slimmed out from a bulky black box to a slick single sheet of brushed metal. You don’t see any bumps or dents or holes or fans or… anything that isn’t suave. Our engineers deserve a lot of credit for realizing these designs. 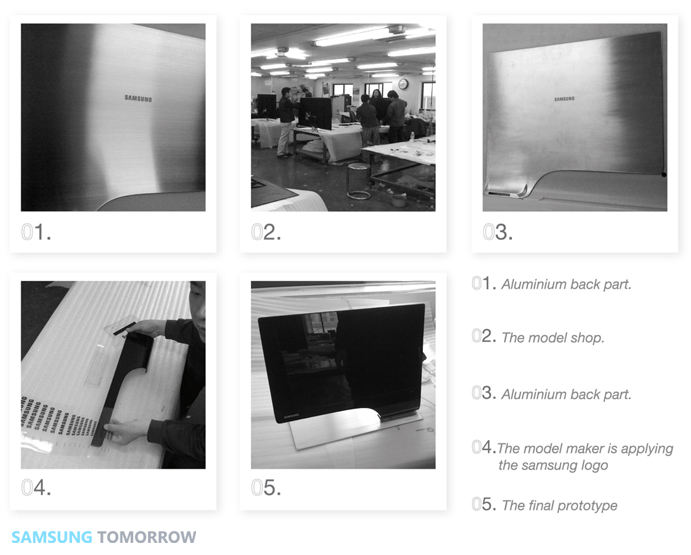 This is a behind-the-scene cut from the model shop. This is where the SyncMaster monitor Series 9 first came out of the desiger’s computer into the real world.

Hope you enjoyed this. We certainly did as it’s not every day we get to post stuff from our heavily guarded design archives. We’ll be publishing an infographic at the end of the week highlighting the inspiration and main design features regarding the SyncMaster monitor Series 9. So stay tuned!