Take Control of Your Games with Game Tuner

Playing today’s mobile games can give you the same feeling as if you were playing PC or console games. This is thanks to the rapid growth of mobile device capabilities, allowing gamers to enjoy high-quality games, which were once unimaginable, right in the palms of their hands.

Nevertheless, mobile games do have their own disadvantages. High-quality graphics games tend to drain smartphone batteries fast and very often generate heat. At the same time, if a mobile device is not equipped with the latest HW specifications, gamers may be experiencing a poor gaming experience due to, for example, lagging.

Samsung has developed an application, which can address these problems, and it is currently receiving a good deal of attention. The application is called Game Tuner and just like the name suggests, it is an application that helps users adjust their gaming environment according to their smartphone capabilities and battery performance.

The main objective of the Game Tuner is to help users playing games in an optimal environment by controlling specific elements that influence the gaming environment, such as screen resolution and frame rate. Game Tuner offers four preset modes: High, Medium, Low and Extreme Low, allowing the gamers to control their gaming experiences, along with the option of saving power. Games that once were not as enjoyable as they could be because of slow speeds or high battery consumption can now be played in a more pleasant environment thanks to these simple modes. 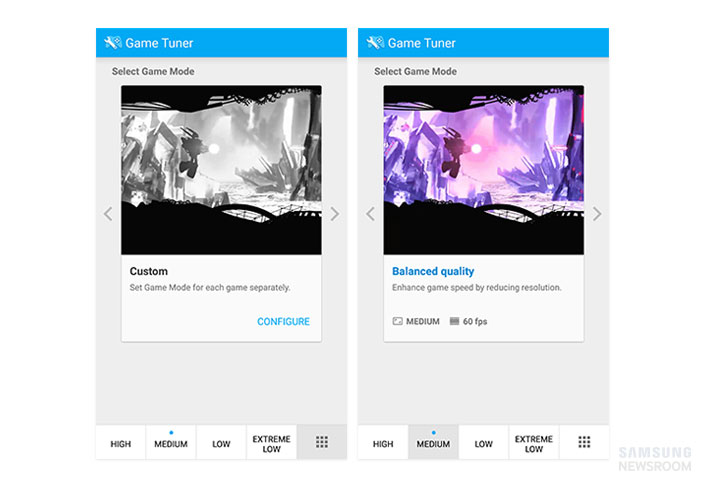 Samsung conducted an independent survey and confirmed that there was a big savings on battery consumption when Game Tuner was used to control the screen resolution and frame rate. A high-quality graphics game that consumes a lot of power can be enjoyed for a longer period of time and in a more pleasant environment by using Game Tuner.

For advanced game users wanting to be more in control on how to set the modes, Game Tuner also offers a Custom Mode, which allows them to customize individual settings, screen resolution and frame rate. Additionally, those settings can be specified for each game, so that each game can be played more efficiently. 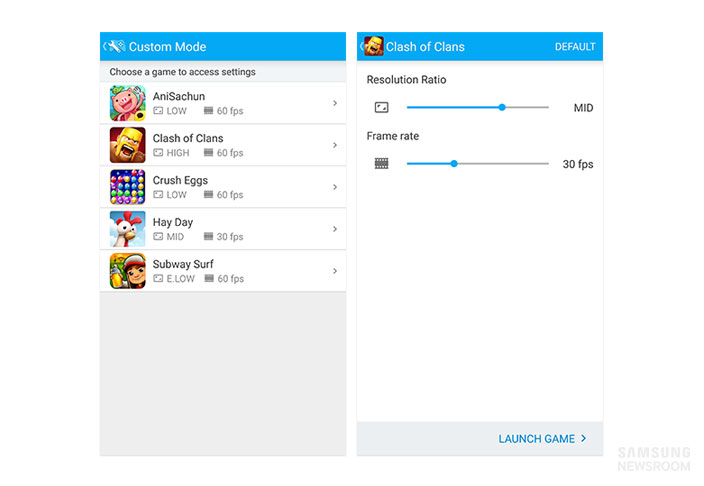 Here are a couple of tips when using Custom Mode. First, it is best to optimize the screen resolution to fit the game. For instance, in case of WQHD resolution devices (2560×1440), if a game was developed with HD resolution (1280×720) in mind, then the phone’s resolution should be set to Low. For a game with FHD resolution (1920×1080), then Medium is more adequate. Even if the resolution is set higher, the user will not experience much difference. The resolution can be adjusted according to power consumption and the game environment. 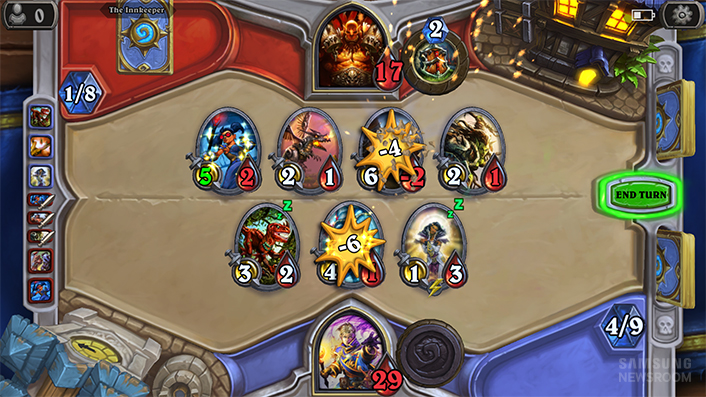 A few rules also apply when adjusting frame rate. In general, human eyes perceive screen movement of more than 30 frames per second to be “smooth.” For this reason, when enjoying simple games, such as puzzles or card games, it is recommended that the frame rate to be set at 30 frames per second. For games that emphasize impressive and detailed movements, like action games or fighting competitions, it is better to increase the frame rate.

With traffic to the Game Tuner server greatly increasing these days, the application is enjoying great popularity, just a month after its launch. The Game Tuner application can be used on Samsung devices such as the Galaxy S6, S6 edge, S6 edge+, S5 Prime, Note5, Note 4 and Tab S2. More devices will be added gradually.