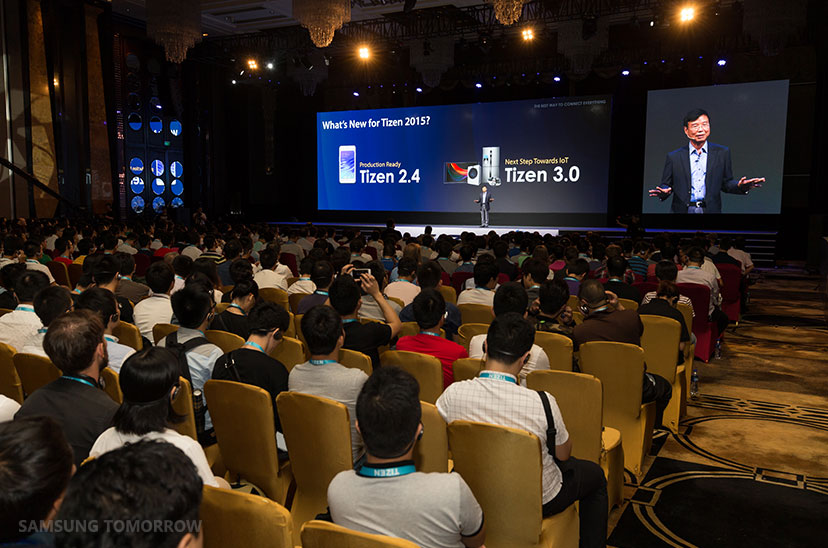 Tizen Developer Conference 2015 (“TDC 2015”) is taking place September 17-18, 2015 at the Sheraton Futian Hotel in Shenzhen, China, with more than 1,000 participants, including app/platform developers, entrepreneurs and experts in related fields.

Set in China for the first time, the fourth TDC is being attended by top Chinese IT companies, like Tencent and Baidu, along with global technology leaders, such as Samsung Electronics, Intel and Unity.

Held under the slogan of “Tizen, The Best Way to Connect Everything”, TDC 2015 includes keynote presentations from six leading IT experts and 38 sessions for technical discussions across different IT fields, including app development, design, gaming, television, the Internet of Things (IoT) and wearable devices.

TDC 2015 highlights Tizen’s competitive edge as a technology platform, introducing IoT strategies based on Tizen and defining the future roadmap of the platform. In addition, the event is unveiling the efforts being made to spread Tizen across diverse industries, as well as future plans to better promote cooperation with businesses in China.

“We’re thrilled to be holding the Tizen Developer Conference here in Shenzhen, the heart of the Chinese IT industry,” said Hyogun Lee, Executive Vice President of the Software R&D Center at Samsung Electronics, during his keynote speech on the first day of the event. “Through the different presentations, technical showcases and demonstrations, developers and partners will be able to connect and learn more about Tizen. We look forward to the many creative ideas that will stem from these sessions, as well as the many business opportunities that Tizen will bring to the Chinese market.”

“Baidu and Samsung engaged in technical cooperation regarding Tizen platform. As a result, we laid a very solid foundation to jointly create a developer-oriented ecosystem that includes mobile and smart wearable devices. We hope this vision of the IoT, based on Tizen platform, will be realized in the near future,” said Liu Jun, the Vice President of Baidu, during another keynote address at the conference.

In particular, TDC 2015 unveiled the Tizen 3.0 platform to further expand device interoperability for the full-fledged IoT era. The Tizen 3.0 platform is designed to support not only mobile devices, wearables, and TV sets, but also Micro Profile, a platform that enables simple home appliances to interact with the IoT.

Additionally, Tizen 3.0 platform is compatible with an even larger spectrum of devices through IoTivity, a project sponsored by the Open Interconnect Consortium (OIC).

The event venue is also hosting an exhibition zone. Samsung is introducing many new devices and Tizen-based wearables, including the Gear S2, and TV sets, while businesses like Unity and Chukung are demonstrating game engines that are compatible with Tizen. Major features of the recently unveiled Tizen 3.0 platform are also on exhibit.

An annual event, TDC brings together Tizen platform and application developers as well as experts in the field to discuss overall technology trends.

For more details, visit the event’s official website at www.tizenconference.com.

※ Wayland: Wayland is a protocol designed to be a simpler replacement for the X Window System (X11). Compared to X11, it offers better performance and scalability.

Open Interconnect Consortium (OIC): The industry group focused on improving interoperability and defining the connectivity requirements for the billions of devices that will make up the Internet of Things (IoT).

IoTivity: An open source project sponsored by the Open Interconnect Consortium (OIC) and hosted by the Linux Foundation. It is a software framework that enables connectivity for the emerging needs of the IoT.