[Interview] The Brightness of Stars: The Making of the SUHD TV 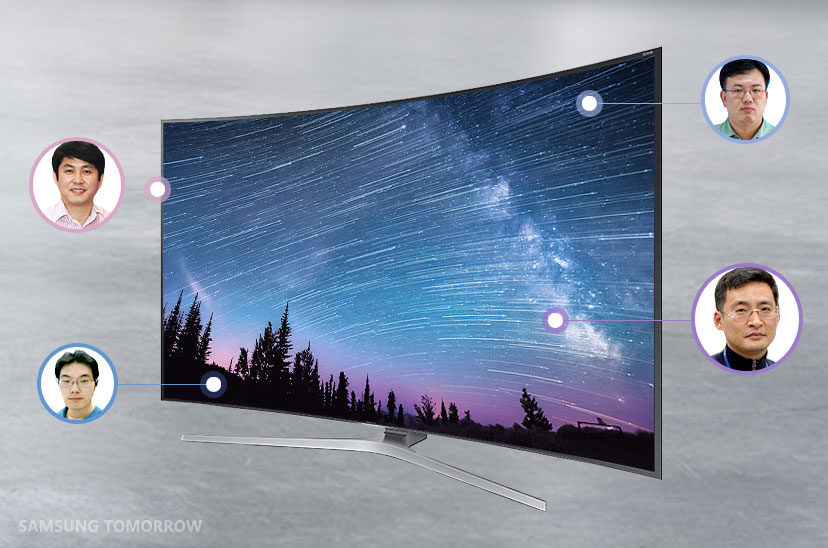 It is a term often used to describe the televisions built by Samsung’s Visual Display (VD) Business, but it also applies to the lives of its engineers — it’s an immersive experience.

If you’re an engineer at Samsung’s VD Business, when you go to a movie with your family, you don’t just watch the film — you watch the screen. In a movie that takes place in outer space, how do the stars and the moon pop out in the darkness of the galaxy? How rich and true-to-life are the colors in scenes that take place in a vibrant, bustling market? More than that, you may go to see the same movie at different theaters to compare different types of projectors.

This is the life of Samsung engineer Simon Lee, who says his frequent tinkering and experimenting with the picture settings on the family’s home TV does not go unnoticed by his wife and kids. Lee is part of a team of engineers who have devoted their careers to creating a TV picture quality that is as close to reality as possible. “Sometimes I can’t help but continue my job when I’m at home,” says Lee, who, like most people who are passionate about their jobs, cannot always turn off his fascination and curiosity when it comes to his work. “Sometimes I get really good feedback from my wife and kids, who might see things differently,” he says with a laugh. Being a Samsung engineer also means never being satisfied. In a highly competitive industry, the technology is always evolving.

This year’s line of SUHD TVs are equipped with the most advanced picture that Samsung has ever developed, with Nano Crystal technology for a wider gamut of colors, and High Dynamic Range (HDR) for advanced brightness and contrast. When Samsung adopted Nano Crystal technology for its latest line of televisions, it was something akin to giving an artist a larger, more robust color palette to work with. The result is a more vibrant viewing experience for consumers. But beyond just improved color range, the SUHD TV has 2.5 times better brightness due to HDR. The SUHD Remastering Engine is a proprietary technology that displays content the way filmmakers intended. Add to that a superior panel, a new BLU algorithm and remarkable color detail, and it is clear that Samsung has created a truly groundbreaking, in-home cinematic experience. The SUHD TV’s image processing technology allows the content to adequately utilize the expression capabilities of the display and produces stunning detail with rich and accurate color remapping.

“In 2002, the Samsung Advanced Institute of Technology started working on the development of Nano Crystal technology,” says engineer KyeHoon Lee. “In 2010, Samsung decided to apply the technology to a premium consumer device. In 2012, the company finished the development of the technology, but we reconsidered the usage of Cadmium because we found that there was a movement to tighten environmental regulations for electronic devices. Though Cadmium was not on the list of prohibited materials for electronic devices at that time and it might not be added to the list for several years, we decided to drop the use of the material and started developing a replacement material.” Lee adds that, in reaction to these environmental concerns, Samsung decided to phase out the material immediately, even though the European Commission granted a grace period before it was prohibited.

In all, it took 14 years to develop Nano Crystal technology, and about 150 critical patents were secured along the way. Samsung engineers knew that these Nano-scale crystals, which emit different colors when illuminated, were the key to incredibly rich and accurate colors, but they are also very vulnerable to oxygen, water and heat. The team struggled to find a solution, with some believing that the only environment suited for such a process was outer space. It took more than two years to figure out how to envelop and protect the Nano crystals, which are hundreds of thousands times smaller than the width of a human hair, while not compromising picture quality. Samsung engineers had to produce a film of very precise thickness as part of a very difficult coating process.

“It requires a very thin layer that covers the core material,” says Samsung engineer KyeHoon Lee. “In order to apply Nano Crystal technology to display products, this protective material needs to be produced as a large film that is the size of a TV. And the thickness of this film has to be accurate to within one-fiftieth the width of a human hair.” 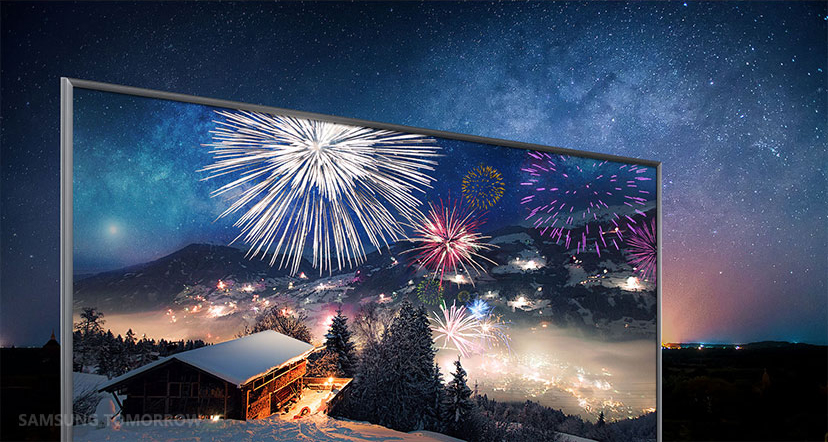 With HDR, Samsung engineers have created a TV that is exceptionally bright—up to 1,000 nits. This is believed to be optimal for delivering the best picture quality in the home. However, the reason HDR is able to deliver a stunning visual display is due to its contrast. HDR is what allows the stars and the moon in space to shine remarkably bright in the complete darkness of space, or for a lighting strike to seem almost real. This is due to brightness data, calculation data and backlight control of content, which allows SUHD to overcome brightness expression limits and can display all types of light, such as radiant sunlight or sparkling stars in the night sky.

The level of brightness is vital for good picture quality, and the SUHD TV’s range of brightness expression is 2.5 times better than conventional UHD TV models. This allows clearer expressions of scenes like dazzling sunlight, spots on the moon and starry night skies.

Collaborations with film and television studios such as FOX were also critical to the development of SUHD TV. Until now, there was very little content being produced for television that could truly take advantage of SUHD TV technology.

Samsung engineer Kilsoo Park says, “Previously, directors and producers used regular TVs for mastering their work in the filmmaking process. Now, they are using our SUHD TV, which gives them more options for color and brightness. This way, their creative intention is expressed more accurately when viewers watch at home. And if producers create films with the capabilities of SUHD in mind, knowing that a TV exists that can truly convey the visual aesthetic they are looking for, we will technically be affecting the ‘sources’ of content, as well. And this is what makes Samsung different from other companies.” To deliver truly innovative picture quality, device and content technologies need to be developed as well. Samsung has invested in developing the full UHD ecosystem through the UHD Alliance.

For the teams of engineers in the Visual Display Business, SUHD is the result of years in the laboratory as well as countless hours spent watching television screens, scrutinizing pictures and taking optical measurements using the most high-tech equipment to perfect the product. But, such is the nature of the television industry — there is no time to stop and celebrate.

“In reality, there are always new goals and projects coming in,” said engineer SeHyeok Park. “So there really isn’t any time to celebrate each achievement. Also, we aim to challenge relentlessly and always try to stay prepared for the next one. So, rather than being content for the present, our company focuses on moving towards the future.”

According to Kilsoo Park, the multitude of teams that worked on the SUHD TV were always united by putting the needs of the consumer first. “When we need to make decisions, we agree to stand by the consumer’s perspective and make the right decisions for them. For example, we consider what value can be brought to consumers. When a product is created solely from an engineer’s viewpoint, consumers might find it difficult to relate to the product. This common philosophy is what allows teams working separately to work out.”

The Samsung SUHD picture quality could only come to fruition through the dedication and teamwork of the company’s engineers, as well as the partnerships formed with content producers. It’s all part of an effort to make a picture quality that comes ever closer to reality.