The Future Is Clear : The First Mass Production of Transparent LCDs

Do you remember the scene from “Minority Report” where the investigators freely move, zoom in and out of, and switch between images on a see-through screen? We often think of transparent displays as futuristic, but amazingly, not only have these technologies already been developed, but Samsung has already started mass production of similar products. 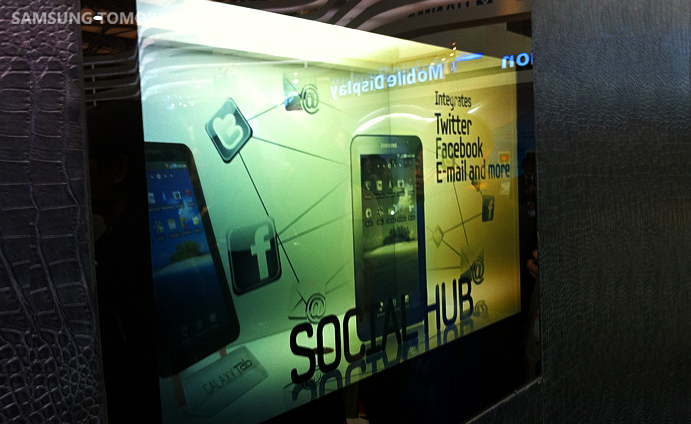 In March 2011, the Korean Ministry of Knowledge Economy announced transparent displays as one of the 6 technologies that will lead the future of the industry. This business is expected to be a huge piece of economic pie as its worth is predicted to grow up to $87.2 billion by the year 2025.

To kick it off, Samsung Electronics began mass production of the world’s first transparent LCDs in March. We will introduce two types: a 22inch color LCD panel, as well as a black and white one. (Both support a 500:1 contrast ratio and a WSXGA + (1680X1050) high resolution)

So what’s so special about Samsung’s new mass-produced Transparent LCD?

The new transparent LCD panels boast the best transparency rate in the business with 20% for the black and white LCD and 15% for the color LCD, which are considerably higher than the 5% for the existing ones that use back lighting.
The new LCD is equipped with such a high transparency rate that you can literally look through it like an ordinary glass.  This cuts 90% of the power consumption compared to backlit LCDs because this model can utilize ambient light sources from its surroundings like the sun instead of having to light up the screen from the back.

Where can these transparent displays be used?

Transparent displays have a big advantage in advertising, where they can effectively present the actual product along with related information. This will be a big upgrade for show windows and outdoor ads, allowing innovative advertising strategies. There will also be uses in education and business as the transparent LCD enables real-time communication to both sides of the screen using a single display. In addition, it has further potential uses in various areas such as in car windshield navigation and mobile devices like tablet PCs. The possibilities are endless. 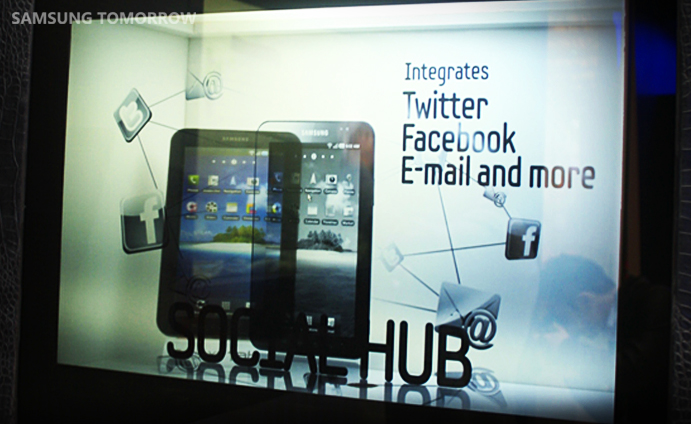 The photo above shows two Galaxy Tabs where one is the actual device and the other is only an image displayed on the transparent LCD! Can you tell which one’s which?

Now can you tell?

“Transparent displays will have a wide range of use in all industry areas as an efficient tool for delivering information and communication. With the world’s first mass production of the transparent LCD panel, Samsung Electronics plans to lead the global transparent LCD market by developing various applications.”

Even more exciting for the future, Samsung Electronics is also developing and researching various innovative displays that can be bent and folded! We’ll talk more about this next time.