The New Series 9: Slim Inside and Out

The people at Samsung have taken upon themselves to tear apart a second generation Series 9 Notebook (13.3”), so you don’t have to, of course. 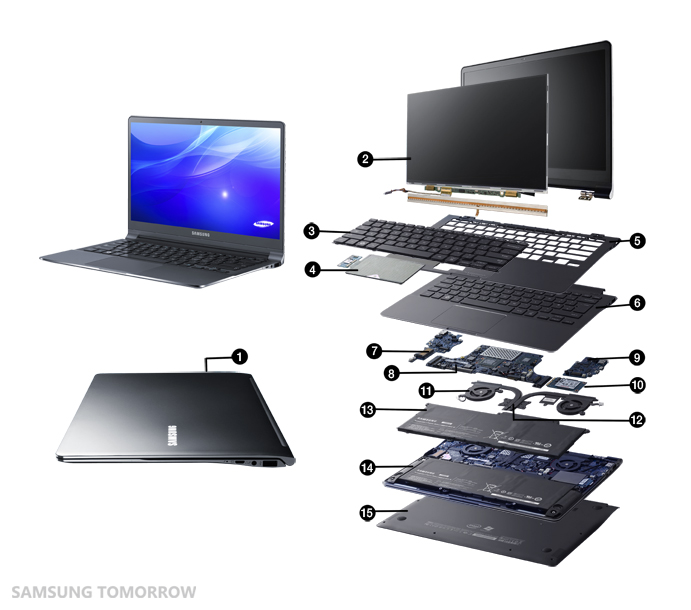 Featuring a slim, stylish design, many consider the New Series 9 the premium laptop that’s leading the pack in the highly competitive ‘ultra slim & light’ category of notebook computers. So how is this amazing slimness achieved? Maybe what’s inside might offer some hints.

The predecessor uses plastic for the keyboard and duralumin as well as other materials for the outer shell, but the New Series 9 is entirely covered by a sand-blasted aluminum and features a seamless ‘Single Shell Body’ to achieve a sense of sophistication.

Although the first Series 9 was slim, the New Series 9 is 28% slimmer, thanks to a thinner LCD and a customized main board among others. 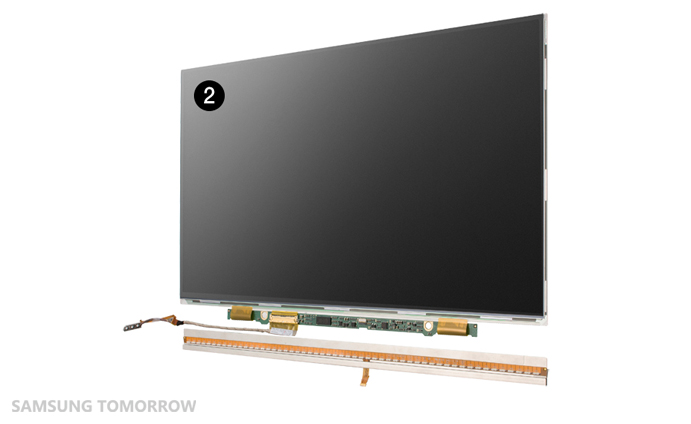 The Series 9 13.3 inch LCD is the first to feature PLS technology for a screen viewable from all angles. To minimize thickness, an integrated thin LGP was used to for the backlight and open-cell that make up a LCD screen.

Numerous tests were performed to reduce the thickness of the keyboard. One of the solutions was to decrease the stroke level from 1.5mm to 1.35mm by retaining a good feedback from the keys itself when typing.

Also, the keyboard backlight is achieved with Samsung’s organic light-emission technology instead of the usual LED, a first for laptops.

Even the touchpad was customized using a PET type rather than the PCB type for 40% more slimness.

The area surrounding the touchpad and keyboard was precision cut using the same sand blasted aluminum for a unified look and feel all around.

To realize additional thinness, a 0.7mm one-sided PCB has been applied. Despite the 16% reduction of thickness, the main board is still fitted with the latest CPU, chipset, SSD and more.

Surprisingly, it was possible to implement the DDP memory module on the main board for 4GB of memory. On top of that, a full size 4-in-1 SD multi-card reader has been applied rather than a micro SD reader.

To fit the most important connectors such as USB, audio,LAN, HDMI and others into a slim 12.9mm thin laptop,all parts had to be custom made for the New Series 9.

With the WLAN antenna and Memory Shield Can it is made possible to prevent interference for a superior WLAN performance.

The SSD (rather than HDD) plays a significant role in decreasing overall booting time to a mere 9.8 seconds.

The fan is one of the most important parts of a laptop. The New Series 9 features two 4mm thin cooling fans for a smooth and silent operation. Commonly for ultrathin laptops is just one cooling fan for a unit.

The heat pipe acts to disperse the heat from the CPU,and like the fan, it plays an essential role within the New Series 9.

With a built-in lithium-polymer battery, both slimness and longer battery-life have been reached.

To fit numerous components into a limited space, all components have been optimized with the 12.9mm thickness in mind.

The sand blasted aluminum makes it lighter and slimmer than its former Series 9. The design originality of the side curves from the former Series 9 also allows the New Series 9 a better grip on the move.