Samsung Tomorrow is featuring a series of editorials by some of the leading designers and engineers who made the Galaxy S6 and S6 edge a reality. In the sixth and final installment, Kwangjin Bae, Principal Engineer at IT & Mobile Communications, explains the advantages of the new glass and metal used to make the Galaxy S6 and the major obstacles that had to be overcome.

It is a demonstration that often leaves people in awe. A full grown man attempts to break a thin glass plate by bending it with both hands, even stepping on it for extra leverage. He then picks up the aluminum brick and slams it with great force on the glass plate. When all is said and done, both the glass and the aluminum remain in immaculate condition. These are the materials we used to make the Galaxy S6 and S6 edge.

When we developed the Galaxy S6 and S6 edge, the goal was to make Samsung’s latest flagship smartphone as strong and durable as possible, beginning with the metal chassis.

There were two missions that had to be completed with regard to the Galaxy S6 metal material. It had to be strong, yet it also had to be possible to make it elegant in post-processing (surface treatment). The metal handset itself is not a new idea, but the new phone had to have far superior functionalities than the existing products in the market. In short, the material needed to be thin and powerful. So we used 6013 aluminum, a high-strength aluminum alloy. This was the first time this kind of aluminum was used in a smartphone.

Why did we choose 6013 aluminum? A brief demonstration makes it obvious. The photo below shows the results of us banging together two types of aluminum: 6063, which is the standard type of aluminum used in electronics, and 6013. As you can see, the 6063 block has deep dents while 6013 survived with only minor scratches.

6013 aluminum — which is typically used in products that require high durability, such as aircraft parts, submarines, mountain bikes and yachts — is 1.5 times stronger and 1.2 times more durable than 6063.

The flip side of 6013’s strength is that it is difficult to work with in post-processing (surface treatment). We typically use a process called sandblasting in which a fine ceramic powder is used to create a luxurious matte finish. But because the aluminum was too strong, it was not easy to create a consistent surface. We had to develop a stronger method than the one that had been used previously, and numerous tests were carried out in order to find the optimal particle. 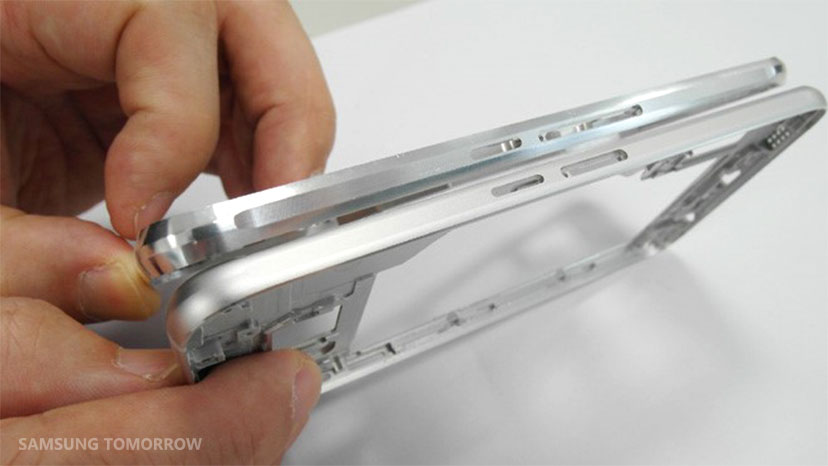 Before (top) and after (bottom) the sandblasting process

But our challenges did not end there. To make matters worse, the anodizing method we had used to process the exterior of our smartphones in the past was leading to the yellowing of the surface color. Anodizing creates a film on the surface of the metal so that color can be added. A chemical process is required to ensure the color is absorbed evenly.

We were faced with the prospect of having to completely discard the existing technology that had been used in mass production over the last several years. In the end, our equipment had to be changed to accommodate the new conditions. The new metal certainly presented some significant challenges, but in the end we were able to overcome the obstacles.

The photo below shows a 320-gram aluminum plate before processing on the left. After precision processing that required 20 different phases, we arrive at the 15-gram piece of strong yet thin metal on the right. It is no so dissimilar from a craftsman working on a gemstone to produce a gem. 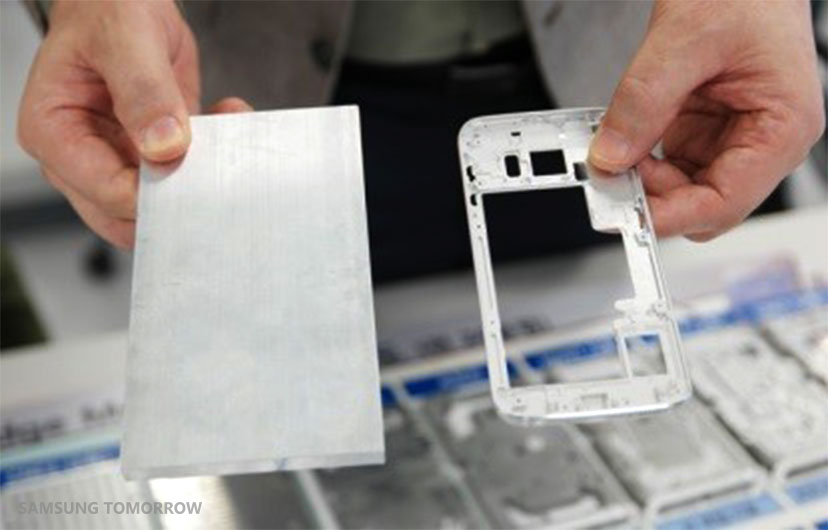 The Galaxy S6 edge may very well be the epitome of 3D glass technology at its finest. The dual edge design uses Gorilla Glass 4 that is even thinner than the glass used for the Galaxy Note 4 Edge. Gorilla Glass 4 is a reinforced glass that is strengthened using a process in which the glass is soaked in chemicals. The sodium component of the glass is replaced by potassium, which has a larger molecule particle. The reinforcing processes give the glass stronger resistance to external shocks.

Samsung’s unique 3D thermoforming technology also played a vital role but determining the right temperature and pressure was very difficult. When we raised the temperature, the glass surface crumpled and when the temperature was set too low, the glass broke. We had to find the optimal 3D thermoforming condition to make certain that the surface quality was even and the precision degree of the measurement was right. After dozens of trials of making the molding frame with the right temperature and pressure, we were successful in producing the optimal 3D thermoforming condition that ensured we could get it just right. For the Galaxy S6, the 3D glass was molded at a temperature of 800℃ and machined to precision. The glass endured 15 sophisticated processes, including forming, machining, polishing of interior and exterior surfaces. 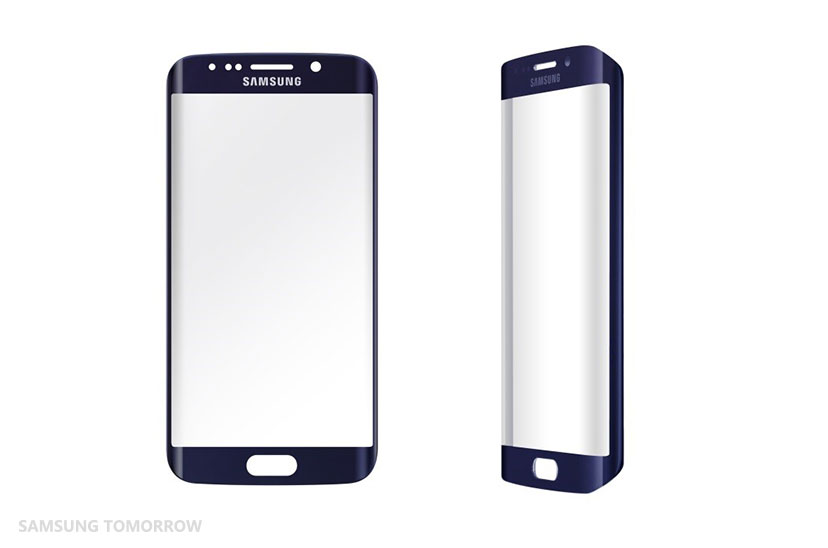 The development team for the Galaxy S6 worked around the clock. It was one of the most difficult times of my life and all the members of the group from bottom to the top worked together as one in developing the new product. It was not an easy task because it was unchartered territory for all of us. Based on the experience of developing Galaxy S6, we promise to continue to deliver products with differentiated values to consumers in the future.

Principal Engineer at IT & Mobile Communications