[The Sound of the Future] ② Get Immersed in Deeper, Richer Audio with Samsung Soundbars

With the emergence of big-screen and high definition TVs that offer spectacular visuals, the importance of sound quality – the finishing touch to providing an immersive home entertainment experience – has become a renewed priority for users.

In addition to holding first place in the global TV market for fourteen straight years, Samsung Electronics has also maintained the number one position in terms of market share for soundbars.1 What’s more, Samsung’s ‘Q-Symphony’ feature now allows joint playback once a soundbar is paired with a television. With its ability to produce rich, immersive surround sound from both the TV speakers and the soundbar, Q-Symphony picked up the ‘Best of Innovation’ award at CES 2020.

Following on from our previous piece exploring the sound technologies of Samsung’s QLED 8K TVs, we present Samsung’s soundbar solutions, which are bringing dynamic surround sound to the home entertainment environment.

Until recently, using conventional TV speakers and soundbars simultaneously could lead to the audio playback getting out of sync with the scenes playing on the screen, meaning that TV speakers had to be muted when using a soundbar. However, Samsung’s 2020 QLED TVs are equipped with upper speakers, enabling simultaneous use of TV speakers and a soundbar. Furthermore, Q-Symphony technology has unlocked compatibility between the 2020 Q80T TVs (which include the moving sound feature for models 55 inches and wider) and the 2020 Q Series soundbars.

The idea for Q-Symphony started from an idea to provide higher quality surround sound by using the upper TV speaker in combination with a soundbar. To make this hybrid solution a reality, the sounds from the TV speakers and soundbar had to be synchronized in terms of timing and volume.

Moreover, in the latest technology, the respective roles of the TV speakers and the soundbar have been clearly distinguished to allow for better harmonization of sounds. While the soundbar delivers primary sounds such as human voices, the upper speaker delivers the ambient sound effects. In this way, the two devices avoid interfering with one another, and provide a richer sound experience.

Hearing is believing ­- experience the reality of Q-Symphony above.

The current top sound specifications for a home theater system are a 9.1.4-channel set-up, which would ordinarily require a total of 14 speakers. However, the top-of-the-line HW-Q950T Soundbar from the 2020 Q Series is capable of realizing these excellent channel specs with only four speakers. 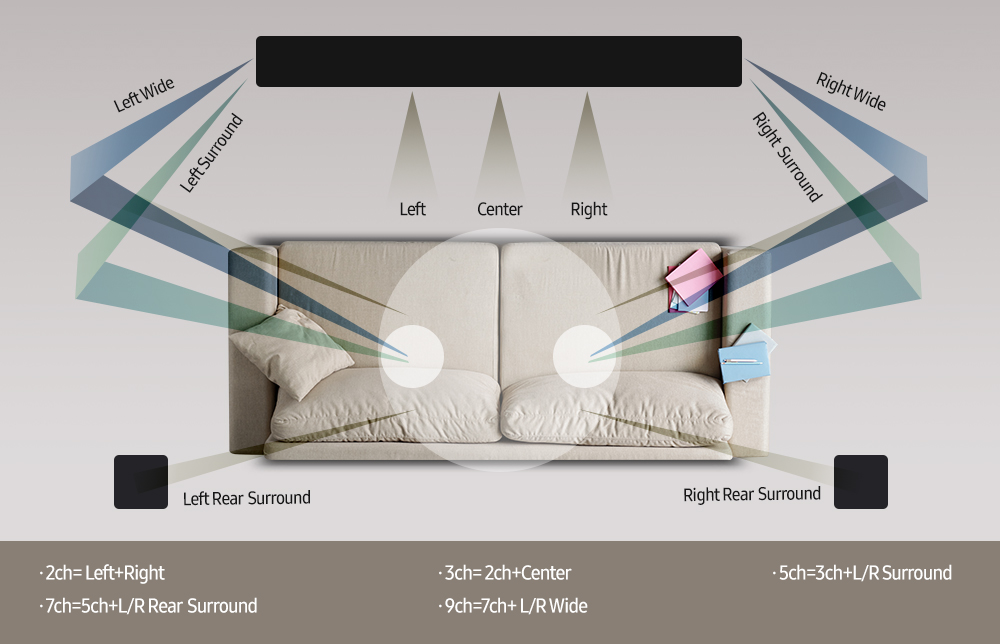 Dynamic Sound from a Wide Range of Angles

Representing the next stage in the progression from the HW-Q90R soundbar, the aforementioned HW-Q950T 9.1.4-channel soundbar, features two wide channels that deliver sound at angles of 60° to either side of the center. To provide fuller sound, the speakers at the far right and left, which provide the surround sound, have been moved to the edges of the soundbar. Furthermore, two additional speakers that are oriented at an angle that is optimized for wide channel functionality have been incorporated in the far left and right positions.

With wide channel functionality, users can benefit from sound being emitted from a host of different angles and benefit from a more complete audio experience. This effect additionally provides a broader sense of realism, and, by adding vitality to the movements on the screen, guarantees a better experience when watching content such as concerts, musical performances and films. 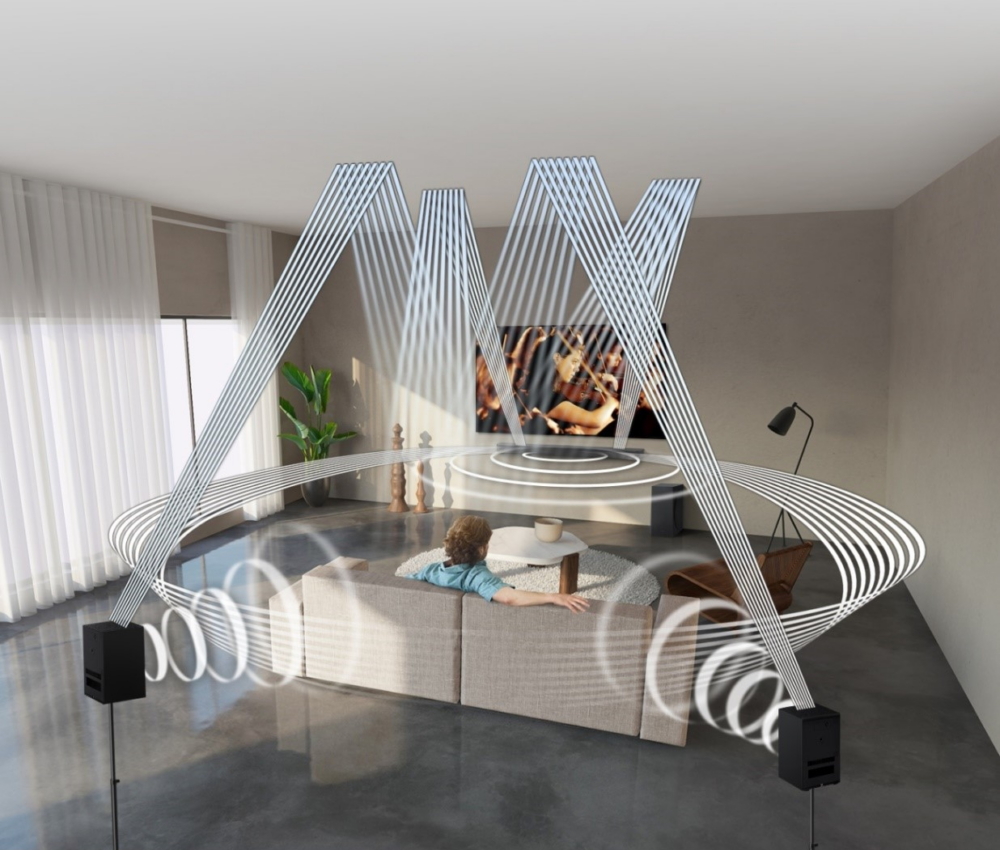 Before being finalized, all of Samsung’s soundbars undergo a final tuning process at Samsung’s Audio Lab in Valencia, California. The high-level expertise of the Samsung Audio Lab are well established, as was demonstrated when three of the lab’s papers were selected among the top 10 papers by the Audio Engineering Society at AES 2019. Likewise, Samsung more broadly is working to optimize users’ audio experiences by applying powerful, innovative technology to its soundbars.

Over recent years, the home audio experience has been constantly evolving and diversifying to offer users increasingly vivid sound experiences. Now, as the industry looks to realize the next stage in the evolution of sound, Samsung is providing comprehensive sound solutions for the future of top-tier audio experiences.

1 According to global market research firm FutureSource, from 2014 (the first year to officially include soundbars in the survey) until 2019, Samsung has maintained the top spot globally in terms of soundbar market share.