In this three-part video series, three members of Samsung’s Club des Chefs share their take on an everyday dish, the omelet. Club des Chefs is a team of Michelin-starred culinary visionaries from around the globe who contribute insights and expertise to help Samsung revolutionize kitchen appliances. This series features Club des Chefs founding members Christopher Kostow and Michel Troisgros, and world-renowned chef Daniel Boulud. Each chef will present their version of the omelet and how these masterful interpretations are easy to recreate using the Chef Collection series of kitchen appliances from Samsung.In episode one, chef Christopher Kostow creates his steamed omelet. Episode two features chef Daniel Boulud’s omelet farcie, and in episode three, chef Michel Troisgros shares his parmesan soufflé omelet recipe. Tune in to each episode to see how the Chef Collection series of kitchen appliances makes culinary excellence possible for everyone. 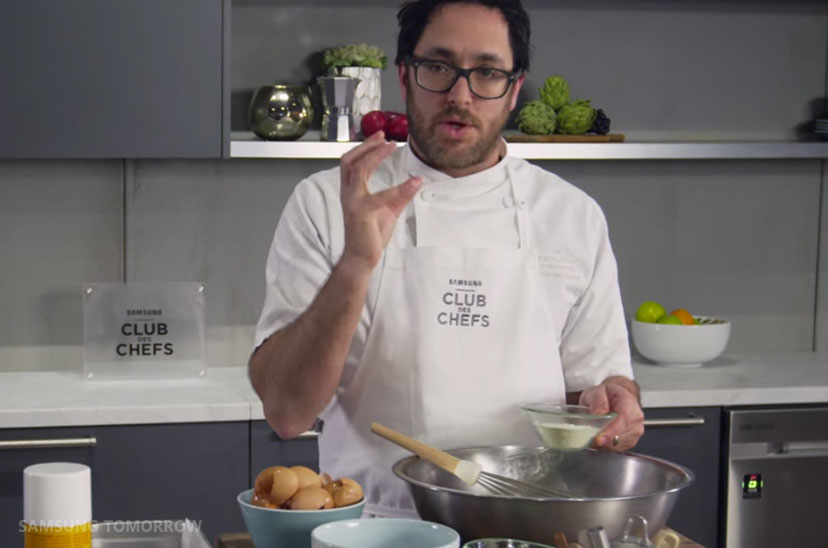 In the first of the three video tutorials, chef Kostow expertly steams his omelet using the Chef Collection Flex DuoTM oven range. With perfectly blended influences from both French and Japanese cuisine, chef Kostow ties it all together using local, seasonal wild onions.

Chef Kostow is an American chef, known for his emphasis on farm-to-table cuisine, made from locally grown ingredients, some of which he grows himself. As the Executive Chef at The Restaurant at Meadowood in Napa Valley, California, since 2008, he has been awarded three Michelin stars every year since 2011. He is only the second American-born chef and the third-youngest chef to ever receive a three-star rating in the Michelin Guide. He has received accolades from many of the country’s top food publications, including Bon Appetit, Time Magazine, and Food & Wine Magazine. In 2013, chef Kostow received the James Beard Foundation Award for Best Chef: West. Classically trained in France through apprenticeships, his dishes combine flavors from locally grown Californian, French and New American cuisine. He appeared on Iron Chef America in 2010, battling Iron Chef Cat Cora. Passionate about food in every part of the farm-to-table process, he believes the keys to great cooking are fresh ingredients and accentuating original flavors.

Watch the video to see how you can create the perfect steamed omelet, just like a pro.

A naturally gifted artist can create masterpieces, despite using primitive tools. For the many who will never receive the accolades of a Michelin-starred chef, the expertly designed Samsung Chef Collection makes feeling like one a little bit easier.

Collaborating with chefs who are among the best in the world gave Samsung insights into practical ways to improve kitchen appliances. The result is the four-piece premium kitchen appliance set, which includes the four-door refrigerator with Precise Chef CoolingTM, the Flex DuoTM oven range, the over-the-counter microwave-hood and the WaterWallTM dishwasher.

Chef Kostow believes the best dishes come from the freshest ingredients. The Chef Collection refrigerator has Precise Chef CoolingTM for maximum freshness with minimal temperature fluctuation within the range of 0.9 degrees Fahrenheit (or 0.5 degrees Celsius). It includes two different sections that cool at different temperatures for the crispest produce and the juiciest meats, fish and poultry. Also included is a 3-in-1 chef pan that marinates, cooks and cleans. 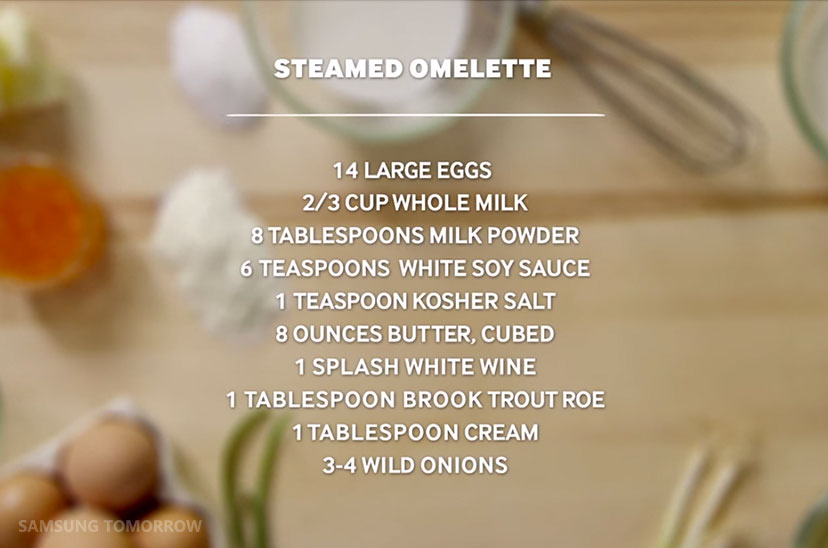 Start with eggs, whole milk and white soy sauce in a large bowl. Add milk powder. This will thicken the egg mix, giving a nice density to the steamed omelet. Whisk until all of the milk powder is dissolved. Using a pan lined with parchment paper, pour in the eggs. Put that pan inside a larger pan of simmering water. This will keep your omelet from cooking too fast or hard, allowing it to set like a light custard. Using your Chef Collection oven, bake for 20 min at 325F.

A beurre monte is a French preparation of sauce made from melted butter. First, on your Chef Collection range top, reduce white wine and cream together, then add butter. Next add your trout roe, or caviar. Delicately fold everything together, being careful not to break the fish eggs. After finishing the sauce, use a pan to sauté the wild onions in oil.

Slice the steamed omelet and add 4-5 slices per plate. Use a spoon to add beurre monte. Finally, garnish with wild onion.