In this three-part video series, three members of Samsung’s Club des Chefs share their take on an everyday dish, the omelet. Club des Chefs is a team of Michelin-starred culinary visionaries from around the globe who contribute insights and expertise to help Samsung revolutionize kitchen appliances. This series features Club des Chefs founding members Christopher Kostow and Michel Troisgros, and world-renowned chef Daniel Boulud. Each chef will update a classic dish and show how these masterful interpretations are easy to recreate using the Chef Collection series of kitchen appliances from Samsung. In episode one, chef Kostow creates his steamed omelet. Episode two features chef Boulud’s omelet farcie, and in episode three, chef Troisgros shares his parmesan soufflé omelet recipe. Tune in to each episode to see how the Chef Collection series of kitchen appliances makes culinary excellence possible for everyone. 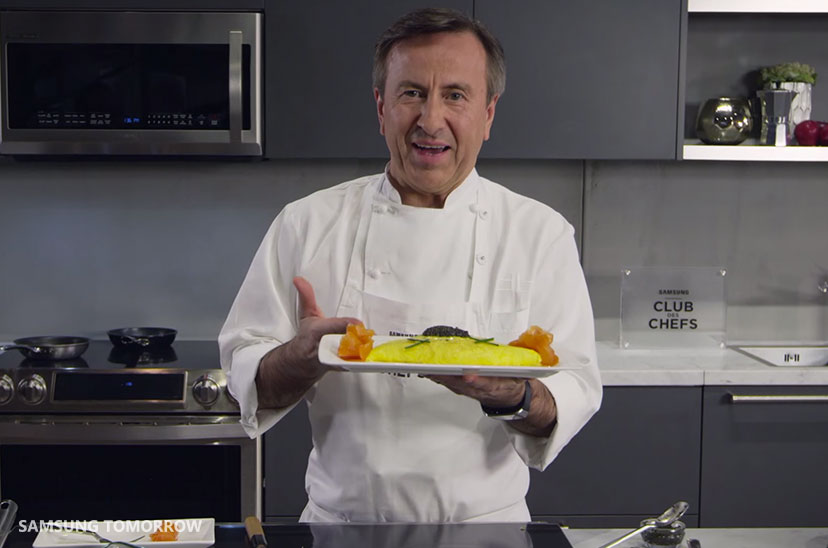 In the second of three video tutorials, chef Daniel Boulud presents his take on a commonly simple breakfast dish, the omelet. For chef Boulud, the quintessential omelet is the omelet farcie. Farcie is a French word meaning stuffed. In this case, the omelet is stuffed with scrambled eggs, a preparation learned during apprenticeships in Lyon. What chef Boulud really loves about breakfast is the ability to create amazing dishes using just a few ingredients. In his version of the omelet farcie, he combines the smokiness of salmon with the sharpness of lemon zest.

Although born and trained in France, chef Daniel Boulud is now considered one of leading authorities on cuisine in America. He focuses on seasonal gastronomy, or the use of fine ingredients. Since coming to the United States in 1982, he made his name as the Executive Chef at Le Cirque, receiving many awards and making it one of the highest rated restaurants in the country. Today, he is the chef-owner of several restaurants around the world, and is renowned for his contemporary twist on traditional French cooking.

Chef Boulud’s namesake restaurant, DANIEL, in New York City, is rated one of the top 10 restaurants in the world by the International Herald Tribune. It also received Gourmet’s Top Table Award, a four-star rating from the New York Times and two Michelin stars. DANIEL has also been inducted into Culinary Hall of Fame and is an annual fixture on Restaurant Magazine’s World’s 50 Best Restaurants. Beyond Manhattan, chef Boulud has opened restaurants in Palm Beach, Miami, Las Vegas, Boston, and Washington D.C., as well as Singapore, London, and Montreal.

Watch the video to see how you can create the perfect omelet farcie, just like a classically-trained French chef.

A naturally gifted artist can create masterpieces, despite using primitive tools. For the many who will never receive accolades as a Michelin chef, the expertly designed Samsung Chef Collection makes feeling like one a little bit easier.

Collaborating with chefs among the best in the world, gave Samsung insights into practical ways to improve kitchen appliances. The result is the four-piece premium kitchen appliance set, which includes the four-door refrigerator with Precise Chef Cooling™, Flex Duo™ oven range, over-the-range microwave-hood, and WaterWall™ dishwasher.

Chef Boulud changes his menus based on seasonal ingredients, and that means keeping them as fresh as possible. The Chef Collection Refrigerator has Precise Chef Cooling™ with minimal temperature fluctuation within the range of 0.9 degrees Fahrenheit (or 0.5 degrees Celsius) to ensure freshness. It includes two different sections that cool at different temperatures for the crispest produce and the juiciest meats, fish and poultry. Also included is a 3-in-1 Chef Pan that marinates, cooks and cleans. 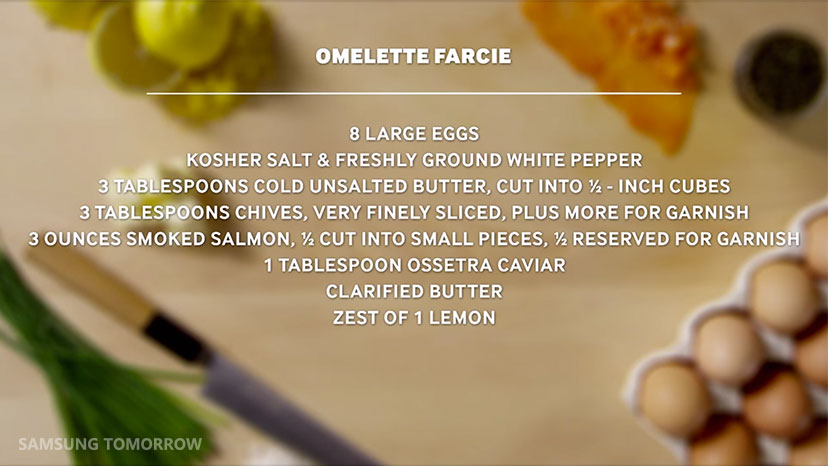 First, prepare eggs in two separate bowls, five eggs for the outer omelet shell and three eggs for the scrambled egg stuffing. Season the omelet shell with salt and pepper. Using the Chef Collection range, set up a double boiler to make a scrambled egg stuffing. Sprinkle in the lemon zest and chopped chives while whisking. Set the egg scramble aside. Melt butter in a pan and add the omelet mixture. Chef Boulud’s tip for the best omelet is to stir the eggs until they begin to curdle, then let the omelet set. Once the omelet begins to set, add the chopped salmon. Spoon in the scrambled egg filling on one half of the omelet. Save a spoonful for plating. Using a rubber spatula, begin to fold one side of the omelet to the center. After folding one half, holding the handle of the pan, tap the pan at the handle with a fist to let the omelet roll to the other edge. Close the omelet using the rubber spatula.

Slide the omelet from the pan to a plate. Slice a small opening in the center of the top side, filling with the remaining scrambled eggs. Top with caviar. Garnish with remaining sliced salmon and sprigs of chives.