In this three-part video series, three members of Samsung’s Club des Chefs share their take on an everyday dish, the omelet. Club des Chefs is a team of Michelin-starred culinary visionaries from around the globe who contribute insights and expertise to help Samsung revolutionize kitchen appliances. This series features Club des Chefs founding members, chefs Christopher Kostow and Michel Troisgros, and world-renowned chef Daniel Boulud. Each chef will update a classic dish and show how these masterful interpretations are easy to recreate using the Chef Collection series of kitchen appliances from Samsung. In episode one, chef Christopher Kostow created his steamed omelet. Episode two featured chef Daniel Boulud’s omelet farcie, and in episode three, chef Michel Troisgros shares his parmesan soufflé omelet recipe. Tune in to each episode to see how the Chef Collection Series of kitchen appliances makes culinary excellence possible for everyone. 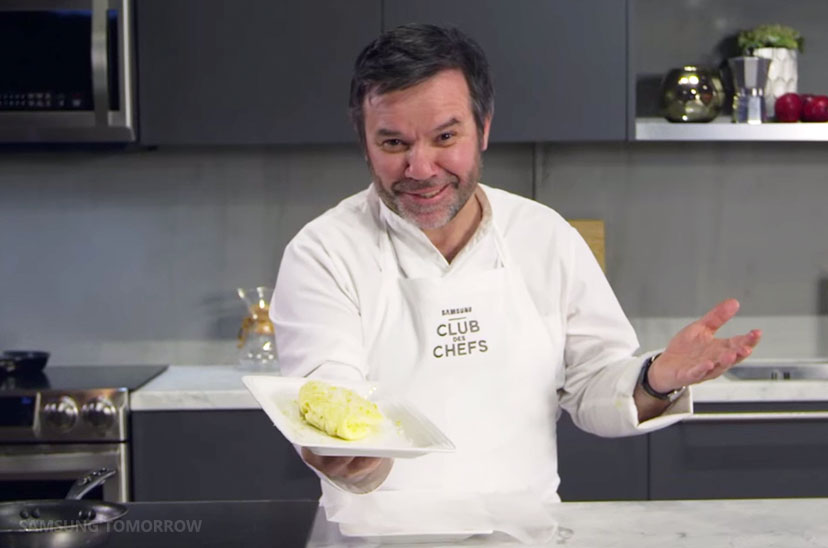 In the last of three video tutorials, chef Michel Troisgros presents his Parmesan Soufflé Omelet, a modernized version of a traditional French meal. Chef Troisgros says the recipe is a family tradition because it is so light and elegant. A soufflé is a French word, which loosely means “puffed up.” It is a lightly baked cake of beaten egg whites mixed with custard. A properly prepared soufflé is light and fluffy. Chef Troisgros adds a special twist to the typical omelet by baking it, giving it a really pleasant texture. Samsung makes it easy with the Chef Collection kitchen appliances.

Chef Michel Troisgros comes from a lineage of culinary masters who have been significant to French cuisine for three generations. He now owns and operates the family business in Roanne. He has traveled the world to learn from master chefs in Paris, London, San Francisco, Tokyo, New York and Brussels. Together with his wife, he reinvented his family’s restaurant, La Maison Troisgros, to a cordial and modern environment of purified design, evoking modernity, Zen, elegance and refinement. The restaurant has been awarded three Michelin stars since 1968. In addition, La Maison Troisgros is rated the Best French Restaurant in the World by Gault Millau. The Troisgros family of restaurants also include three other restaurants in France, one in Moscow and one in Tokyo.

Troisgros remains true to simple but sophisticated flavors. He achieves his dishes using as few ingredients as possible, never using more than five or six per dish. He upholds the traditions of French cooking, while incorporating new styles learned from this worldwide travel.

Watch the video to see how you can create the perfect omelet soufflé.

A naturally gifted artist can create masterpieces, despite using primitive tools. For the many who will never receive accolades as a Michelin chef, the expertly designed Samsung Chef Collection makes feeling like one a little bit easier.

Collaborating with chefs who are among the best in the world gave Samsung insights into practical ways to improve kitchen appliances. The result is the four-piece premium kitchen appliance set, which includes the four-door refrigerator with Precise Chef Cooling™, Flex Duo™ oven range, over-the-range microwave-hood, and WaterWall™ dishwasher.

Chef Troisgros emphasizes the importance of using the freshest eggs. The Chef Collection refrigerator has Precise Chef Cooling™ with minimal temperature fluctuation within the range of 0.9 degrees Fahrenheit (or 0.5 degrees Celsius) to ensure freshness. It includes two different sections that cool at different temperatures for the crispest produce and the juiciest meats, fish and poultry. Also included is a 3-in-1 Chef Pan that marinates, cooks and cleans. 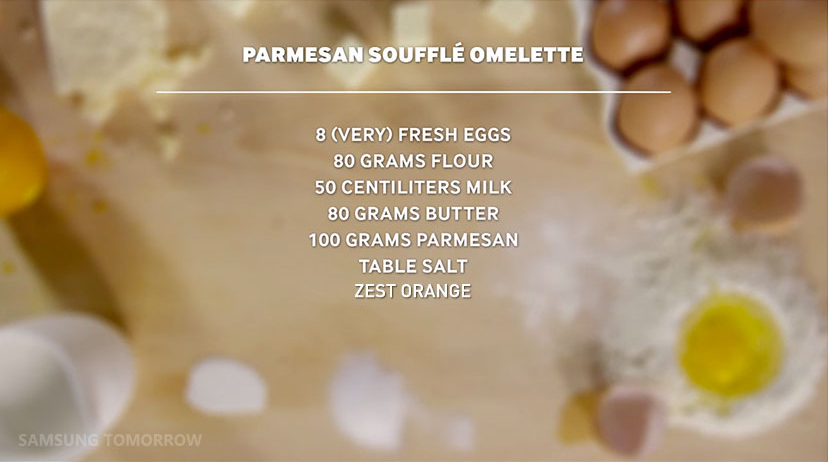 First, prepare eggs by separating whites and yolks. In a pot, bring milk and 60g of butter to a boil. In a large bowl, whisk eight egg yolks with 60g of flour until the dough is still light but firm. Gradually add the boiling milk and butter, whisking into the dough. Bring back to heat and mix until it is thick like custard. Set aside. Next, whisk three egg whites until stiff. Mix in yolks with whites with a rubber spatula. Fold while using very wide gestures to add more air, keeping whites very firm.

Melt butter into a pan. Pour the omelet mix into the pan until edges begin to crisp. Put in the oven and bake for four minutes at 400F. Move omelet from pan to a piece of parchment paper. Grate Parmesan cheese. Gently fold omelet in half. Grate more Parmesan cheese and orange zest.

Place omelet and parchment paper on a plate. Place another plate face down on top of the first plate. Flip the plate over to transfer the omelet to the new plate without parchment paper. Finish by garnishing with more grated Parmesan.