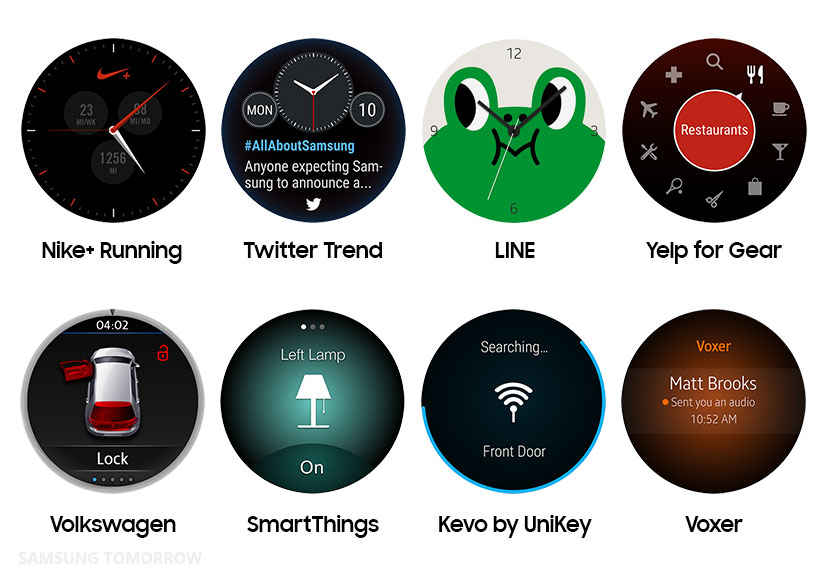 But a great device needs more than just design and technology. Partners and apps are vital aspects to creating a device that maximizes usability and functionality—and the Gear S2 has put together a strong list of partners that take it to the next level.

From early on, Samsung emphasized the importance of its partners, as seen in the early announcement of the Software Development Kit (SDK) for the Gear S2. Usually, an SDK is released after a new product announcement, but for the Gear S2, early access was provided back in April, months before the device was unveiled at IFA in Berlin in September.

“We made sure to put in as much time as needed to optimize the applications for the new circular design and UX,” said Joohyung Jeong of Product Planning Team of IT & Mobile Communications Business division. “We wanted to offer a great variety of useful applications to the users at the time of launch, which was made possible with the early announcement of the SDK.”

Because of the Gear S2’s unique, rotating bezel and a circular display, Samsung’s partners were eager to create apps for the smartwatch. The new wearable shape meant all the apps had to be redesigned, and Samsung provided all the design resources needed by our partners. But, in fact, optimizing apps for the rotating bezel turned out to be easier and more intuitive than the touch menus used by many wearables. It was also more convenient creating messaging services and notifications using the new interface.

The other thing which makes the Gear S2 so special is Samsung introduces special watch faces with many partners besides a customized app. These watch faces provide important information depending on your needs. You can check the latest trends on Twitter, or see stock updates on Bloomberg, or sports scores on ESPN.

With hundreds of apps available for the Gear S2 already, let’s take a look at eight of the most popular, for making people’s lives easier and more empowered.

With Nike + Running, you can keep track of your jogging regime, including how far you went, the pace and for how long you were running. Nike + Running can help organize and motivate you to make your fitness goals and live healthier.

Twitter comes to your wearable, bringing all the trending topics, fun tweets and conversations, and hottest news from around the world.

The popular and free messaging app Line is also available for the Gear S2. In addition to being fast and easy-to-use, Line comes with an array of cute cartoon characters you can use as the face for your Gear S2.

As a wearable device, the Gear S2 is designed for people on the go. And one of the most popular apps for people on the go is Yelp, the review site that rates just about everything in the world around you, like restaurants, flights, coffee shops, and stores.

Whether it’s called Car-Net (in the United States) or e-Remote (in Europe), the Volkswagen app gives you access to your car, no matter how close or far you may be. You can check to see if the doors are locked, start the air-conditioning before you get to your car or stop it from charging (if it’s an electric car).

SmartThings turns your home into an IoT Smart Home, and the SmartThings app lets you check on your home from wherever you are. Are your doors closed? Are the lights on? Do you want your home to get ready for your arrival, based on any preset routine you like? The SmartThings app can do all that and more.

Kevo is the smartlock security system that puts the safety of your home right onto your mobile devices. No more fumbling with keys, now your Gear S2 can lock and unlock your doors. Kevo can send eKeys to anyone else, family or guests, so your family is safe, and you have maximum control over your own home.

A messaging platform for sending voice messages, texts, photos, and videos. But what makes Voxer different is that you can also send audio live, like a walkie talkie, to instantly communicate with your friends and contacts.

And that’s just the start. Just as partners in Korea have prepared a special transportation app, with which users can simply tag their Gear S2 on the card readers at the gates of the subway and bus stations, many different specialized apps will be introduced to fit the needs of the local consumers.