Tizen: Here are the Talking Points

What happened on June 3 in San Francisco did not stay in San Francisco. The word is out about Samsung Z. A smartphone with 4.8” HD Super AMOLED and 2.3GHz Quad core, it is surely attractive, but that is only part of the picture. Also turning heads is the OS of the Samsung Z, Tizen. We understand that if you are not a developer or tech-savvy person, Tizen might be unexplored territory. So, to keep you in the loop, here are some of things to know about Tizen.

It is Open Source

What do Google, Facebook, Wikipedia, or 9 out of 10 data centers have in common? They are powered by open source software. In this ever-evolving industry, open platforms plays a significant role. For the past decade, these platforms have accelerated innovation and now it is hard to argue that the best software products are not based on open source, either entirely or partially. Considering there will be more than 50 billion connected devices by 2020, including watches, TVs, cameras, industrial and domestic automations and more, open platforms will continue to play a significant role. Tizen is the embodiment of open platforms and aims to create an ecosystem for these connected devices.

Samsung Z is not the first Tizen product 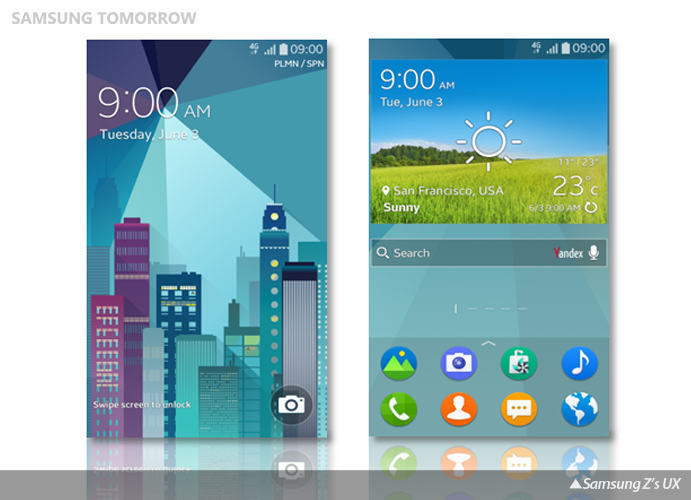 Yes, although Samsung Z made quite an impression, it definitely isn’t the first Tizen-powered product by Samsung. Technically, the first products that used the Tizen technology were cameras: NX300, NX2000, NX300M, and NX30 camera. Samsung has also been working on developing a Tizen ecosystem for the cameras.

Tizen plans to be the Operating System of Everything

So far, Tizen has released 3 profiles: mobile, wearables and In-Vehicle Infotainment (IVI). And, as we briefly went over, Tizen plans to add TV and Camera profiles. Moreover, it is planning to add a profile for Home Appliances as well. One thing non-developers can take from this is that the apps developed with Tizen will be able to run on all of these profiles, allowing for integration of devices! Start imagining an app that can control all these products, because it will happen, we should thank all the passionate developers around the world in advance.

As we mentioned, there is no doubt that developers are significant to the future of the industry, and thus to us consumers as well. Therefore, it is important that Tizen be easy and convenient for developers. We will not get too deep about the specific technologies of it, because if we do, we then have to talk about Blink, awesome HTML5/W3C standard support, simplified architecture, crosswalk, graphics/rending/parallelism, and other developer semi-exclusive jargon.

Basically, Tizen gives one of the highest levels of support to developers in terms of tools. Tizen also updates the most recent version of the tools frequently and makes it much more time-efficient for developers to program. For example, Unity3D, one of the most powerful engines for game developers, collaborated with Tizen to develop the Unity-Tizen tool so they can port existing games to Tizen quickly and with ease.

There are plenty of paths to monetization and opportunities for developers, which are great incentives for developers to develop more high quality apps. Moreover, for the Tizen apps sold on the Tizen store, 100% of the revenue goes to the developer for the first year (excluding tax and carrier billing fees). ‘

If you want to get to know more about Tizen, visit its official website, https://www.tizen.org/. The website is available in seven different languages where you can find plenty of insight into Tizen. For example, did you know the name ‘Tizen’ is a portmanteau of the connectivity of “Tie,” the activity “Rise,” and the meditative qualities of “Zen?” An ambitious name for an ambitious open source platform.