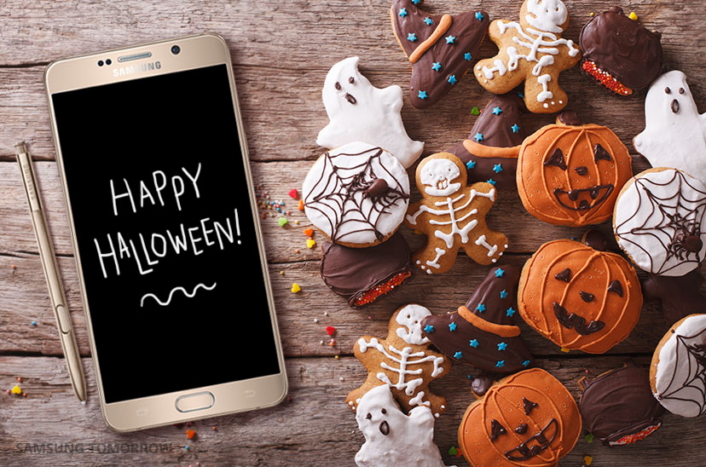 Halloween is nearly upon us, that spooky fall time for dressing up in crazy costumes, carving pumpkins and celebrating ghosts, witches and all the creepy creatures of the night. One of the most popular activities is trick or treating, what kids go door-to-door collecting tasty treats from their neighbors.

With that tradition in mind, here is a collection of tricks and treats for your Samsung mobile devices that you might find … bewitching.

Trick: A screen that’s on, even when it’s off

From the moment you eject the S Pen from the Galaxy Note5, you know you’re getting a totally different mobile experience. The S Pen is more versatile and useful than ever, with a truly natural writing feel and an array of fun, smart features, like Action Memo, Smart Select and Screen Write. Air View even lets you preview content without touching the screen, just by hovering the S Pen above the display. But one of the most useful new features on the Galaxy Note5 is the ability to write notes on the screen even when the screen has not been turned on. Screen Off Memo fires up automatically whenever you deploy the S Pen and the screen is off, giving you the ability to write directly on the darkened display and then save your message. It’s a ghostly good trick.

The defining aspect of the Galaxy Note5 is its S Pen, which gives users unprecedented functionality and control over their content. Popping the S Pen out from the phone automatically brings up the Air Command menu, where you can take a memo, select images or write right on the screen. But you can also change up to three of the Air Command slots, choosing the apps that are just right for you. Your favorite web browser, a calculator, navigator or whatever you use the most and want right at your fingertips. It’s a treat that will have you howling at the moon.

People love the 5.7-inch Super AMOLED screens of the Galaxy S6 edge+ and Galaxy Note5, both of which are bright and big, great for using all sorts of media. But sometimes that much screen space can be too much, which is why they also offer a reduced screen mode. Just tap the Home button three times quickly, and the entire screen shrinks down to a smaller size. You can even choose whether you want that screen to be on the left side or the right side of the phone. It’s a fiendishly useful trick.

Sometimes you need to stay on top of some breaking news or information—the latest headlines, sports scores, or financial information—but you are in a meeting or other event and don’t want to be conspicuous about checking. Fortunately, the Galaxy S6 edge+ has Information stream, which allows you to keep updates along the phone’s signature curved edge, without turning on the main screen. Select different feeds and get instant news, whatever you like, then the edge will light up with your stream, while the main screen stays dark as night.

The Gear S2 has a powerful battery than can last a couple of days on a single charge (depending on how you use it, of course). But sometimes you can get caught without a charges and with power running low. Which is why the Gear S2 offers a Power saving mode, to help your device last a while longer. Just choose the Settings function and scroll down the Power saving. The Gear S2 will switch to greyscale home screen and disable most special functions. That way, if you use a lot of apps during the day, it won’t come back to haunt you.

The Gear S2 is a great looking, stylish wearable, but with health-related apps like S Health, it can also help you take care of yourself. With S Health, the Gear S2 automatically tracks activity—or inactivity. Anytime you’re moving around, the Gear S2 knows it and sends encouraging messages. Or if you are sitting still at your desk for too long, it will suggest maybe it’s time to stand up, stretch your bones and get the blood pumping.