Capable of capturing stunning HDR landscapes and low-light portraits, smartphone cameras have reached a point where they can produce pro-grade photos. Today’s smartphone cameras combine multiple lenses with cutting-edge technologies, such as artificial intelligence, to deliver stunning images. Samsung’s ISOCELL image sensors are at the core of these camera innovations, enabling users to capture their every precious moment with top-of-the-line image quality.

Samsung’s latest image sensor, the ISOCELL GN1, is a powerful 50-megapixel sensor with 1.2μm pixels. As Samsung’s first image sensor to feature both Tetrapixel* and Dual Pixel technologies, the ISOCELL GN1 has been designed to help users take near-professional grade quality images in any environment with ultra-fast autofocusing comparable to that of DSLR cameras.

The video below introduces how the ISOCELL GN1 takes smartphone photography to the next level with its rapid autofocus, high-resolution detailing, and vivid colors capture – even in low-light conditions.

The speed at which a camera can focus on its subject can hugely influence a user’s photo-taking experience. Whether the subject is a furry friend up close or a group shot of a family, fast autofocus can help ensure you never miss a precious moment. In order to provide users with an ultra-fast autofocus experience, the ISOCELL GN1 leverage Dual Pixel technology with 100 million phase detection focus units.

Each pixel on the ISOCELL GN1 consists of two photodiodes, which receive light rays from sides of the micro-lens on top of the pixel. The phase detection autofocus process then creates two ‘copies’ of the image from incoming light, one on each photodiode, which are assessed by the sensor just as human eyes work. The lens elements then adjust until the two images are identical, indicating that the object is in perfect focus in the camera’s view.

Pixels capture light and turn it into data. They come in a range of different sizes, which in turn will affect the resolution of an image sensor. Sensors with smaller allow for ultra-high-resolution images with tack-sharp details, while bigger pixels will receive more light and result in improved light sensitivity for shots taken in low-light conditions.

To allow manufactures and consumers a wider choice of pixel sizes – from big to microfine – Samsung has developed a variety of cutting-edge technologies to enhance both detailing and light sensitivity to match any need. The ISOCELL GN1 boasts 1.2μm pixels, almost twice as large as the 0.8μm small pixels featured on other high-resolution sensors, so that users can capture stunning, high-quality photos, even at nighttime.

The sensor also features ISOCELL Plus, Samsung’s innovative pixel isolation technology which uses a physical barrier to isolate pixels, allowing more light to be gathered by the micro-lens and then absorbed by the pixel’s photodiodes. The result is higher color fidelity and improved light sensitivity so users can enjoy bright, color-accurate images in every photo they take.

Have you ever taken a photo at night only for it to turn out too dark and blurry or overly grainy? Shooting in low light presents the user with a number of technical hurdles, but thanks to the inclusion of Samsung’s Tetrapixel technology, the ISOCELL GN1 is capable of capturing crystal clear photos in any lighting condition.

Unlike conventional RGB sensors, where pixels with different color filters are arranged in a mosaic pattern, Samsung’s Tetrapixel sensors arrange pixels with the same color filter right next to each other in groups of four. When shooting in low-light conditions, the sensor can treat those groups of four pixels as one big pixel, meaning that more light is let into the sensor for images that are brighter and feature less noise. Given that the ISOCELL GN1 features larger pixels than other sensors, the addition of Tetrapixel provides an even greater image quality boost for shooting in low-light conditions, while in bright lighting conditions the sensor uses a re-mosaic algorithm to rearrange the pixels into a conventional RGB pattern for higher-resolution images.

In mixed lighting conditions, such as with a low-lit subject against a bright background, it can be difficult for photographers to get the right dynamic range so that both light and dark areas of the image get proper exposure. Conventional HDR technology used to solve this problem by taking multiple images and stacking them together in post-processing to get wider dynamic range in the final image. This same principle underlies the Real-time HDR of the ISOCELL GN1.

Rather than taking sequential photos and stacking them together, the ISOCELL GN1 leverages Tetrapixel technology to deliver better colors and improved detail in shadows, mid-tones, and highlights. 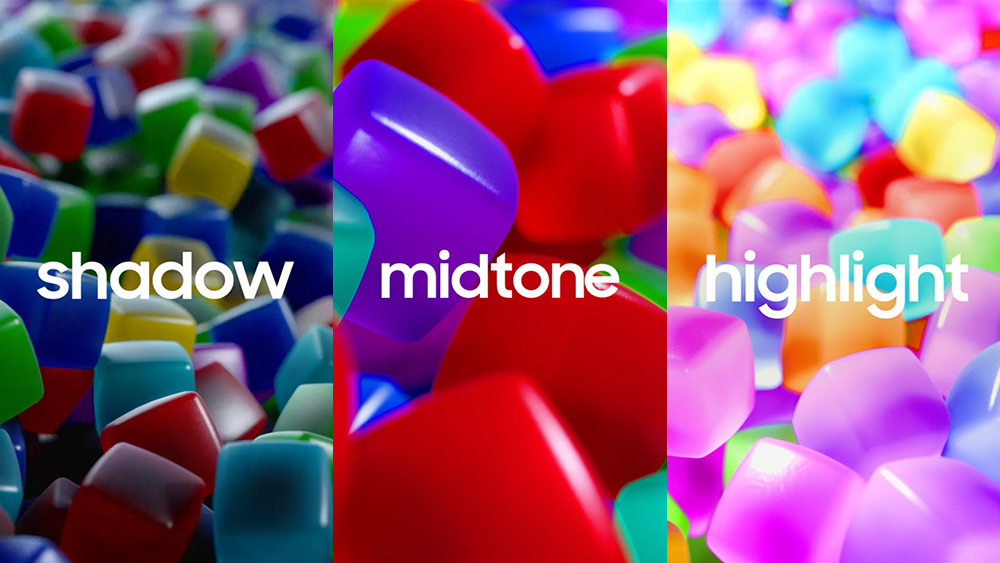 Each pixel in a group of four takes the picture at different exposure times: two pixels take medium exposures, one takes a long exposure, and one takes a short exposure. This allows the sensor to capture light from the scene in front of it with greater precision. The ISOCELL GN1 combines the information from these three exposure levels to produce an HDR image in a single shot in which the user is able to preview immediately.

Letting in Just the Right Amount of Light

Native ISO determines how sensitive an image sensor is to light and is determined by the conversion gain value. This value affects the full well capacity, or how much light the photodiodes can receive, and the noise level. Incorporating a fixed, native ISO into an image sensor limits its ability to adapt to changing light environments.

The ISOCELL GN1 features an additional low native ISO able to accurately respond to bright environments, and its Smart-ISO technology selects the ideal conversion gain value for each lighting situation. The result is optimal dynamic range and reduced noise across all kinds of shooting conditions.

While shooting portraits at the beach on a sunny day, for example, it will choose the low native ISO to increase full well capacity and extending the dynamic range for bright sections of the scene. If the camera were using a high native ISO in these situations, the signal would be over-amplified, blowing out the bright sections and leaving little to no detail in those areas of the image.

Conversely, when taking selfies with friends at a late-night party, Smart-ISO technology will choose the higher native ISO to produce optimal brightness with less noise and capture more dynamic range in dark sections of the scene, bringing out every detail even in the shadowy areas of your image.

Pro-Grade Photography in the Palm of Your Hand

The ISOCELL GN1 packs a lot of technology into a small sensor. As Samsung’s first image sensor to feature both Dual Pixel and Tetrapixel technology, it equips your smartphone camera with the power to adapt to any environment so that you can capture great photos no matter what lighting condition you are in. With this versatility, you can enjoy a full suite of pro-grade photography tools right from your smartphone.

* Technological term of “Tetrapixel” was updated in July 2022.