Samsung Electronics Vietnam has more than 100,000 employees working across its manufacturing facilities. As female workers account for nearly 75% of the total workforce, Samsung has made concerted effort, in close partnership with the employee work council, to ensure comfortable working conditions as well as unique benefits for all its staff.

On November 21, Báo Lao Động also interviewed several female employees at Samsung Electronics Vietnam for story looking into the positive working conditions and employee satisfaction at the company. For its part, Báo Lao Động is a representative general daily newspaper published by the Vietnam General Confederation of Labor, and one of the most influential and oldest newspapers in Vietnam. 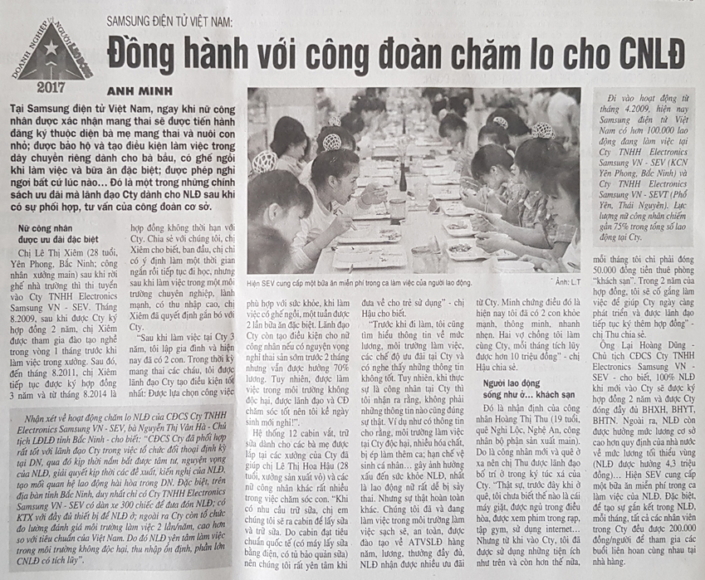 The following is a full translation of the article:

When female employees of Samsung Electronics Vietnam become pregnant, they can immediately apply for pregnancy and nursing support. Samsung re-assigns work and provides special chairs designed for pregnant women during their work and meal hours. The employees are also allowed to take leave or visit company clinics as they require. This is a welfare policy that the local Employee Work Council has established in consultation with the company.

Xiêm, who joined Samsung in August 2009 on a two-year contract, was also offered vocational training for one month before working in the factory. In August 2011, Xiêm signed a three-year extension, and from August 2014 has been on long-term contract with the company.

Initially, Xiêm was planning to return to school after working at Samsung for a short time, but has decided to stay with the company given the satisfactory income and professional and healthy work environment.

“Since working at Samsung for the past three years, I’ve gotten married and now have two children. During both my pregnancies, the company provided a good environment for me. I was able to choose a job role suited for my health condition at the time and provided access to special meals for pregnant mothers,” explains Xiêm. “I was able to go on maternity leave for two months prior to giving birth, and 70% of my salary was provided while I was on leave. The working environment was safe, and the company and work council treated me well, as if I were the baby.”

“When we have to nurse a baby, we use the breast pump to collect breast milk. The quality is of international standard (with electric pump and milk storage) so I feel safe in nursing my child,” said Hậu.

“Before I started working, I researched Samsung’s welfare system and salary and actually heard some bad rumors. However, when I joined Samsung as an employee, the bad rumors did not turn out to be true. For example, some rumors said Samsung’s work environment is harmful, that there is forced overtime, and problems with personal hygiene that negatively impact the health of employees, particularly causing pregnant employees to lose their babies.”

“But the truth was different. The work environment is clean, and every year the workers receive hygiene and safety education. The salary and bonuses are sufficient, and the workers receive a lot of welfare benefits. This I can prove by my two children, who are smart and healthy. My husband and I, by working for the company save more than 10 million dong every month.”

This is the story of Hoàng Thị Thu (a worker at the main line, from Nghi Lộc, Nghệ An, age 19).

The company provided Thu accommodations in the Samsung dormitory as Thu is new and her hometown is far away in a rural part of Vietnam.

“Back home, I actually had never experienced a washing machine, or air conditioner. Nor have I watched movies in a cinema or used the gym or had access to the internet. After working for Samsung and living in the company dormitory, I have not only used washing machines and the internet, but so much more. I hope to continue working for Samsung for a longtime,” said Thu. “Living in the dormitory is like living in a hotel with 50 thousand dong. I have a two-year contract, but I hope to contribute to the company and extend my contract time.”

“When entering the company, 100% of our employees receive a two-year contract, as well as full benefits including social security, health, and unemployment insurance. In addition, employees are entitled to a higher salary level than the state regulations on minimum wage, as well as other incentives like free meals during their work shifts. We also organize regular employee outings and activities,” said Lại Hoàng Dũng, Chairman of the Employee Work Council at Samsung Electronics Vietnam.

Nguyen Thi Van Ha, Chairman of the Labor Confederation of Bacoye Ninh Province, said, “The council cooperates very well with the leaders of Samsung Vietnam through regular dialogue which provides close insight into the sentiment and aspirations of employees. The cooperation also seeks to promptly resolve, and address matters brought up by employees which has contributed to creating harmonious labor relations.”

He added, “Samsung is the only company that utilizes 300 shuttle buses for employees to commute. Samsung also opens negotiations twice a year, and the average salary standard is higher than for Vietnam. Samsung employees work with comfort in a safe environment with stable income. The Employee Work Council has greatly contributed to this.”

In operation since April 2009, Samsung Electronics Vietnam has more than 100,000 employees working across its manufacturing facilities in the Yen Phong Industrial Zone in Bac Ninh Province (SEV) and Pho Yen District in Thai Nguyen Province (SEVT). Among the employees, female workers account for nearly 75% of the total workforce.