What Samsung Booth at IFA 2014 tells you about its future

On IFA 2014’s official website, the organization urges you not to miss ‘the opportunity to explore emerging trends and celebrate the premieres of new technologies and products.” Naturally, if you check out what is being showcased at the Samsung booth at IFA 2014, you can get a solid idea of what direction Samsung wants to take in the near future.

Where Samsungs wants to be by 2020

First, it must be pointed out that Samsung set a very specific quantitative goal 5 years ago. According to Samsung’s sustainability report 2014, by 2020, Samsung plans to achieve $400 billion in sales and become No.1 in the global IT industry and until 2020; officially that is Samsung’s end game.

Cards are on the table… or booth 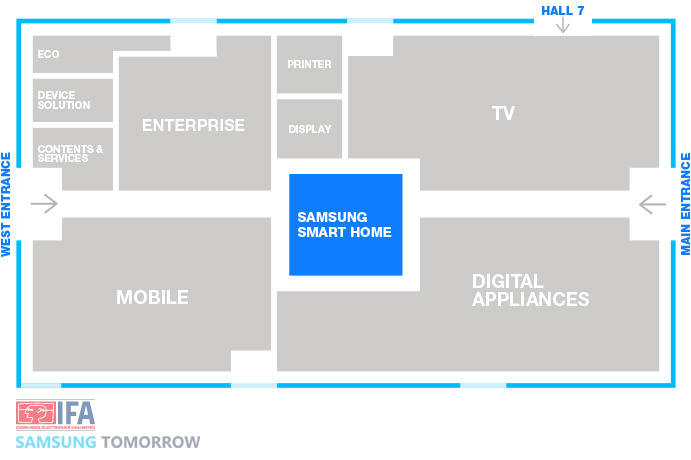 Samsung is once again showing its cards at the IFA 2014 through its booths – mobile & wearable devices, TVs, printing solutions and digital appliances. However, if you take a look at the layout of the Samsung booth at IFA 2014, you notice that they put two more cards on the table: Smart Home and B2B solutions.

Although Smart Home and B2B solutions have made frequent appearances in international events such as CES and IFA, they have never been emphasized like this year at IFA. For example, the Smart Home booth is located right in the middle metaphorized as a hub of all the sections in the Samsung booth, and B2B solutions booth is probably the biggest ever at CES or IFA.

The Biggest Transformation will happen at home

That was a direct quote by BK Yoon from the Samsung Keynote speech at IFA 2014. Samsung locating the Smart Home booth is also definitely a statement. This really isn’t a surprise for many since Samsung has recently been very active in the Internet of Things area. In July, Thread Group announced (and we also announced) that Samsung and 5 other companies established the Open Interconnect Consortium (OIC) with the goal of defining the idea that connectivity requirements should connect not just devices but also networks and services through a common communications framework and IoT platform. Then a month later, Samsung made an agreement to acquire SmartThings, creator of the leading open platform for the Internet of Things.

Smart Home is not only a service that represents the beginning of the IoT era. As you can see from the Smart Home booth at IFA 2014, it connects smartphones, wearables, TVs, refrigerators, washing machines, vacuum cleaners, dishwashers, lighting and printers. It can be said that Smart Home is practically connecting personal devices, home appliances and business devices. Therefore, saying that Smart Home represents the beginning of the real IoT era really isn’t a far stretch.

Of course, B2B having it biggest moment at IFA 2014 could be a coincidence rather than a statement, but less likely. Samsung has made it clear in the past that Samsung will focus on the B2B market as they elevated the Global Business-to-Business (B2B) Center to a quasi-business division. Samsung has been expanding products and solutions related to the public sector, education and health-care through various partnerships. And it is showing its commitment through the B2B booth at IFA in Berlin. To quote BC Cho, Head of Global Enterprise Business Team, Samsung Electronics, “It’s because the world has changed.” And it is the “Second Phase of the Consumerization of IT.”

Samsung B2B booth consists of 6 parts: Retail, Hospitality, Finance, Healthcare, Transportation, and Education Solution. Through this design, you can see that Samsung is projecting its confidence as an end-to-end solution provider. Each booth insinuates that through hardware, such as LFDs and mobile devices, Samsung provides the right tools and through software, such as Digital Signage and KNOX, Samsung can bring integration, simplicity, and security in various industries.

We at Samsung Tomorrow just wanted to give you a big picture of the message Samsung want to deliver by skimming through the layout of the Samsung booth at IFA 2014. As you know, there are more specific things to talk about such as wearables. As IFA 2014 continues through the 10th of September here in Berlin, Samsung Tomorrow plans to bring you more details and exclusives on what is going on in the Samsung booth at IFA, including the B2B, Smart Home, mobile, TV, digital appliances and more. There are more than plenty of next gen Samsung products that you will be interested. Stay tuned and thanks for reading!