We find ourselves in an era in which anyone can watch any program at anytime from anywhere. But it wasn’t long ago when the television was a medium through which only several broadcasters transmitted programs that viewers watched according to a preset schedule.

The shift in people’s viewing habits arguably came when the TV became equipped with Internet capabilities. Viewers no longer needed to wait for the programming; they could play it instantly at their convenience.

In fact, the Internet streaming service Netflix dominated the North American networks and accounted for nearly 35 percent of downstream traffic in the peak evening hours (6 p.m. to 10 p.m.) in November 2014, according to a report released by market research company Sandvine.

Today, televisions continue to become more advanced, and as a pioneer in the global Smart TV sector, we at Samsung Electronics continue to advance our Smart TV offering and build an intelligent, integrated system that allows people intuitive access, more content choices and a more integrated entertainment experience.

A groundbreaking step toward such an intelligent, integrated system is our operating system Tizen, which—as announced earlier this year at 2015 CES—powers all of our Smart TVs, including the SUHD TV. 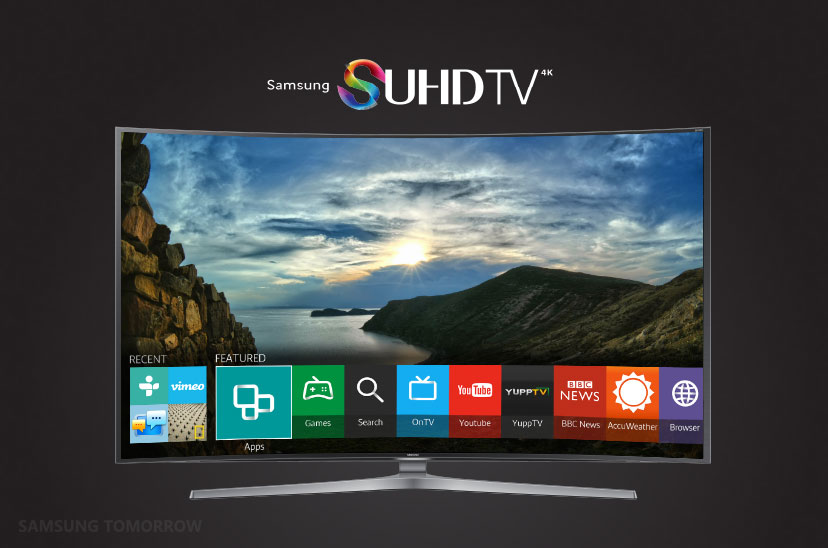 The 2015 Samsung Smart TV with Tizen boasts fast performance and better connectivity. The Smart TV can automatically recognize that your smartphone is used to watch movies on the go, and with the press of the ‘Quick Connect’ button, you can enjoy the same video on a larger TV screen from where you left off. It’s also very easy to transmit videos from the TV to smartphones.

Additionally, the Smart TV’s ‘Briefing on TV’ feature syncs with Samsung mobile devices to turn on and display important items when you wake up in the morning, such as the time, weather and your schedule.

Tizen can also be installed on home appliances such as refrigerators, washing machines, air conditioners and robot vacuums. In the age of the Internet of Things where countless devices will be connected to each other, Tizen will make the TV in your living room a control center for your devices.
For developers, it is now easier to develop new applications for Tizen, as the platform is open-source and supports the web standard for TV app development. This is well evidenced by the significant increase in the number of new applications and games that became available on the 2015 Samsung Smart TV, compared to 2014.

Tizen also allows Samsung Smart TVs to become part of a much larger content ecosystem, allowing easy collaboration with a number of partners for ultimate flexibility and unparalleled access.

For example, With PlayStation Now, Samsung Smart TV users can choose from hundreds of console games available in the PS3 library. And the popular dance game Just Dance Now, developed in partnership with Ubisoft is available globally on Samsung Smart TVs.

On many levels, Tizen is a sophisticated operating system that offers efficiency, usability and scalability. By continuing to build this intelligent, integrated operating system, we will undoubtedly deliver an enhanced entertainment experience to all Samsung Smart TV users.