For the past week, we focused on developers and software development kits (SDK), mainly because of the upcoming Samsung Developers Conference in San Francisco on the 28th-29th of October.  It is the first annual conference for developers in the U.S. where they get the opportunity to network with fellow developers and industry leaders, as well as the exclusive first look at the latest tools, SDKs, and platforms in the U.S.

‘The exclusive first look’ is not an overstatement. Samsung SDKs, especially Samsung Mobile SDK and Smart TV SDK, although they are already widely used, are pretty new. As a prequel to the Samsung Developers Conference, which you can also sign up at the conference, we met up with the developers behind the Samsung Mobile SDK (J. Seo, Vice President, Service R&D Team, Mobile Communication, Samsung Electronics) and Smart TV SDK (KwangKee, Lee, Senior Vice President, Service Platform, Visual Display, Samsung Electronics) to talk about the state of SDKs and apps. 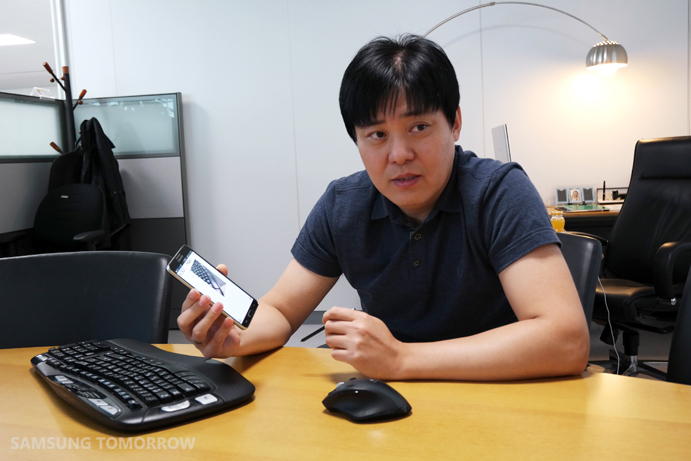 To stay competitive we need to differentiate products, but, differentiating software is challenging. Because Android is, by far, the most dominant open source platform and many of our competitors use Android, Jelly Bean or Kit Kat, just like us. However, we always have been differentiating our software. One of the ways we wanted to achieve this was to develop Samsung specialized apps. These apps will differentiate our software, and as a result the product as a whole.

When a new Samsung mobile device is being developed, we put a great deal of time and effort into developing superior apps that would make people’s lives better, such as S Note (in Note Products). Realistically, it is difficult to make a high quantity of high quality apps like S Note, just by ourselves. This means that there is plenty of potential for good apps to fill the void. Currently, many developers use Android, but it is very complicated and exhausting to develop an app like S Note with just Android. Therefore, we decided to come up with a way that any individual developer can make apps like S note, and we created Samsung Mobile SDK. 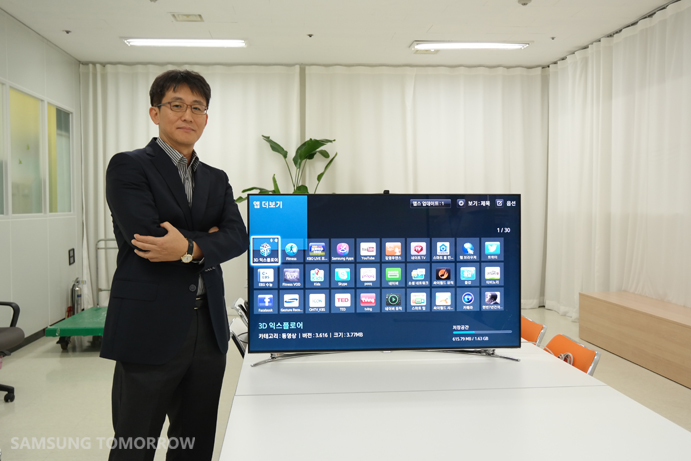 Smart TV SDK as a concept is not significantly different from Samsung Mobile SDK. Mobile device users need mobile apps, but realistically, Samsung cannot provide all the apps users want or need. Therefore, Samsung decided to create a platform for third party developers to develop a variety of great apps and services; to make an active ecosystem for the developers.

The difference between Mobile SDK and Smart TV SDK is, obviously, the environment, especially in terms of content. For example, TV contents include VOD services and live streaming, which are more specialized for TVs. As a result, Netflix and Youtube are a few of the most popular apps right now. All these apps are developed with Samsung Smart TV SDK and we have about 3000 apps available globally.

We wanted to provide developers a tool to develop apps utilizing the characteristics of TV. Currently, many broadcast or VOD companies are working with us to provide quality content for TV apps, such as high definition streaming services.

There are about 10 components to Samsung Mobile SDK, and you can divide those into two groups. One is the kind of SDK that enables features that are specialized for Samsung mobile devices, such as MultiWindow or S Pen. The other group of SDK enhances and makes it easy to use some features that works on many other devices, such as network functions. For example, Samsung Chord provides service by connecting devices via p2p. So, you can make an app for any device that has network service with Samsung Chord. So the strength of Samsung Mobile SDK is that it has specialized SDKs for Samsung exclusive features like S Pen. And, obviously, you can make apps for whichever Android run mobile devices you want as well. 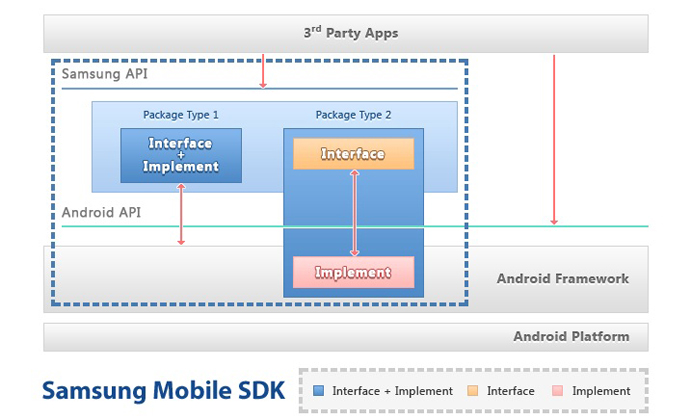 There is plenty of potential in Smart TV apps. Nowadays, when people purchase a mobile phone, their primary concern is if their favorite app runs well on it. In some ways, for mobile devices, apps define a product. I think we just don’t have that yet for Smart TVs, which means any third Party developers can be a part of this process and lead the trend.

Until recently, TVs have been a one-way communication device where viewer participation has been limited. Since the introduction of the Smart TV, the distribution channel for content has been diversified. For example, contents for TVs were only available ‘on-air’, but now we can view contents via internet, PC or USB.

The industry recognized this pattern quite a while ago. As a sign, there actually have been many strategic activities among broadcast companies, internet channels and VOD companies to provide high quality content. Taking advantage of these activities, we have taken various approaches to provide TV users more options to enjoy more diverse high quality content. We do recognize that the most popular way of consuming the content, thus far, is viewing. However, we are not afraid to take a shot at changing conventional ways and, obviously, we want third party developers to join us.

The Role and Potential of Third Party Developers

Mobile devices have become multi-formed. Currently, we have S Voice feature, and Android has Google voice feature. I think more diverse kinds of input will come in the future, it is inevitable. Samsung Mobile SDK supports many of this input features, such as S Pen and gestures.

As more people get used to Samsung Mobile SDK’s various features, we believe that people will come up with great ideas that we never could have thought of. We hope that people develop that idea into a great app. I think it is very realistic to expect more of that to come, very soon. The great thing about Samsung Mobile SDK is that it makes it so easy to develop an app that you don’t really need to be an expert in a specific field to develop a great app for specific business or people. Because of its compatibility and usability, Samsung Mobile SDK has tons of potential.

People are used to watching TV lying down or sitting down on the couch. However, we think that is just one way to view a TV; meaning there are many other ways to communicate with the TV. We want to bring more experience to people and TVs. I think this is where third party developers can be effective. There are so many creative people out there who can make changes to the conventional life style. We encourage developers to do this with the Smart TV SDK. 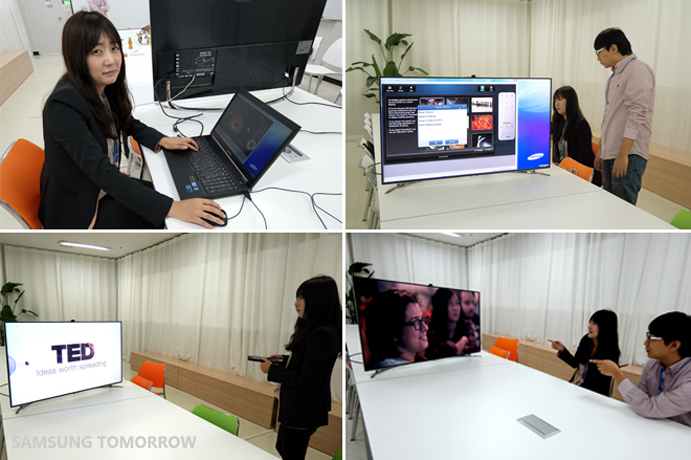 The future of TVs is redefining what TV is by providing various ways to interact with it. Considering the fact that people can watch videos on mobiles, PCs or tablets, it is very necessary and inevitable. Third party developers are the future of TVs.

In reality, TV apps are relatively less developed than mobile apps, therefore there is so much potential for TV apps because many aspects of Smart TV haven’t been explored yet. For example, there is no killer content for TV apps yet, meaning any app has the potential to shape the TV app market. With the Smart TV SDK, there are plenty of chances for developers to make a name for themselves.

Tips for the Developers

Therefore, we combined and organized all the functions and features together to make it easy on the developers. For instance, if you want to develop an app using the S Pen function, you will download the Samsung Mobile SDK, because you can save a significant amount of time. However, since you’ve already downloaded the Samsung Mobile SDK, you can use other features, such as MultiWindow, very easily. 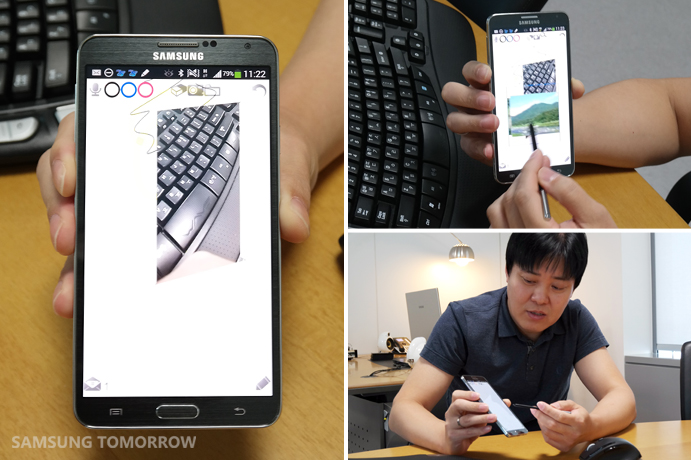 When developers are utilizing Samsung Mobile SDK, they should realize that they can do so many things with it; and maybe they can discover new features that we never could have thought of, as well. Plus you can also develop an app very quickly.

Smart TVs have many advanced features and we are also releasing a new Smart TV SDK which supports those various advanced features. We strongly encourage developers to take advantage of the new features with the new SDK.

For example, we can think of an app called ‘Smart home’, which allows users to manage, control and monitor home appliances from their TV. Now many home appliances are smart; refrigerators, washing machine and robot vacuum cleaners. They have features that allow us to communicate with them remotely. TV can be a hub where you can see the activities of your smart devices. 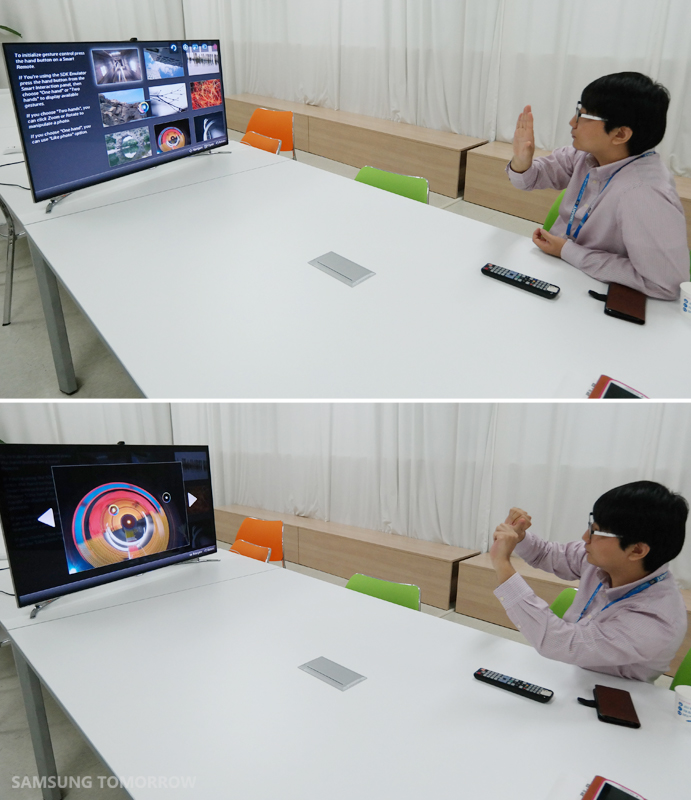 On the next version of the SDK, which will be released very soon, we improved the features and its compatibility; and it will continuously be updated. Currently, many of our latest TVs support gesture and voice recognition, but there are not many apps that utilize these features. Smart TV SDK let third party developers easily develop an app that utilizes those features.

The time when product is defined by its producer is long gone. Android run phones are dominant, because of all the individuals who support the system. It is because the third party app developers are supporting the ecosystem. Decades ago, phones were about ‘how well it receives phone calls”, but a couple of years ago when smartphones were introduced, it was about the ‘Wi-Fi’ ability, and until recently, it was about its functionality. However, now it’s about how well it runs your favorite app.

As technology evolves, apps need to evolve as well. It is the evolution of the ecosystem that enables the evolution of apps; and, of course, the hardware needs to back it up. Most importantly, it is about the third party effort of making diverse kinds of apps. Samsung Mobile SDK achieves this. 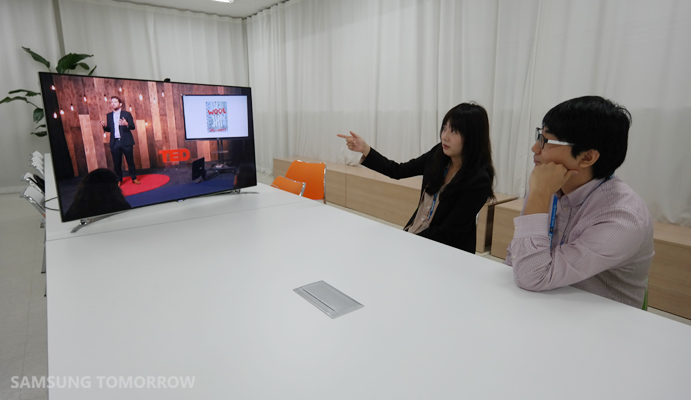