It’s so astonishing to think of all that has happened in the past few decades, especially in regards to technology.  It seems unbelievable, but Samsung’s PCs are already in their 28th year. With growth rates topping 70-110% for the past 3 years, Samsung PC is growing faster than all the other major players in the PC industry.  Back in the late 1990s Samsung sold a mere 100,000 laptops, but 17 years later in 2007, they sold 1.5 million.  Not satisfied, Samsung set a goal of 10 million laptop sales and 3 years later in 2010, they achieved that goal. 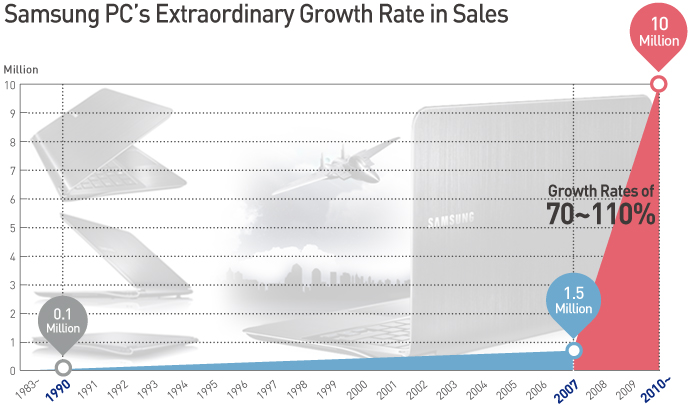 There are many reasons behind Samsung PC’s extraordinary growth.  Though innovative aesthetic design is one factor in Samsung PC’s success, the company initially met challenges expanding to the global market.  But undaunted, through persistence and hard work, Samsung, being a market leader in semiconductors and LCD panels, has shown that the ability to self-sufficiently plan, produce, and sell were key factors in their success.

Check out this quick historical timeline to see how far Samsung has come! 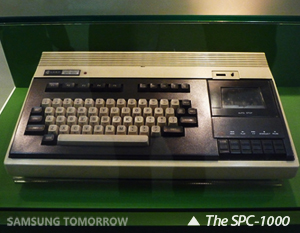 1983: Samsung’s First Computer – As an extension of their home appliance production, Samsung began the manufacture of computers in March.  Initially, the Samsung PC was a branch of the home appliance department.  It was around this time that IBM and Apple were both starting their PC businesses, so Samsung was seen as something of a clone. But still, the significance lies in the fact that the computer was actually produced, and Samsung did not miss an opportunity even then.  Samsung’s first PC, the 8bit SPC-1000 Desktop Computer would be considered an electronic typewriter by today’s standards. 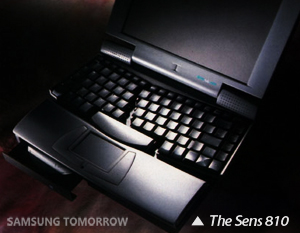 1996: Innovations in Keyboards – The Sens 810 Notebook was released featuring the curved butterfly keyboard, designed to expand for easier typing.  Though similar designs existed in desktop form, it was a first for laptops.  The keyboard’s revolutionary ergonomic design drew a lot of attention and it became the Time Magazine’s Editor’s Choice Product for the month of July.

2002: Easy Access to Media – The Sens Q760 became the first laptop computer to integrate a media docking station.  This device allowed external connection of audio, CD, floppy disk and hard disk drives. When docked to the station, the Q760 would be like a full PC while when separated, it’s more mobile. 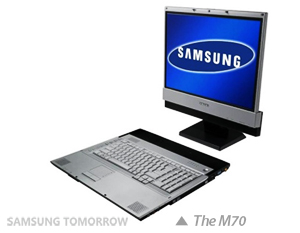 2005: A Removable Screen – The M70 Notebook was introduced with its extraordinary ability to remove the 19inch LCD screen and connect it to a monitor.  Tablet PCs were just a figment of someone’s imagination at this time, but you can see the idea might have been born in the M70.  Despite its technological superiority and innovation, the high cost and the as-of-yet immature online media content market prevented the M70 from reaching its full potential. 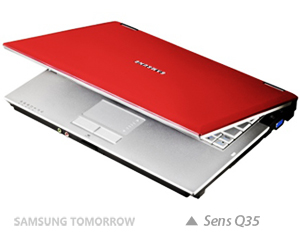 2006: Laptops Go Wireless, Fast – Wi-Max was integrated into a notebook PC for the first time with the Sens Q35 Notebook, released commercially in South Korea and Russia, while in February of 2011 the X460 Notebook featuring 4G LTE was commercialized with support from TeliaSonera, a Swedish telecommunications company. Before smartphones became mainstream, Samsung PC developed products capable of mobile computing with cooperation from a number of top telecommunication companies around the world. 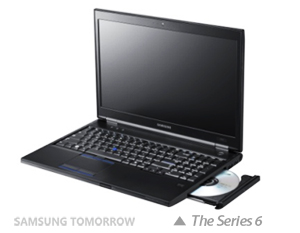 2011: The Stronger the Better – This year, Samsung released the Series 6 which can withstand 1000kg of pressure for business-to-business sales.  Thanks to its internal pressure/impact protection design, the HDD, LCD, and main board function without a problem even after a 1000kg object is dropped on it from a height of 76cm.  It is able to withstand 3 to 5 times the pressure of an average laptop, which can typically only tolerate 200 to 300kg of pressure.  The target consumer is someone who spends a lot of time on-site or out in the field.

Samsung Laptops: The never-ending quest to be thinner and lighter

Since Samsung PCs full-scale entrance into the laptop business in 1990, it has always strived towards technology and design that could achieve a thinner and lighter laptop. Samsung PC wanted to differentiate themselves by focusing on a thinner, lighter, laptop so it could truly achieve its goal of portability. 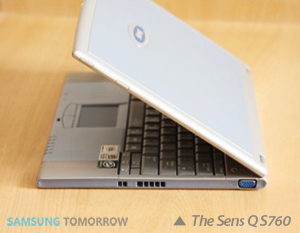 2000: Important Milestone – The Sens Q S760 was a hit, being the slimmest 14inch laptop, only 21 mm, at the time of release.  Though thicker than the 16.3mm of Series 9 of today, it was revolutionary in a laptop market saturated with thick, bulky products.  The Sens Q S760 enhanced Samsung’s “Thin & Light” image while solidifying its position in the thin and light laptop markets. 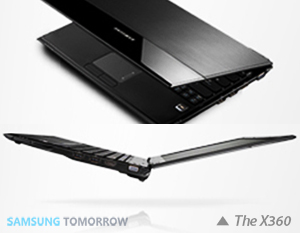 Late 2000s: Up to the X360, Samsung PC gained insights into the design, production, and manufacture of ultra-slim, ultra-light products.

2011: Our Best Notebook Yet – The Premium Series 9 Notebook was released in February of this year, developed from the outset with the goal of amazing the world. 16.3mm thick (15.9mm at the thinnest point) and weighing a mere 1.31kg, the ultraslim, ultralight Series 9 featured an aerodynamic design, reminiscent of a sports car.  Twice as bright (400nit) and 60 times more colorful (1.6 million colors) with the SuperBright Plus display, the Series 9 can also detect the brightness of its surroundings, and the “Backlight Keyboard” and “Auto-Screen Brightness Control” act accordingly.  The laptop also features the 2011 version of the Intel CPU platform for intense multitasking and USB 3.0 ports for high-speed data transfer.

The Series 9 received tremendous accolade for its superior design and marketing.  Ranked the #1 13inch laptop of early 2011 by Consumer Reports, little doubt was left of its supremacy in performance, portability, display, product extendibility, and other fundamental aspects of a laptop PC.

What’s Next: Emerging Devices Set to Spur a New Era

Samsung Chromebook Series 5: The first computer to utilize the Cloud-based Google Chrome OS
Unlike your typical laptops, with Cloud computing data is not stored on the hard drive but automatically saved on a server.  This means that there is no need to worry even if the laptop breaks or is stolen, since you can log onto your account from any PC.  On top of this groundbreaking operation system is Samsung’s unmatched technology and design and the associated speed, display quality, and mobility, which come together in the Samsung Chromebook Series 5. 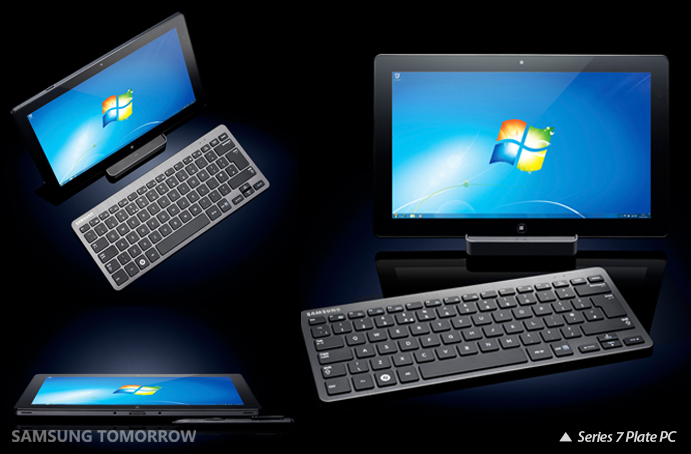 Samsung Series 7 Plate PC: The Windows-based high performance Slate PC
Since the introduction of Tablet PCs and other “smart” devices, there has been some concern for the Notebook PC market.  Taking those concerns and turning them into an opportunity is what Samsung has done with the Series 7 Slate PC. The Series 7 may look similar to a tablet on the outside but internally it’s completely different and so much more.  In addition to the Windows 7 OS, featuring Intel’s latest Core i5 CPU, up to 128GB SSD, and 4GB RAM, the Series 7 has specifications that would blow any tablet PC out of the water.

Though some may fear for the PC market due to the introduction of media tablets, with the Google Chromebook and Series 7 Slate PCs among other products, Samsung plans to keep pace with consumer trends offering superior traditional laptops while also introducing emerging devices like the Slate PC.

Samsung continues to dream bigger dreams and pursue more ambitious goals.  In addition to expanding the customer base from just consumers to other businesses, Samsung hopes to grow its market from beyond Europe and South Korea to emerging markets throughout the world from Latin America to Africa to the Middle East.

The Solar-powered netbook (NC215S) introduced this May at an African forum was especially well-received, able to charge itself using only the power of the sun.  Samsung has also taken great steps to make technology greener, including production of more energy efficient laptops and PCs.

Who knows what our timeline will look like in another 28 years, but we just wanted to take a moment to reflect on all that has happened.  Considering new innovations happen every day, we’re sure we’ll have more updates in the (very near) future!