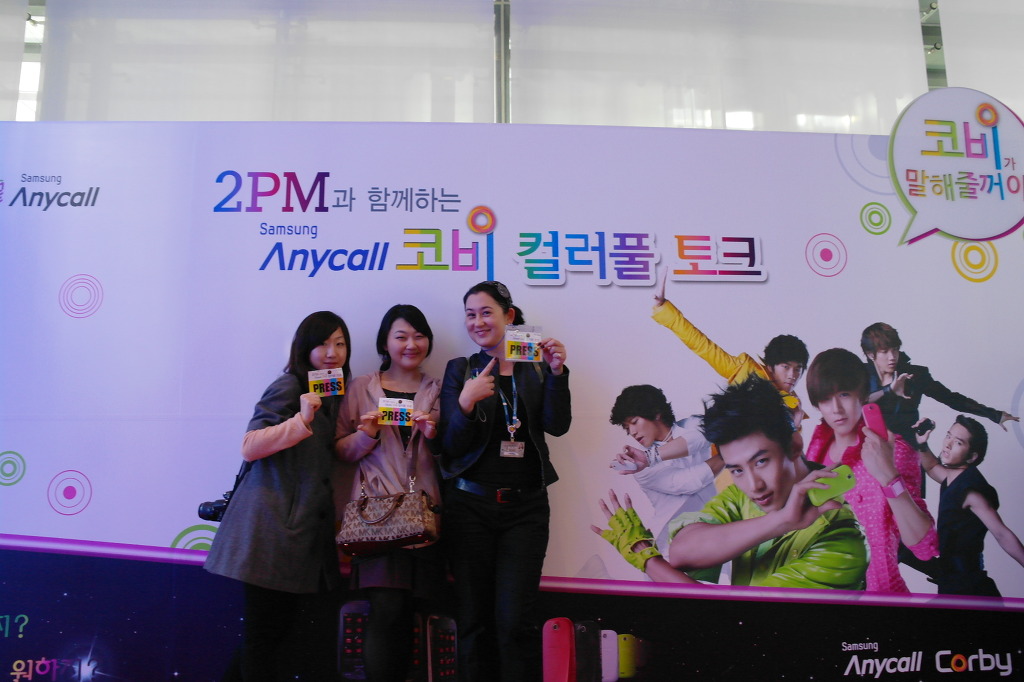 Top Asian Boys Band “2pm” receives 10 point out of 10 point for it’s meet and greet in Samsung Electronics Delight Hall, Seocho-gu on Saturday 6th February 2010.
Seoul,07.02.2010,
One of South Korea’ s hottest boys band “2pm” appeared last Saturday 6th February 2010, at the Delight Hall of Samsung Electronics Co. Ltd. In Seocho-Gu, Seoul, during 2 hours of meet and greet with the fans.
Approximately 400 groupies were pre-selected from all over the nation and allowed to enter the flagship display hall, shortly before 2pm, in order to passionately cheer for their idols, the 6 members group of Korean and Thai origin.
Managed by Park Jin-Yong, CEO of JYP Entertainment who also stands behind the success of “Korea’s King of Pop – 비/Rain” or Wonder Girls, the group debuted in September 2008, with their single “ 10 points out of 10 points”.
The success chained on with released songs such as “Only You”, “Again & Again” or “Heartbeat”. At this stage, the group is composed of 6 male members named Junsu, Nichkhun, Taecyeon, Wooyoung, Junho and Chansung, all aged between 20 ~22years.
Most of the members are born in different parts of Korea, apart from Nichkhun, who is of Thai and Chinese descent with an American Citizenship.
Since their debut, 2pm skyrocketed to the top of the music charts in Korea and Asia, where they were seen specifically via Music Shows such as M!Countdown, Inkigayo or, on a broader level, the M.net Asian Music Awards.

(Sweet & Handsome with a school-boy look: from left to right we can see Junsu, Junho, Taecyeon, Chansung, Wooyoung, Nichkhun, lead vocalists and performers of 2pm)

2pm is since the launch of Samsung’s colorful Mobile Phone “Corby” the representative face of the advertising campaign and as such, highly visible on TV Commercials and Posters all around the town.
Not being able to escape the hype about the handsome, young singers, I joined the 2pm meet and greet session as a representative of Samsung’s Blogger Community in order to witness the event in “live”. Frankly, I got really exited, since I was truly looking forward to see the vocalists, known for their acrobatic dance-style.

The event started exactly at 2pm with the welcome speech of the Master of Ceremony and an opening act of funky break-dancers, dressed up in the colorful cloths, representing the Corby Mobile Phone Colors.

Next to eye-catching break-dances, the Corby TVCF Dance-Choreography was performed under big applause of mostly female fans in their teens and 20ties. Male audience and above 30ties reflected the minority, but they were equally passionate to actively join the games on stage, in order to get closer to their stars and win certain gift-certificates or other fan-items.

(Fans competing against each other with dramatic dance styles, entertaining the audience.)

I have to say that I was really impressed with the behavior of the fans, who screamed their lungs out of their throat but well behaved while taking of their shoes in order to step on the cussions for a better view. The fans moved around carefully, paying a lot of attention not to harm the stylish display area.
Furthermore, at the end of the event, the location was almost as clean a before ~ Well Done Fans ^^.

(Fans taking of their shoes before climbing on the black cussion)

(Fans are keen to get their stars on their personal screen. )

The show continued with the MC who took some of the more courageous fans on stage to perform the recent song “Heartbeat”. The fans were cute and energetic while showing off their most dramatic dance-moves, trying to compete with other groupies, in order to win the prices.
Shortly after, the highlight of the event,“2pm” itself, appeared on stage with a big applause and the Corby sound-track, filling the airs of the Delight Hall.
The singers were wearing a sort of school-boy look with black tight leggings and boots combined to beige/white color combinations on top. Beatle like hair-cuts and cute bow-ties made the final polish.
The MC asked each member to present himself and undoubtedly the fans went crazy for Taekyon and Nickhun, before everyone sat down on their stool. 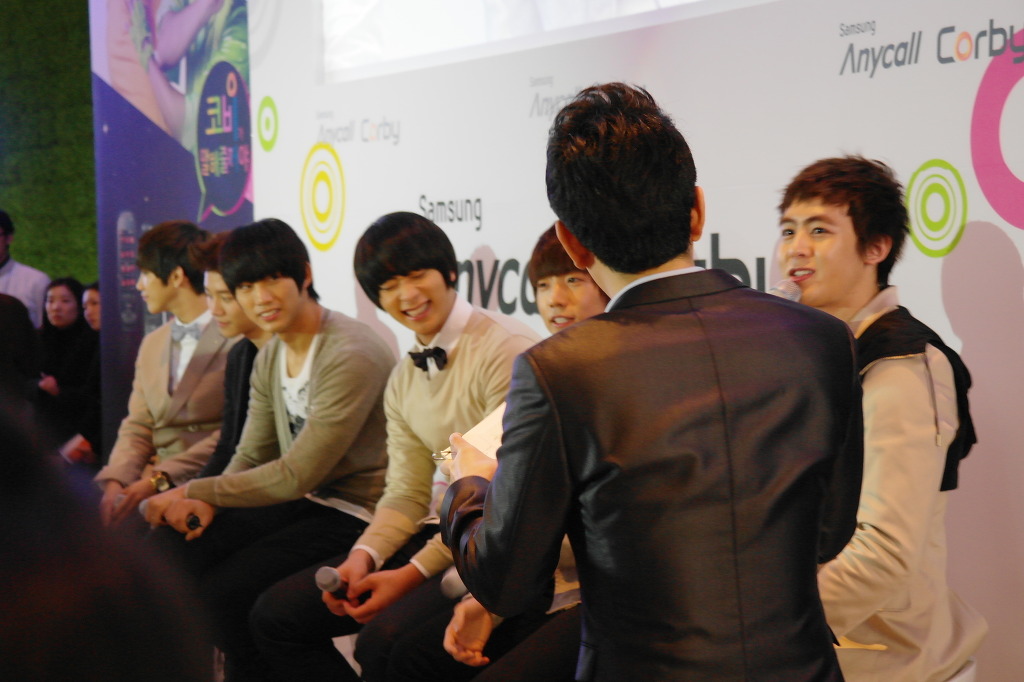 Each member was asked several questions, to give their fans a slight inside into their life and habbits. As such Chansung mentioned that he considers his thighs as his most favourable body part and Taecyeon mentioned that he likes to drink Vanilla Latte, while Nichkhun explained that he is still recovering from his back-injury, which he got during the shot of the Corby TVCF.
Considering the fact that Nichkhun is not of Korean origin, I was really amazed by his overwhelmingly good Korean speaking skills. He seemed to understand every word of the MC and the fans and he replied without hesitation and even with a Korean accent.

(2pm is viewing the “making of” Corby TVCF)

The event chained on with the viewing of the “Making of” the Corby TVCF and “behind the scenes” sequences.
After short discussion between the MC and the band, each vocalist received a Pan-card containing several ” Best Shots” of the fans, done with the cameras displayed at the Delight Hall.
After the band chose each one their most favourable picture, they called the person on the photo on stage to join the stars for some Q & A games.

(2pm members are selecting the best “Fan-Photo” from each Pan-card.)

The fans were usually very shy and some were trying to hide their faces while beeing on stage, but when it was time to participate in the game, they were all full throttle.
For each correct answer, the star and fan would give each other a ” Hi 5″ – clap of the hand, which was followed by a big scream and giggles from the fan-side.

The event ended shortly before 4pm and possibilities for signature were provided to some of the selected fans.
Last but not least, 2pm remained on stage with the Corby Mobile Phone equipped in their hand for final photo-shoots of the media, which provided me also a chance to see the stars from close capture.
Very cute, very handsome ^^ is my overall feedback!

I can say, that the experience was quite unique and I wouldn’t miss the chance to participate Again & Again ^^ at such a meet and greet of great korean stars.
The possibility to come closer to the idols, see the action and reaction between stars and groupies, was fun and passionate.
So lets check out with which great plans Samsung will conquer our young and spirited hearts in the future and I am pretty sure, we will not get dissapointed.
Samsung Tomorrow? … Is starting now! 🙂 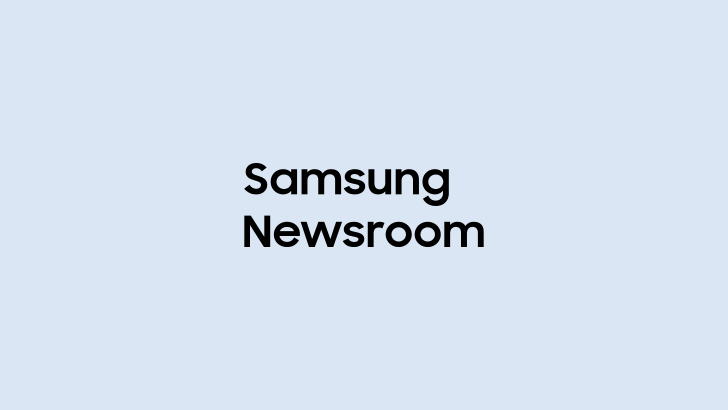