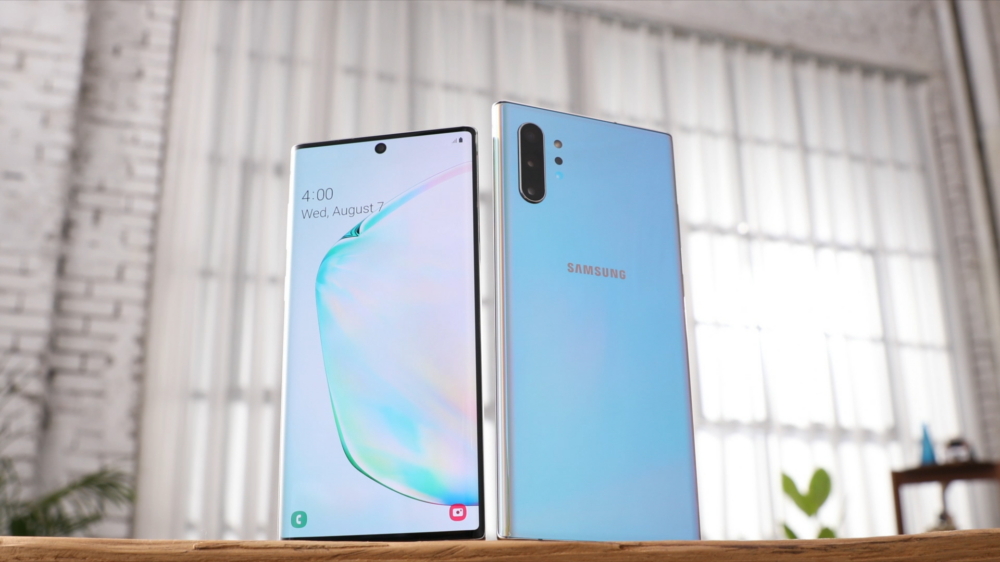 Samsung Electronics left no stone unturned when examining ways to make the Galaxy Note10 and Galaxy Note10+ the most powerful Notes yet. From their sleek and slim designs to their pro-grade video tools, upgraded Super-Fast Charging, AI features and ultra-versatile S Pen, each and every element of Samsung’s latest flagships has been optimized to offer users a smartphone experience that’s second to none.

Let’s explore some of the smartphones’ most exciting enhancements in more detail. 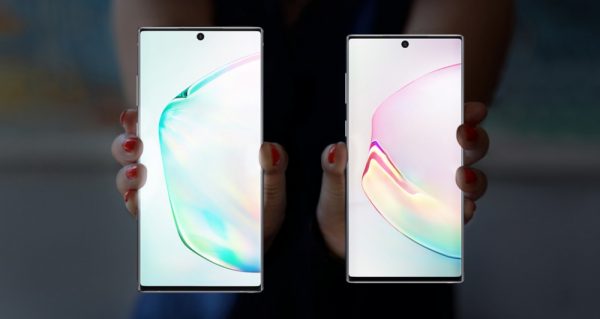 For the first time ever, Samsung is introducing not one but two new Galaxy Note models. The 6.3-inch Galaxy Note10 is 0.1 inches smaller than the Galaxy Note9, and perfect for those who want all the power and performance that comes with the newest Note, but in a more compact form. The 6.8-inch Galaxy Note10+, meanwhile, is a full 0.4 inches bigger than last year’s Note, and boasts the largest display that the series has ever seen.

Both models feature elegant forms that build on the Note series’ premium design heritage. But what makes the Galaxy Note10’s design so striking boils down to more than simply looks. It’s also exceptionally light and thin, weighing in at 196 grams[1] and measuring just 7.9mm thick.

During the development process, Samsung trimmed down key components to ensure that the smartphones would cut an especially slim profile. Included among these are the S Pen itself, which now features a sleek and durable unibody design that’s lighter and more rounded than previous editions, as well as a vapor chamber cooling system that’s the slimmest in the world. Measuring just 0.35mm thick, this innovative technology optimizes performance by boosting GPU efficiency – helping ensure that the Galaxy Note10 stays cool during heavy use.

To complete the smartphones’ sleek design, Samsung simplified the button layout. Now, the devices’ right-hand sides are completely button-free, and the Bixby and power keys have been integrated into a single, customizable button located on the left. Instead of a 3.5mm headphone jack, the smartphones include support for both USB-C and wireless audio, and feature a pair of USB-C earphones in-box.

The smartphones’ screens are as stunning as ever, and they’re even more spacious thanks to the all-new, nearly bezel-less Cinematic Infinity Display. At the top of the display is a single small, centered camera cutout that takes up as little room as possible to offer users more screen. The camera’s placement not only brings balance to the display, it also ensures more natural and symmetrical selfies and video calls. The Premium Hole Display has additionally been verified by the experts at UL to bring color and brightness uniformity. 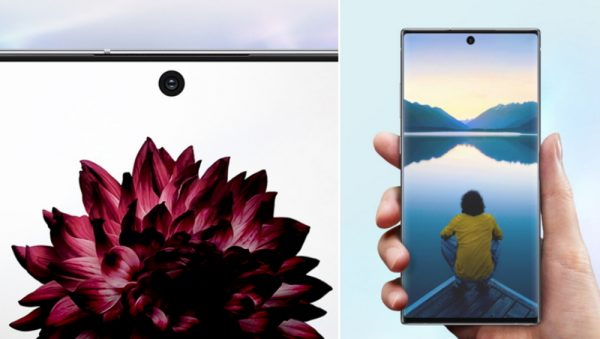 Whether you’re gaming or editing photos, watching videos or shooting your own, you can trust the Galaxy Note10’s Dynamic AMOLED display to enrich your experience with peerless picture quality – providing superior brightness, contrast and color, even in the brightest of environments. The display is also incredibly durable, thanks to Samsung’s use of ultra-strong Gorilla® Glass 6 on both the front and back of the devices.

Suffice it to say, these smartphones are no slouches when it comes to speed. The Galaxy Note10+ makes long charge times a thing of the past by adding upgraded Super-Fast Charging (up to 45W)[2] to a list of charging innovations that also includes Wireless PowerShare and Fast Wireless Charging 2.0.

This time-saving technology enables the device’s 4,300mAh[3] battery – the largest that the Note series has ever seen – to store a full day’s worth of charge in just 30 minutes. So users can game, stream, browse, and even shoot and edit video with confidence, and without worrying about whether their battery will last through the day.[4]

Samsung also optimized its latest flagships with AI technology that regulates performance based on how you use your phone. One of the most innovative examples of this optimization is the NPU (Neural Processing Unit)-powered Game Booster. When users are enjoying a heavy gaming session, it’s working behind the scenes, collecting and analyzing system, user and game data and optimizing performance and power consumption accordingly. 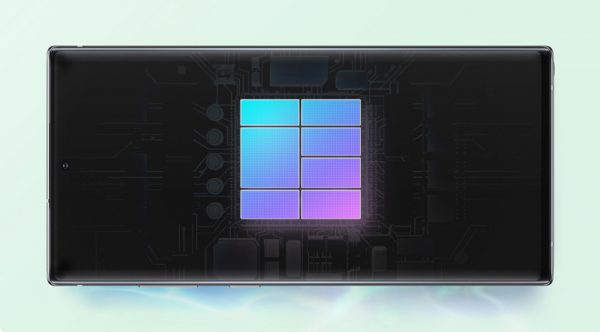 The devices also feature a next-generation seven-nanometer AP chipset that boosts CPU and GPU performance by up to 33 and 42 percent, respectively (compared to the Galaxy Note9), and helps ensure that games and videos are snappy and smooth. 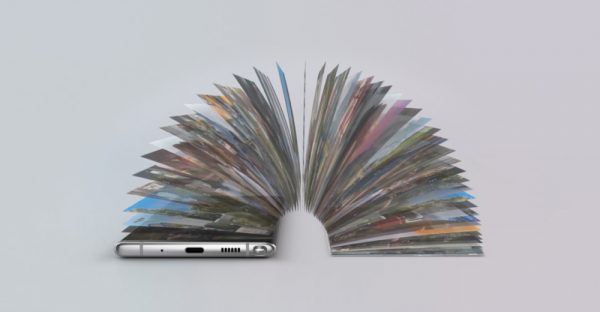 The Galaxy Note10 takes the Note series’ signature feature to new and exciting heights, offering more advanced device controls, up to ten hours of use on a single charge, and a slew of other enhancements that nurture users’ creativity and simplify daily life. 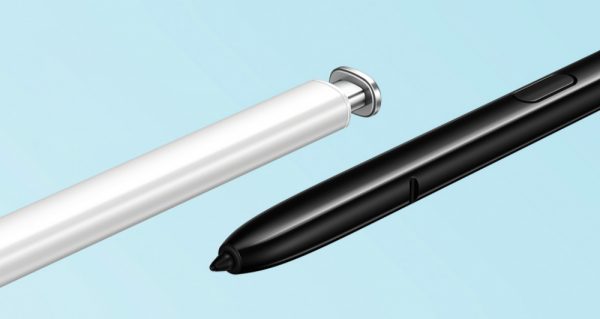 Last year’s addition of Bluetooth Low Energy (BLE) connectivity transformed the S Pen into a magic wand of sorts – one that could be used to manage key device functions from afar. The new S Pen takes that convenience a step further with the introduction of customizable, BLE-based gesture controls known as S Pen Air actions. Powered by the S Pen’s six-axis sensor, this particularly handy feature makes it possible to, with a flick of the wrist, switch camera modes, zoom in and out, manage music and video controls, and more.

The way it works is simple: with the S Pen pointed toward their phone and its button pressed, the user can, for instance, draw a circle in the air to instantly zoom in or out of a shot, or make an upward motion to switch from the selfie to the main camera, or vice versa. Best of all, because the S Pen’s gesture controls are fully customizable, users can customize their Air actions in whichever ways work for them.

The Galaxy Note10 makes notetaking on a mobile device more convenient and intuitive than ever. Now, with a click of the S Pen’s button, users can seamlessly digitize their handwritten notes and convert them into various formats, including Microsoft Word, for easy editing and sharing. The handwriting-to-text conversion is as simple as it is accurate, thanks to a deep-learning database and advanced document layout analysis technology. 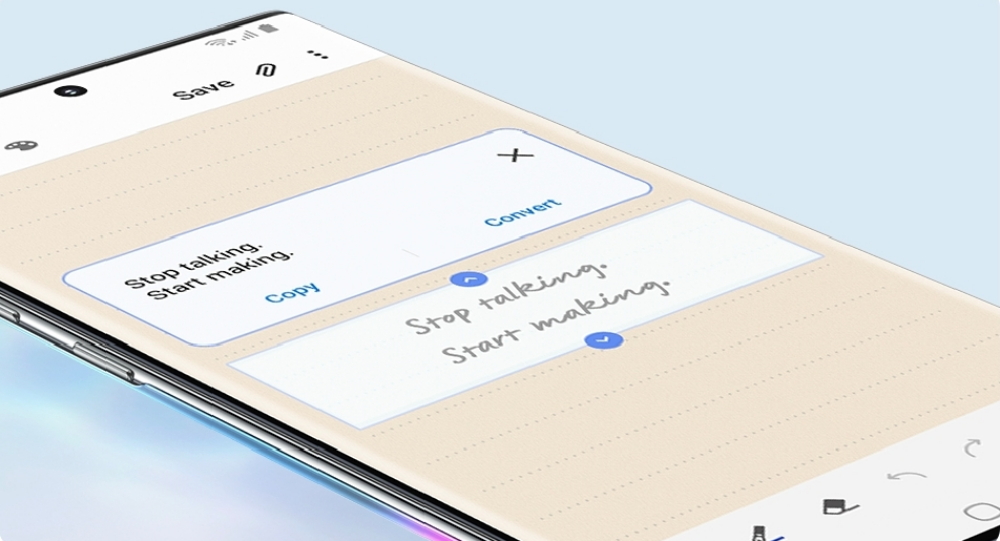 Users can also customize their notes to highlight ideas or emphasize key points using functions like pinch zoom, which lets you shrink and enlarge handwritten notes, and Quick highlighter, which offers a simple means to highlight handwritten and typed text. Screen off memo has also been updated, and now offers users a variety of color options. 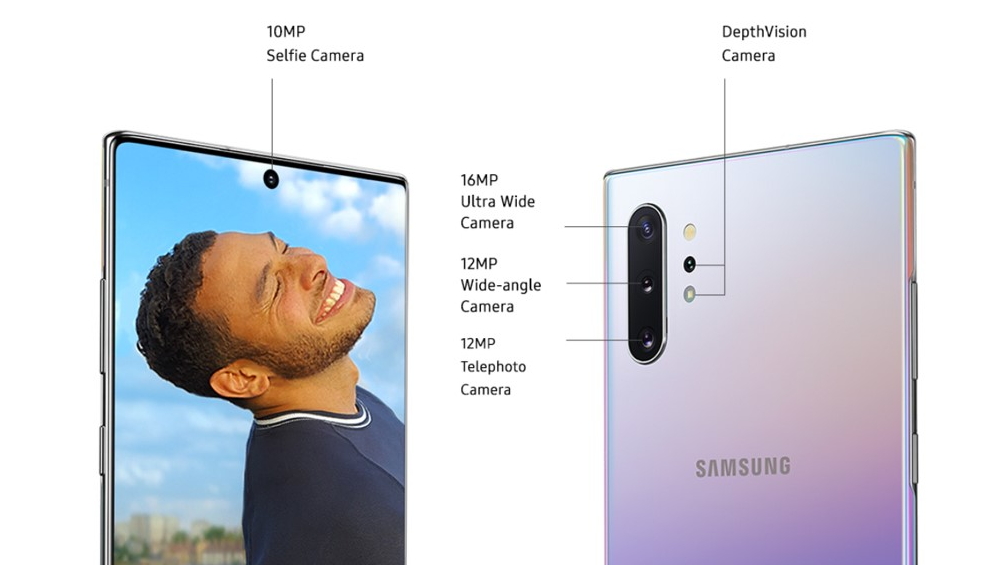 Standout features include Zoom-In Mic and Screen recorder. The former is an all-new, AI-powered feature that takes zooming in to a whole new level by amplifying the sound of audio sources in the camera’s frame. With Zoom-In Mic, when users zoom in on the subject of their video, they’ll also be able to zoom in on their subject’s voice (amplifying its sound), and minimize background noise.

Screen recorder, meanwhile, offers a simple tool for capturing what’s on your screen, and allows you to use the S Pen to add live notes to your video. It’s perfect for creators, including streamers and vloggers, as it also offers a front camera-powered picture-in-picture function that creators can use to add reactions to streams or enhance their tutorials.

Like Screen recorder, the Galaxy Note10’s new AR Doodle feature was designed for creating one-of-a-kind content. In a nutshell, the function allows you to use the S Pen to create AR (augmented reality) drawings, effects and animations that can track users’ faces, and offer a fun way to interact with your surroundings. AR Doodles can be stationary, or layered onto moving subjects – in which case the Galaxy Note10 will track the subject and ensure that the doodle remains in place. The feature’s Face mode effectively lets you create your own selfie filters, while Everywhere mode lets you add fun illustrations – like a trail of delightful AR bubbles – to the world around you. 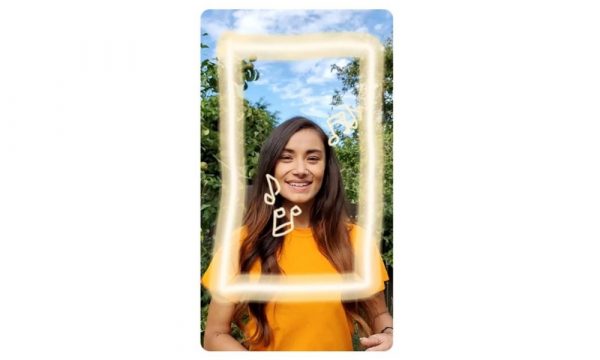 The Galaxy Note10+’s DepthVision Camera adds a cool new dimension to capturing content with its built-in 3D Scanner. This clever innovation enables the camera to capture its subject as a 3D rendering that can be seamlessly added to photos and videos.[6] This opens up a world of possibilities in terms of creating shareable content, offering users endless fun by letting them inject themselves and their friends into more shots and clips. For example, before traveling, an action-figure collector could use the function to create 3D scans of their figures that they could insert into videos during their trip to make their experience that much more memorable.

The camera’s Live focus video function has been expanded to feature a wider variety of bokeh effects (including blur, big circle, color point and glitch) that blur videos’ backgrounds and make your subject really stand out. Super steady video stabilization has also been enhanced, and now boasts support for the camera’s Hyperlapse mode, as well as an improved sample rate (from 500MHz to 833MHz) that enables it to produce smoother and more natural videos.

In addition, the Galaxy Note10’s Gallery app features an all-new, built-in video editor that allows users to combine video clips, adjust playback speed, add transition effects and license-free music, layer text and more, either by hand, or with the precision of the S Pen. It’s simple, convenient, and another fun way that the Galaxy Note10 helps users make their mark. 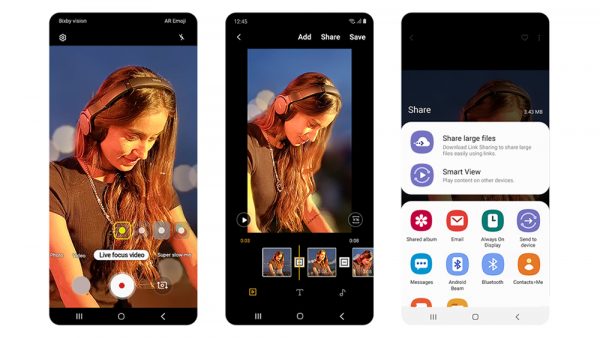 Samsung is continuously enriching the Galaxy ecosystem with connected capabilities that simplify daily life. The Galaxy Note10’s seamless integration with the new Galaxy Watch Active2 is one such example of this effortless convenience. 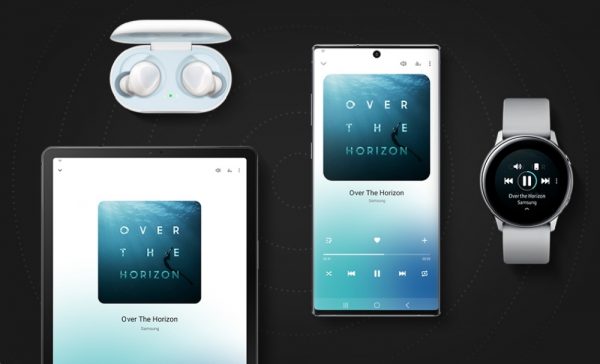 To help users step up their selfie game, the Galaxy Watch Active2 features a handy Watch Camera Controller[7] function that offers users a preview of their shot before they snap it with their Galaxy Note10, lets them take the picture with a tap of their smartwatch’s screen, and allows them to easily view and zoom into their photo to make sure they’re happy with the result.

Connecting the Galaxy Note10 to a PC or Mac is just as simple with the newly enhanced Samsung DeX for PC. Now, all users need to do to transition their mobile experience to a larger screen is connect their Galaxy smartphone to their laptop or computer using a simple USB cable. Once connected, they’ll be able to easily drag and drop files between their smartphone and PC, and conveniently manage both PC and mobile apps side by side.

In addition to making Samsung DeX for PC even more dynamic, the Galaxy Note10 features Link to Windows integrated directly into its Quick Panel. This makes it easier for users to work efficiently by allowing them to focus their attention on a single screen. After connecting to their Windows 10 PC with a click, users will be able to mirror their phone’s screen, view notifications, send and receive messages[8], and sync recent photos[9] directly from their computer. 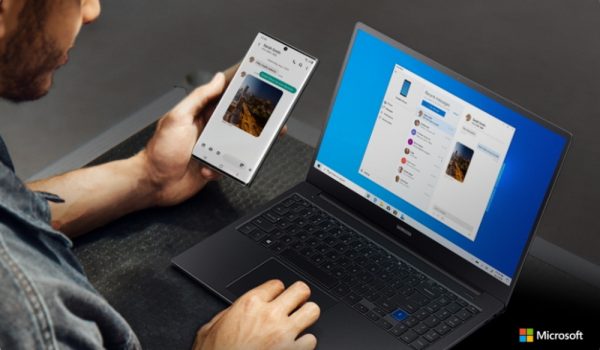