In the fall of 2020, Allie Langwald, Physical Education (PE) and Health Teacher and Athletic Director at Hope of Detroit Academy Middle & High School, had the daunting task of implementing quality remote instruction in place of physical education due to the pandemic. Allie perused DonorsChoose, the leading nonprofit education funding site, for inspiration regarding fun group projects and was drawn to Samsung Solve for Tomorrow, a national competition that challenges students in grades 6-12 to use STEM (science, technology, engineering, and math) to tackle local community issues in a sustainable way.

Hope of Detroit Academy, a STEM-focused charter school located in southwest Detroit, and its students were no strangers to STEM, however, Allie was initially hesitant about moving forward with the Solve for Tomorrow entry. As a PE and health teacher, would her project be taken seriously in a national competition? Upon taking a closer look at the entry rules, she realized that her role didn’t disqualify her from participating. With big dreams and a lot of hope, she rounded up three enthusiastic students, 16-year-old Yaritza, 13-year-old Itzel, and 17-year-old Abrahan, and immediately began exchanging creative community-driven concepts. “Yaritza, Itzel, and Abrahan expressed enormous pride for southwest Detroit, including the diverse community and vibrant culture, but felt that visitors wouldn’t be able to look past the neighborhood’s urban decay and blight,” said Allie.

Urban decay is a common phenomenon in cities across America. It occurs when a city, part of a city or even small-town downtowns fall into disrepair. A characteristic of urban decay is blight, which is marked by condemned homes, vacant lots, piles of trash, and discarded tires, among other forms of waste. The adverse impact on people living in these areas extends far beyond the visual. Blight affects people’s lives in many ways, including economically, socially, psychologically, and physically. 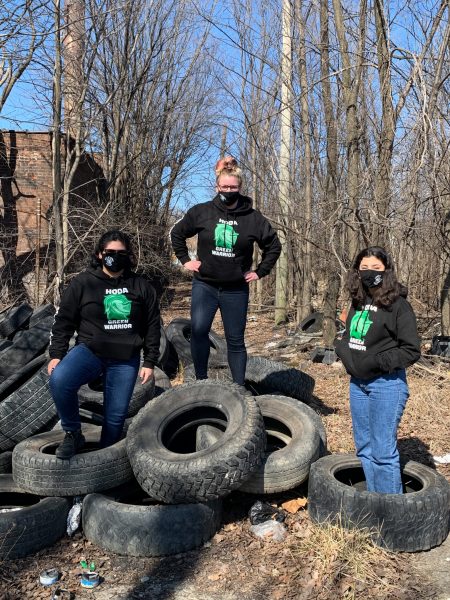 Upon further research, the team unearthed a stat that convinced them this was the path forward for their STEM project. According to Siemens’ The Green City Index, Detroit ranked as the overall least ‘green’ U.S. city. Drilling deeper into the category of ‘waste,’ the city also ranked last in the 27-city North America Index. “The removal of blight is critical to the health, safety, and welfare of the community. For example, it can be scary for a child to walk past abandoned homes on their way to school. Boarding up the windows and door, while still an eyesore, will put the local community at ease because it will secure the property against vandalism or unlawful activity,” added Allie.

Named after the school mascot – the Warriors – and a goal to cultivate a greener community, the team launched the Green Warrior app in February 2021. The location-based app, which took over a month to code and build, allows users to drop color-coded pins on an area map to tag four specific forms of blight: abandoned homes, vacant fields, tires, and trash. The pin can be accompanied by images and a description, and once submitted, pin notifications serve as a ‘call to action’ for state and city officials, community groups, and community members. After the clean-up is complete, users can swipe right to remove the pin.

Allie, her trio of students, and fellow teachers took to the streets, dropping nearly 400 pins throughout southwest Detroit in the first few days post-launch. In parallel, they reached out to the following community partners for clean-up support: Green Tree Plastics, a family-owned manufacturing company that agreed to gather plastic items and transform them to park benches for the school; Cass Community Social Services, a homeless services nonprofit that collects and converts tires into mud mats; Detroit City Council member Raquel Castañeda-López, whose office works to board up or tear down abandoned properties and manage vacant lots; and Mayor Mike Duggan, whose office picks up excess trash.

Because of Samsung Solve for Tomorrow and their winning placement within the competition, news of the student-led clean up made it all the way to Michigan State Representative Abraham Aiyash (D-Hamtramck) and Congresswoman Rashida Tlaib (D-MI13) – who also happens to be Yaritza’s idol. Then the accolades came, including a Spirit of Detroit Award for outstanding achievement or service to the citizens of Detroit and a 2021 Congressional App Challenge honor, the most prestigious national recognition for students in computer science. Due to the exposure, Hope of Detroit Academy has received additional funding from Ferris State University to build a state-of-the-art STEM lab and incorporate STEM education and vocational tracks to their curriculum.

To date, 432 pins have been tagged in the Green Warrior app and more than 50 were marked as green to signify the site had been cleaned. On the horizon are plans to create a Spanish-language version of the app and add potholes to the list of blight categories. Abrahan is a freshman at Wayne State University, Itzel is a freshman at Cass Technical High School, and Yaritza – now a senior at Hope of Detroit, has applied to a couple of universities, highlighting the app and its impact in her applications. “Solve for Tomorrow took my mind off all the uncertainty and stress that COVID caused during my junior year of high school. The competition was a much-needed and rewarding distraction,” noted Yaritza. 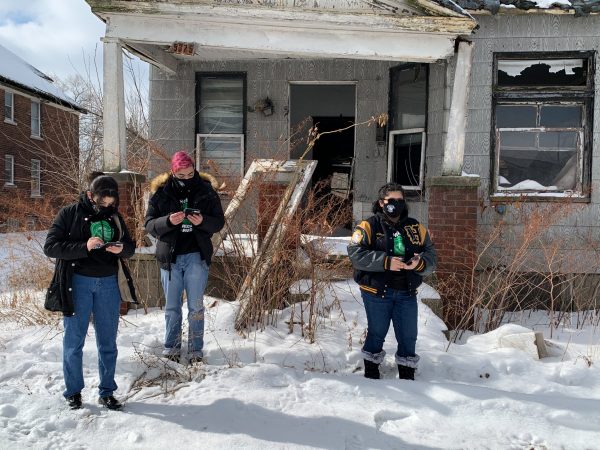 As for Allie, in addition to her current duties, she now oversees an environmental STEM class focused on designing projects that benefit the community. She too was lauded for her efforts related to the project, including a Hope of Detroit Teacher Hall of Fame achievement and a nomination for MAPSA’s MI Charter Teacher of the Year Award. Regarding lessons learned from the initiative, Allie said, “Samsung Solve for Tomorrow pushed me to reframe how I think of myself and my capabilities as an educator. I never thought I could lead a team to victory in a national STEM competition or build an app. And, as a result, my students and I are helping our community become more sustainable and resilient.”

Editor’s note: While Hope of Detroit Academy didn’t progress to the State level of the Samsung Solve for Tomorrow 2021-2022 competition – the school’s second time competing, we commend them for their latest STEM project that leverages tech to assess crop readiness for their urban farm, which was created to improve food security, nutrition, and self-sufficiency within the community.