Tips and Tricks to Unlock the S Pen’s Full Potential

The S Pen is one of the biggest standouts when it comes to several of Samsung’s premier mobile devices, including the Galaxy Tab S4 and now the Notebook 9 Pen, but when it comes to the super powerful Galaxy Note9 smartphone, the S Pen’s Bluetooth Low-Energy (BLE) connectivity offers an un-paralleled user experience that needs to be tried to be believed. Although it’s easy to use right out of the box, there are some advanced functions to help you get even more from your device. Here, we’ll show you how to get the most out of the S Pen to enjoy a more fun and efficient mobile experience. 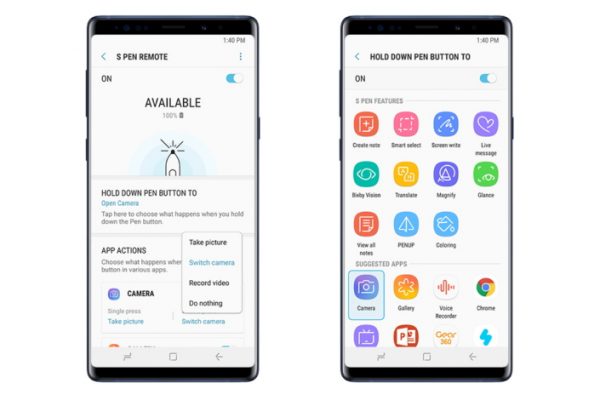 Users can customize clicks of the S Pen’s button to perform specific actions within specific apps. Single clicks and double clicks can designate different actions, while holding down the pen button can be assigned to opening other apps and the S Pen features. This means that you can open the camera by holding down the S Pen’s button, click once to take a picture and twice to switch cameras without the need to touch the smartphone’s screen at all.

The S Pen’s single and double press functions are compatible with more than 10 apps so far, and that number is expected to grow. You can pick and choose which remote control functions you’d like to enable by accessing the S Pen’s settings.

Flex Your Creative Muscles with Photo Drawing and Live Drawing

Good news for those of us who’d like to fine-tune our artistic skills: the Galaxy Note9’s new Photo Drawing and Live Drawing features offer simple tools to add a creative flourish to your images.

Both feature integration with PENUP —a social network for creative types to share S Pen-created artwork. Photo Drawing allows you to use the S Pen to draw over images as you would with a sheet of tracing paper. Once you’re finished, you can delete the original photo or drawing and save your new creation as a separate image.

Introduced in the Galaxy Note8, Live message allows users to easily send handwritten notes, make animated GIFs, and create the perfect emoticon to capture the emotions they wish to express. The feature was recently enriched for the Galaxy Note9, with three new pen effects bringing the total number to six effects, and various pen colors to choose from. Live message can also be added to users’ AR Emoji Stickers, bringing an even more personal touch to their messages.

The combination of AR Emojis and Live message creates a unique way to make your messages more personal, and makes messaging friends and family more fun.

And So Much More… 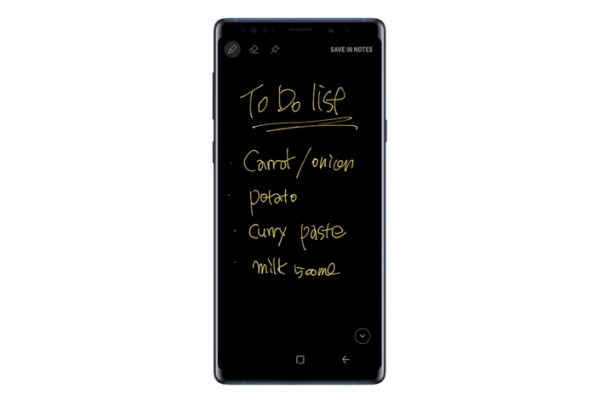 Screen off memo has been a user-favorite feature ever since it was first introduced with the Galaxy Note5. The function gives you the freedom to jot down notes or ideas whenever you need by writing directly on your device’s off screen. The memo can be pinned to Always On Display (AOD) and automatically saved in Samsung Notes.

In conjunction with Samsung DeX, your Note9 can power a desktop-like experience and simultaneously function as a note-taking device. While a diverse range of applications and functions can be operated from an external display, your device can be used to independently take notes with your S Pen.

The S Pen’s Air command menu offers users instant access to some of its most convenient functions. The menu can be customized with up to ten of your most frequently used functions with S Pen and shortcuts. Such S Pen functions include Smart select, which allows users to select, clip and collect content in one quick move with the S Pen in a desired shape, and the Translate function which lets users highlight and translate text on the screen, without the need to navigate away to another app. The Air command menu can be accessed simply by taking out the S Pen or by hovering the S Pen over the screen and then clicking the S Pen’s button.

Air view is another convenient function that offers instant insight into your phone’s content, simply by hovering the S Pen over the device. With Air view, you can see a short preview of your schedule in the Calendar app, text of web pages, and enlarged thumbnails of your pictures saved in the Gallery.

With innovative features designed to enhance work and play, the S Pen for the Galaxy Note9 has redefined the mobile lifestyle to bring even greater convenience through connectivity.