10 for 10: Highlights from a Decade of Galaxy Innovation

What does 10 years of industry-leading mobile innovation look like? For the Galaxy range, it takes the form of smartphone displays that redefine immersion, enabling users to see and do more than ever before; performance technologies that keep users connected longer, more securely, and that much more comfortably; and software and camera innovations that continue to push the limits of what mobile devices can do.

And that’s just the tip of the iceberg. Take a look at the infographic below for an in-depth look at 10 of the Galaxy range’s leading innovations that have redefined the smartphone experience over the past 10 years.

Samsung’s introduction of the first smartphone with a Super AMOLED display laid the groundwork for AMOLED technology to become the industry standard, and ultimately helped pave the way for the era of large-screen smartphones.

The Galaxy S10’s Dynamic AMOLED display takes the immersive viewing experiences that Samsung devices are known for to the next level, combining exceptional colour accuracy (100 percent colour volume in the DCI-P3 color range) with a peak luminance of 1,200 nits, and without requiring a filter or compromising picture quality, blue light reduction provides maximised eye comfort.

Those stellar specs, along with the display’s groundbreaking support for HDR10+, a next-generation open standard for HDR video, allow Samsung’s newest smartphones to offer a level of picture quality that’s so spectacular, you have to see it to believe it.

Since its launch, Samsung’s category-defining Galaxy Note line has introduced a variety of intuitive tools designed to help users maximize their productivity. Chief among these is the devices’ signature stylus: the S Pen.

The S Pen equipping the Galaxy Note9 is also the most versatile yet, thanks to its Bluetooth Low-Energy (BLE) support, customisable clicks, and deeper integration with fan-favorite Note features.

Since its introduction, Samsung Knox has helped countless Galaxy users safeguard apps, photos and more from malware, viruses and other malicious threats. Its multi-layered security technology runs through each and every component of a device, from its chipset to its OS through to its applications. Secured by Knox, all your data is securely encrypted and hosted, completely isolated, on a secure place on device to keep your data private.

IT developers and administrators have been driving the security leadership agenda in the mobile industry, and today, Samsung continues to strengthen and enrich Samsung Knox with updates and enhancements that offer businesses and individuals greater security, and greater peace of mind.

Speaking of stalwart security, over the last ten years, Samsung has continuously enhanced its Galaxy lineup with the latest advancements in biometric technologies in order to offer users more tools to protect their devices and personal data.

The Galaxy S5 and Galaxy Note4 were the first devices in the series to offer biometric security in the form of home button-embedded fingerprint scanners. It wasn’t long before Samsung expanded its biometric authentication arsenal with iris and facial scanning respectively.

The Galaxy S5 was the first device in the Galaxy series to achieve an international standard rating of IP67 for dust and water resistance. The Galaxy S7 then achieved an IP682 rating, the highest possible in this certification, meaning that Galaxy users can rest assured that their smartphones are built to stand up to the odd splash, spill or storm.

Prior to this technology, devices stood higher risks of hardware erosion and suffering from electrical shorts when up against adverse conditions. However, Samsung’s technology means that people can use their devices more safely, even in wet environments.

This premium durability standard has now become a staple of Galaxy flagship devices. It’s all part of Samsung’s commitment to ensuring that its devices will be there for users whenever they need them.

Samsung has been at the forefront of wireless charging innovation since the technology’s beginnings, introducing advancements that have helped usher in an era in which charging your phone is as simple as placing it on a pad.

After introducing built-in wireless charging support to the Galaxy lineup with the Galaxy S6, Samsung took the technology to new heights with the introduction of Wireless PowerShare on the Galaxy S10, giving users the power to share their device’s impressive battery capacity supported by the Galaxy S10’s Fast Wireless Charging 2.0. Now, the Galaxy series’ latest additions are not only capable of charging wirelessly, but they’re also capable of wirelessly charging other devices, including Qi-certified1 smartphones and wearables.

Simple, secure, and available almost anywhere, Samsung Pay has quickly established itself as a mobile payment platform that consumers can trust.

Samsung Pay is available across six continents, with more markets joining the fold each year – and the service’s rapid growth and expansion are revolutionizing the mobile payment landscape. As of August 2018, Samsung Pay has surpassed 1.3 billion transactions globally available in 24 markets.

Samsung’s introduction of the Infinity Display in 2017 marked the beginning of a bold new chapter in screen design, following the legacy of the increased screen real estate and better grip experience provided by the world’s first curved display, Edge, that debuted on the Galaxy Note edge.

Featuring a bezel-less, dual-edge design that elegantly spills over the edges of the phone, the Infinity Display pushes the boundaries of immersion, enabling users to see and do more than ever before. Seamless and sleek, the display is a beauty to behold – which makes it the perfect canvas for the likewise stunning viewing experiences that Galaxy devices are known for.

Since its introduction on the Galaxy S8, the Infinity Display has become a signature feature of Samsung’s flagship phones. Each year, the company introduces enhancements that make the display even more engrossing and maximizes screen real estate for users to enjoy. The Infinity-O Display available on the Galaxy S10 range is the series’ most immersive, advanced and revolutionary yet.

Smartphone users have come to expect ground-breaking innovations from the Galaxy series – especially when it comes to the devices’ cameras. The Dual Aperture technology included in the series’ recent flagships is one such example of pioneering camera innovation.

Samsung officially debuted the technology on the Galaxy S9, making the device the first smartphone to feature a Dual Aperture camera. In a nutshell, the technology enables the camera to automatically adjust to various lighting conditions just as the human eye would. It does this by combining an F1.5 aperture lens with an F2.4. The ability to let in more light when it’s dark and less when it’s bright enables the camera to minimize visual distortion and ensures that photos are crisp and clear anytime, anywhere.

The Galaxy S10’s camera comes with intelligent software and professional lenses so that users can capture exactly what they see, as they see it, thanks to an unprecedented Ultra Wide 123° panoramic field of view among other innovations that allow users to capture pro-grade photos and videos. 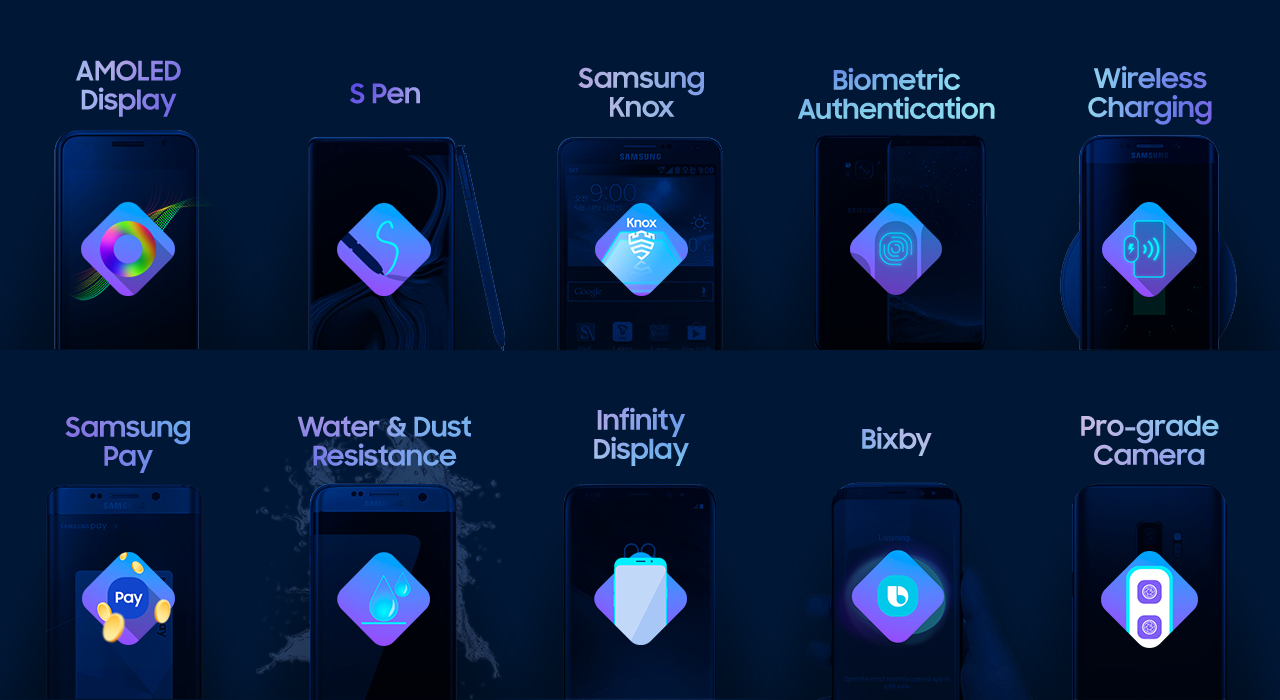 1 Qi is an open interface standard for wireless charging that was created by the Wireless Power Consortium – an industry group that includes device manufacturers, accessory makers and others.

3 Tokenisation is a process that generates virtual information for a transaction without the storing of financial details in a device. This protects users’ financial information.