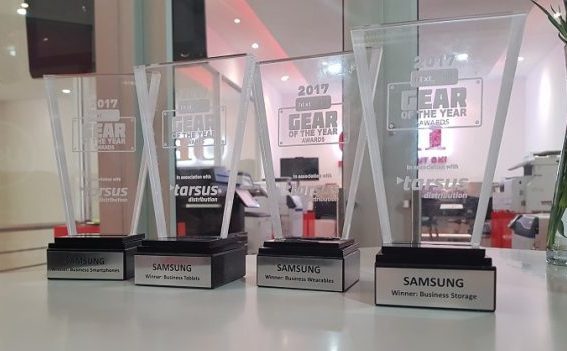 JOHANNESBURG, South Africa, 09 April 2018 – When innovation and people-centred excellence are not just buzz words but core values within a company, it follows that awards will be won. Every year, the much-lauded tech blog htxt. gathers experts, geeks and fundis to put various technology products to the test. Today, Samsung announced their wins in the Gear of the Year Awards.

Justin Hume, Marketing Director for Samsung South Africa, says, “While Samsung doesn’t design with awards in mind, it’s the way in which we approach every product that makes it award-winning. Innovation is key, as is the people who will be using the products. It’s always an honour to be nominated for and win an award for one of our products.”

It wasn’t just one product that won an award – tipped against other leading brands, Samsung came out top in six different categories.

In the category of high-end smartphones, the Samsung Galaxy Note 8 was chosen by the majority of htxt.’s readers as their favourite smartphone of 2017. In the Storage category, the Samsung SSD won an astounding 50.2% of the votes as the favourite way to store data, media and entertainment. Also for storage, Samsung was a winner in the Business Storage category for SSDs and Micro SDs.

When it comes to business tablets, the Galaxy Tab S3 was deemed to be the best Android tablet money can buy. For business smartphones, the Galaxy S8 and S8+ were the devise of choice and the inclusion of the Samsung DeX was a huge influence on voting. The Galaxy Note 8 was also tipped as a favourite among readers, as well as the highly affordable J4.

Samsung also cracked the lead for one of the wearables categories, with voters saying the Samsung Gear Sport and Gear S2 were great all-round fitness trackers. It almost goes without saying that the superlative Q9F QLED Television got over 50% of the votes for not only its incredible functionality but also the deep range of colour achieved.