Samsung Electronics, a global leader in technology and innovation, announced that it has received two awards for its sustainability initiatives by the U.S. Environmental Protection Agency (EPA). The EPA awarded Samsung with the 2017 Cutting Edge Champion Award for its innovative Galaxy Upcycling programme, and honoured the company’s U.S. e-waste collection efforts with the Gold Tier Award for the fourth consecutive year. 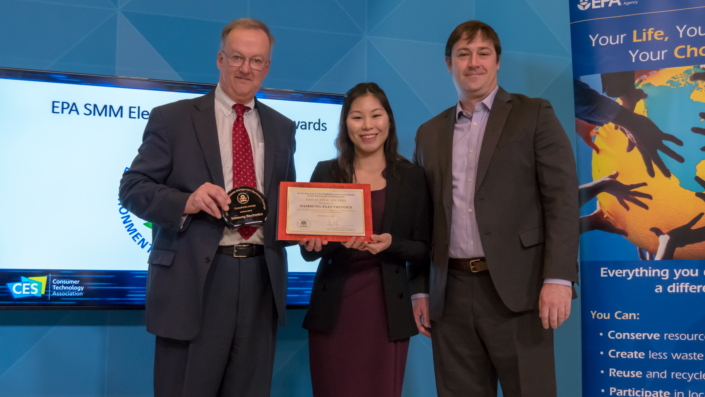 The Galaxy Upcycling programme allows Galaxy phone owners to retrofit the hardware and software of antiquated, used Galaxy phones into new technology products such as closed-circuit TVs, gaming consoles, and IoT devices. The programme puts the tools for transforming devices into new technology in consumers’ hands by providing them with necessary software changes and suggested hardware changes that enable new functionality. The programme was created from the company’s innovation hub, C-Lab; and will launch in 2018. The Cutting Edge Champion Award was presented to Samsung for the Galaxy Upcycling programme’s innovative and environmentally responsible ways to use a product’s materials throughout its entire life cycle. Samsung has been the exclusive honouree of the Cutting Edge Champion Award since the award’s inception in 2017.

“In an effort to curb e-waste and extend the lifecycle of our existing technology, we introduced the Galaxy Upcycling programme which repurposes technology resources into new devices,” said Michael Lawder, Senior Vice President of Customer Care at Samsung Electronics America. “We’re honoured to receive the Cutting Edge Champion Award for this programme and our efforts to extend a products’ life-cycle by repurposing its functionality.”

“Samsung’s creative reinvention of old electronics through their unique upcycling programme is environmental ingenuity at its finest,” said EPA Administrator Scott Pruitt. “I commend Samsung for their innovative efforts to turn old smartphones into new technology products, and I encourage others to follow their lead.”

The awards were presented in Las Vegas at a ceremony during CES 2018.