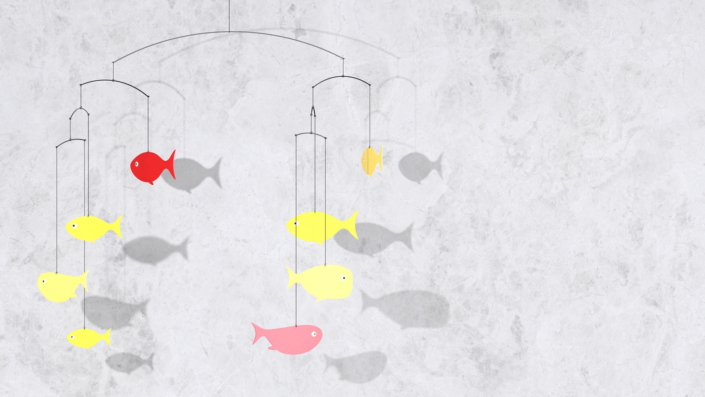 JOHANNESBURG, South Africa – 03 September 2018 – Samsung and Dezeen, a leading design and architectural magazine based in the UK, announced the grand prize winner of the co-hosted ‘Dezeen x Samsung Ambient Mode Design Competition’ at IFA 2018 on August 31. “Kinetic Decor,” designed by Matthew Cockeril, Stephen Waller and Peter Hälldahl of UK and Denmark-based Swift Creatives, was honoured with the grand prize and €8,000 prize money, for best demonstrating how the Ambient Mode feature in Samsung’s QLED TV transforms the TV into something meaningful, even when switched off.

The Dezeen x Samsung Ambient Mode Design Competition, held from June 25 to August 3, focused on the evolving usability of the Ambient Mode, a new feature on Samsung’s QLED TV which blends the TV into the living room and the surrounding space by mimicking the wall’s colour and displaying desired content and information such as the news, weather, photos and music. In order to enter the competition, entrants submitted their best Ambient Mode designs using static or animated images.

“Now in its second consecutive year, the Dezeen x Samsung Ambient Mode Design Competition provides the perfect opportunity to honour leading designers from around the world while acquiring graphic designs that reflect the premium quality of our TVs,” says Justin Hume, Chief Marketing Officer at Samsung South Africa. “The opportunities to increase the usability of the QLED TV’s Ambient Mode is endless. The designs are reflections of how we imagine the Ambient Mode – as a feature that enriches the everyday lifestyles of our consumers across the world.”

The contest awarded €29,500 in total prize money, reflecting Samsung’s ambition to celebrate talented designers and acquire premium concept and design quality from all around the world. The judging panel this year included esteemed designers, Neville Brody and Erwan Bouroullec, who selected the winner based on a complex set of criteria – a full understanding of the Ambient Mode, as well as overall design, originality, usability and seamlessness with the surrounding space and user lifestyle.

The winning design “Kinetic Decor” is a digital re-staging of the ‘mobile’ concept, with the live movements of the design’s fish becoming more animated as a room’s lighting increases or a user approaches. The submission especially received high marks for its connectivity with Ambient Mode content that is already available today.

“Our design aims to bring calm and a beautifully dynamic structure into the living space,” said Swift Creatives team member, Matthew Cockeril. “We were motivated to apply because of the unique way Samsung’s display technology supports designs that are responsive and sensitive to the people within the space it sits.”

Alongside the grand prize winner, four finalists were shortlisted with their designs exhibited as special displays within the Samsung booth at IFA 2018. The designs include “Time Frame,” displaying the outside scenery on the TV; “Bird Clock,” picturing birds sitting on a power line to indicate time; “Architectural Extension,” a virtual space like the balcony that creates the illusion of extended space; and “Sphere,” displaying graphics of the Earth’s rotation matched with relevant content and data, including photos, news and friends’ social media posts.

In order to extend the ecosystem of Ambient Mode, Samsung will roll out a Software Development Kit (SDK) in beta version later this year.