On a rainy night, a family gathers in their living room to watch a scary movie. Snuggling up together under a big blanket, they push the sofa closer to the TV to maximize the spooky vibes. What else could they do to take their immersion to the next level?

Samsung Electronics exquisitely refined its Neo QLED 8K lineup’s sound system to allow users to take full advantage of their large TV’s audio quality. The flagship displays were designed to analyze both the size of the space where they sit and how they’ve been installed in order to calibrate sound to its optimal settings. The TVs use that information to pump out realistic, object-tracking sound through their eight total speakers. When applied to our ‘family movie night’ scenario above, the TV’s speakers would compensate for when the family’s thick blanket absorbed the tones of mid-to-high registers, and evenly distribute three-dimensional sound from the corners of the room to the centre when the family sat closer to the screen.

To learn more about how Samsung’s newest TVs customize sound based on where users place their screen, and how sound has evolved as tool for fostering immersive home entertainment, Samsung sat down with some of the developers behind the displays. 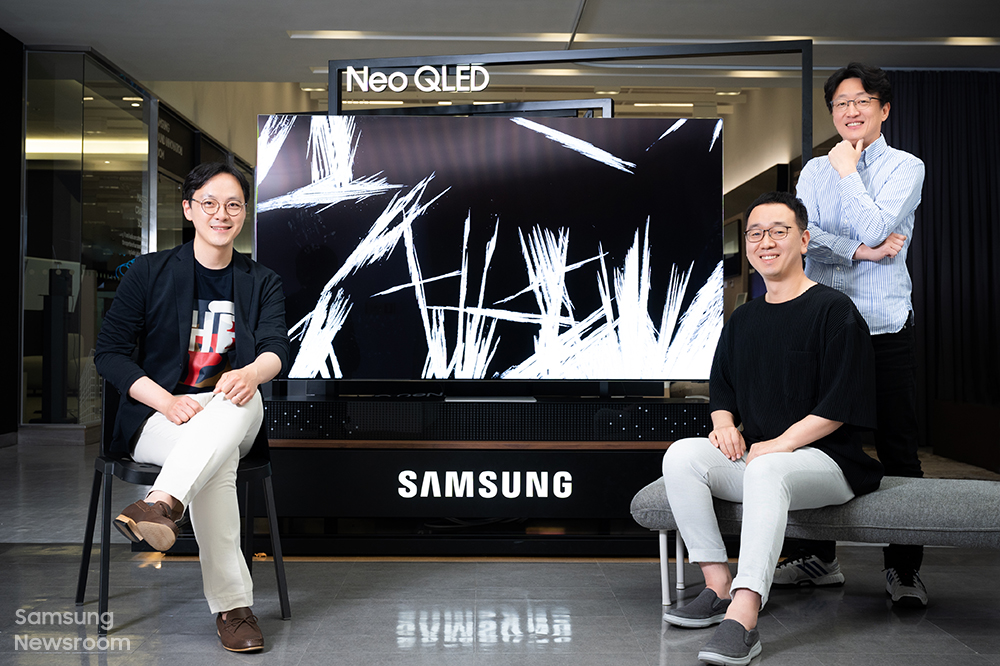 Today, with more users watching TV in more places, including living rooms, workrooms, bedrooms, terraces and more, both sitting up and lying down, and at different times of the day, our viewing habits are changing. Now, more users are customizing their viewing experience based on their specific living environment. With this in mind, the developers focused on creating technology that would automatically analyze users’ viewing environment to ensure that they’re always enjoying the best possible sound. The result is SpaceFit Sound, a feature that automatically checks for changes in your living space once a day and calibrates sound settings accordingly.

Here’s how it works: First, a built-in microphone identifies elements that can affect sound, such as curtains, carpets and walls. Suppose the TV is placed in a user’s living room, which features a carpet that we can assume absorbs mid-to-high range sound. In this case, SpaceFit Sound would optimize sound settings automatically to raise the mid-to-high range sound accordingly. It works the same regardless of whether stands, wall hangings and other elements are changed. If the TV were to be moved closer to the wall, then the space behind it would become narrower, which could affect low frequency sounds. SpaceFit Sound allows the TV to identify this change and adjust its settings in advance to produce clearer sound. 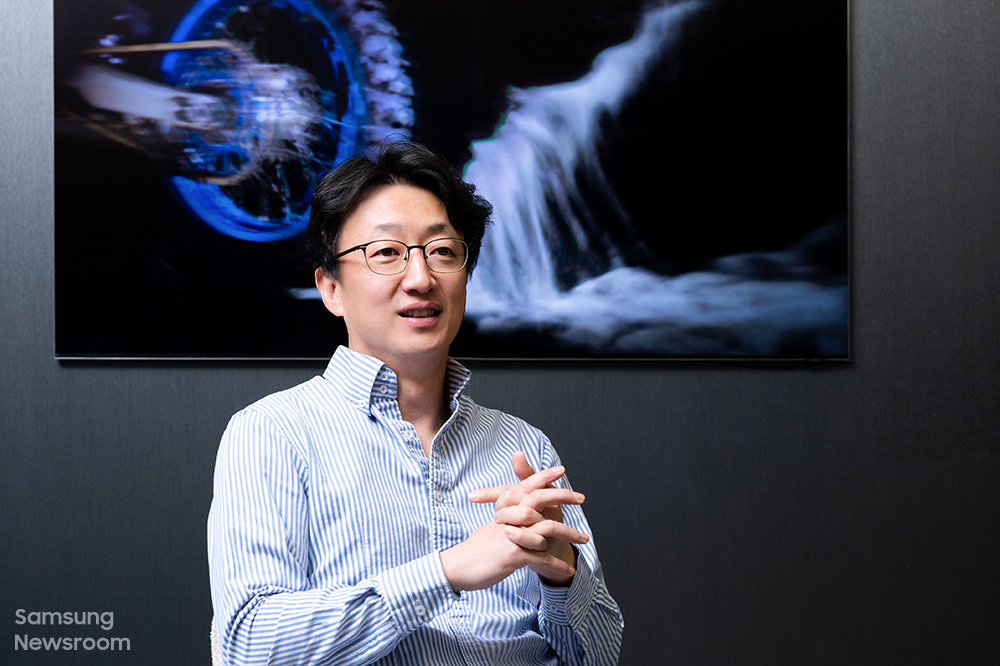 The key point to remember is that all of these processes occur automatically. As Engineer Sunmin Kim explained, “SpaceFit is an automated function that does not require that users press a button, and the device won’t send out a ‘testing’ sound. By simply turning it on or off, the TV will analyze the environment based on the sound of the content that the user actually consumes. So all you need to do is just enjoying what is being played on screen.”

This technology was made possible thanks to innovations that were based on a myriad of data and AI technologies. From sound-absorbing areas, such as what are referred to in sound engineering as ‘dead rooms,’ to acoustically reflective spaces, the team considered both extremes in terms of viewing environments.

“Since there were so many variables to consider, we built up a sufficiently wide learning database and analyzed it using machine learning technology. That’s where the AI technologies that Samsung developed kicked in,” said Sunmin Kim, who also noted that the feature “can cover almost any typical space in which a TV may be placed.”

Content is beginning to make use of a wider range of sound channels, and users’ preferred ways of enjoying that content are also changing. As home entertainment expands and both wide screens and multi-channel sources with immersive formats like films become more popular, it’s becoming commonplace for multiple people to enjoy the same content together. The key here is to widen the ‘sweet spot’ – the location from which users can enjoy optimal sound, even when located at the outside edges of the screen. As content grows more varied and screens become bigger, sound, too, must evolve in a way that enhances users’ enjoyment.

Object Tracking Sound (OTS) technology, a feature that tracks the movement of objects onscreen using the TV’s multi-channel speakers, is allowing Samsung to take users’ enjoyment to the next level. Neo QLED 8K includes an enhanced version of the technology, OTS Pro, and adds two centre speakers to previous models’ six-speaker setup, for a total of eight speakers. When an object onscreen moves, the speaker located in the optimal spot for expressing the movement produces sound, matching what the viewer sees on their screen. The immersive sound setup enriches the left and right stereo experience and the 3D effect, taking the viewing experience to new heights by making the user feel as if they were standing in the middle of the action. 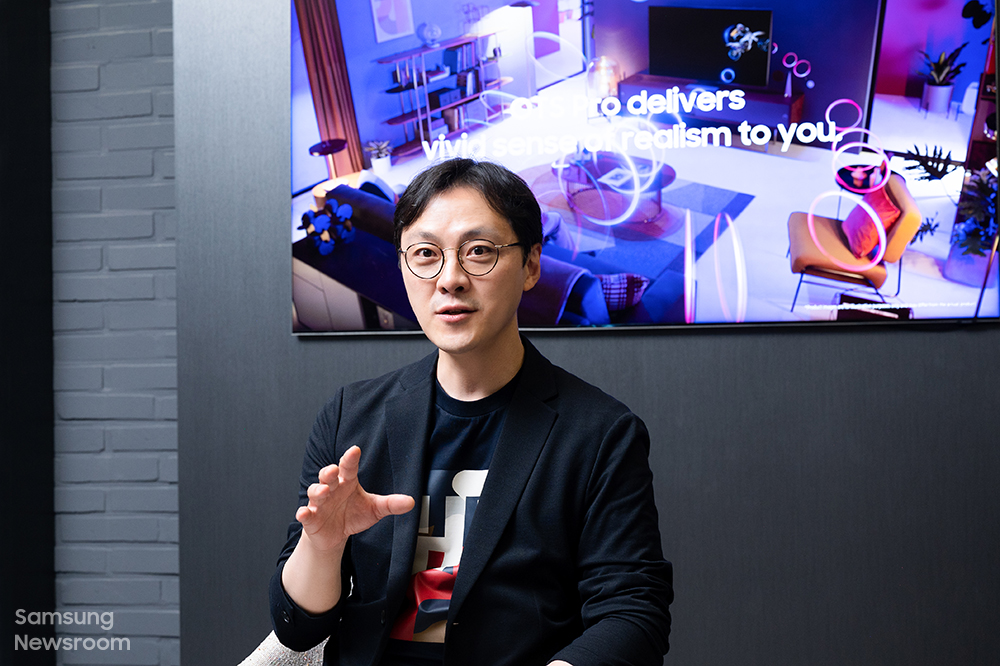 “Often, when consuming content on a large screen, viewers watching the TV from both sides notice that sound produced at the centre of the screen seems like it’s being produced in only one side,” said Engineer Jongbae Kim. “That’s why we added a centre speaker between the left and right sides. The combination of the newly added centre speaker and OTS Pro gathers sound in the middle of the screen, makes voices clearer, and expresses sound’s position more accurately, without distortion.”

If a speaker were to actually be placed at the centre of a TV, it could clash with the overall design concept. The developers solved this issue by attaching a tweeter applied with a wave guide to the rear of the device. “If a speaker were to be placed on the back, sound would disperse in all directions and bounce off the walls, reducing clarity,” said Engineer Sungjoo Kim. “We needed a technology that drew sound toward viewers when they were in front of their TV. Employing a hole array technique enabled us to ensure that sound would travel well from a tweeter to the front of the display.”

The team’s efforts to balance sound also extend to Samsung’s next-generation MICRO LED display. Because the bottom of this large screen can almost reach the floor of users’ living rooms, if users connect their display to a multi-component home theater setup, there may not be space to place a centre speaker.

“The 110-inch MICRO LED lineup features a μ-Symphony function, which allows you to use the built-in speaker as the centre speaker,” said Jongbae Kim. “This means that you do not have to use a separate centre speaker for your home entertainment system because MICRO LED’s multi-channel speaker fills that role. Because sound comes from the centre of the screen, there is no sound-image mismatching, and the user enjoys a cinema-like experience.”

The Infinity Screen, a unique aspect of Samsung’s TV design, maximizes immersion by making bezels nearly invisible. It also posed a unique challenge for the developers, requiring them to explore how to best mount multiple speakers within the device’s slim form. 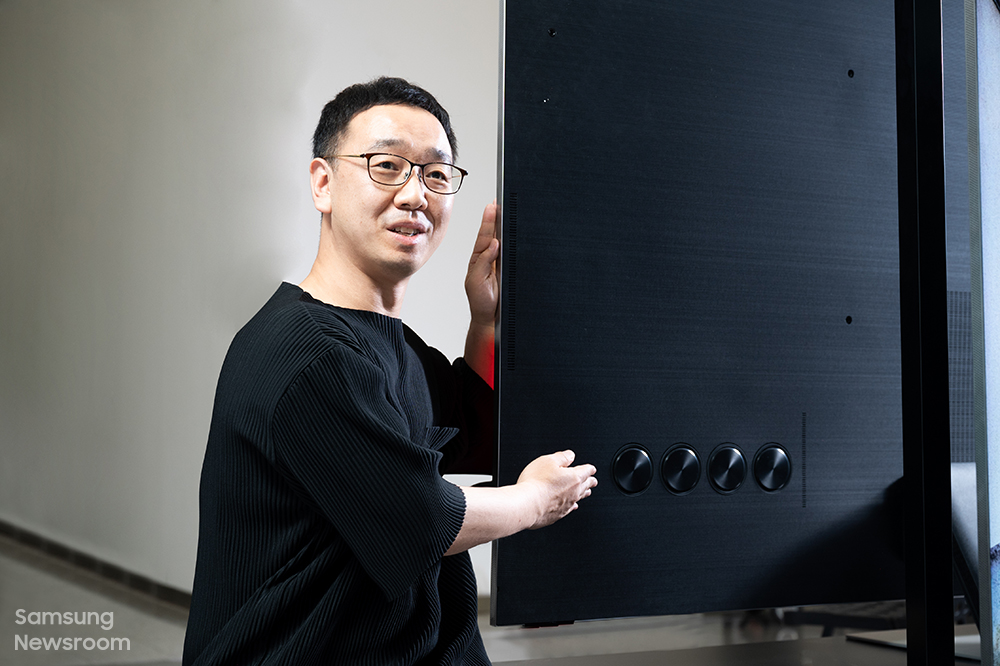 “In the past, a duct structure was used to draw the low frequency sound from the inside of the woofer speaker to the outside,” said Sungjoo Kim. “This type of design is capable of generating unwanted noise resulting from air turbulence. So, for the 8K models, we decided to take a ‘passive radiator’ approach that allowed us to produce rich, low-pitched sound. This not only enabled us to use the limited space inside the slim TV more efficiently, but it also allowed us to create rich and pure sound.”

“By exposing the diaphragm of the woofer and the passive radiator on the back of the TV,” he added, “it became possible to visualize NEO QLED’s sound performance in an interesting and intuitive way.”

It’s just one of Neo QLED TVs’ many innovative, out-of-the-box design elements. To help accommodate panels becoming thinner and thinner, components that used to serve basic functions have been given new roles. “We used part of the rear cover of the TV as an acoustic component that guides the direction of sound to the sides,” said Jongbae Kim. “We also reinvented the design of the ‘slit vent,’ a component inside the rear cover that extends from the centre tweeter to the bottom and was previously used to emit heat, to improve acoustic performance by controlling directivity. We utilized each and every part as much as possible, which means that no element of the design is without purpose.”

The developers have also gone to great lengths to gain a deeper understanding of the content users enjoy as part of an effort to provide better sound performance. For example, when analyzing sports content, they focus on reproducing the sound of the crowd, while for music, they try to create a stable sound stage. For movies, they conduct constant analysis to ensure that dialogue comes from the centre of the screen.

“With speaker form factors changing, upmixing is becoming more important,” said Sunmin Kim. “Input channels are becoming varied, and the average number of speakers is increasing to six to eight, which adds up to countless combinations of inputs and outputs.

“Let’s say you’re enjoying two-channel content. Here, instead of sending signals blindly through eight speakers, it is important to understand the mixing characteristics of the content and send each signal separately. Samsung’s unique technology makes this possible using an optimized algorithm that’s based on AI.”

Samsung TVs have led the global market for 15 years running[1], and the user data that the company has accumulated thus far has been an invaluable asset. As countless families across the world use Samsung TVs, the ubiquity of the company’s displays offers an opportunity to think about what’s next. Sungjoo Kim hinted at what Samsung has in store. “We are systematically building a deep learning network that is based on numerous data,” said Kim. “In addition, we are going to firmly establish our position as a global leader by discussing technologies needed in the mid-to-long term with Samsung Electronics’ overseas AI research centres.”

In response to an ever-growing flood of content, the developers are committed to helping Samsung TVs deliver a sound experience that’s as close to reality as possible.

Screens are getting bigger, designs are getting slimmer and content is becoming more varied. Keeping pace with trends, increasing speaker channels and doing so in three dimensions, and advancing our AI technologies to allow channels to better correspond to one another will bring us closer to delivering realistic sound. This may ultimately lead us into an era where you do not need a remote control to adjust sound settings.

[1] Source – Omdia, TV Sets Intelligence Service, Jan-2021. Ranking in terms of unit shipments for 15 years consecutive years ending 2020. Results are not an endorsement of Samsung. Any reliance on these results is at the third-party’s own risk.