In a “battle royale” style of game, such as PlayerUnknown’s Battle Ground (PUBG), the stakes are high. Individual players compete against each other to become the last player remaining. When one false move can result in a gamer crashing out of play, split-second reaction times are crucial. 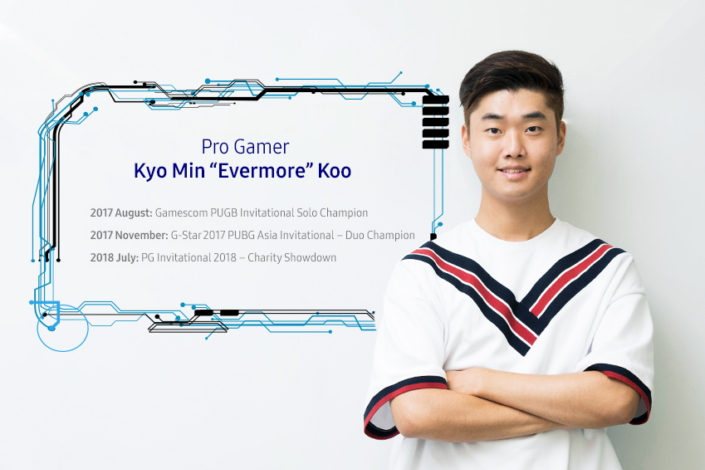 Professional sports players are sensitive to even the slightest changes in their equipment. For gamers, establishing the most suitable environment for gameplay can be just as important as improving their skills. One of the most significant pieces of computer equipment is the Solid-state Drive, a key component that improves a computer’s performance and the smoothness of play.

One individual who appreciates the importance of hardware performance is Kyo Min “Evermore” Koo, a rising star in professional gaming and avid streamer. He was also amongst the winners in the recent Charity tournament at the PUBG Invitational 2018 in Berlin. To get a better understanding of the interplay between the game, the equipment and the gamer, the Newsroom invited Evermore to perform a brief experiment on Samsung’s fastest SSD to date, the NVMe SSD 970 EVO.

An SSD is a type of data storage device, similar to a Hard Disk Drive (HDD). Currently the worldwide market share of HDD and SSD is 45% and 55%, respectively, but there are some key differences between the two devices. While an HDD stores and retrieves digital information using rotating disks coated with magnetic material, an SSD uses semiconductor flash memory to store data. This means an SSD is able to withstand greater amounts of shock and heat. The Samsung NVMe SSD 970 EVO boasts the fastest speed and highest reliability amongst SSDs, providing consumers the best conditions to perform HD and 3D graphic design tasks, play high spec games and create VR content.

Evermore tested out two desktop computers that had exactly the same systems – apart from their data storage drives. One was fitted with an HDD (1TB, SATA3, 7200rpm) and the other with an SSD (NVMe SSD 970 EVO, 250GB). 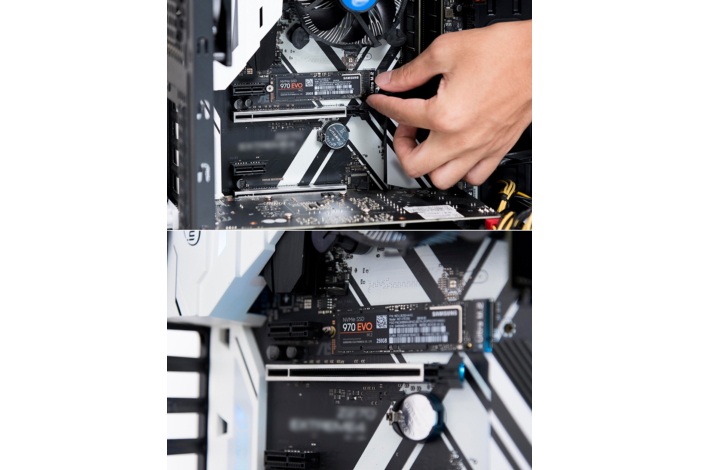 Installing an NVMe SSD 970 is quite simple. Insert the SSD in the M.2 slot. No additional cable is required. Remember to check in advance whether the M.2 slot of the mainboard supports the NVMe interface.

Recalling his past experiences, Evermore pointed to the tangible differences between the two types of data storage device: “My personal computer is equipped with the best of the best. One day I stopped by an Internet café that had computers with HDDs installed. I could really feel the difference. Just as I suspected, I was slower to start than my friends who were playing on different computers. There were also some delays during the battle. I had never lost to my friends before that day.”

The nature of open world games means that time is of the essence. “Everything happens in the blink of a moment when playing open world games,” Evermore explained. “The loading time of the textures on the map is crucial when playing games such as PUBG. Even when you spot your enemy before they spot you, if you react slowly because of the loading time, they will attack first and it can be hard to win.” 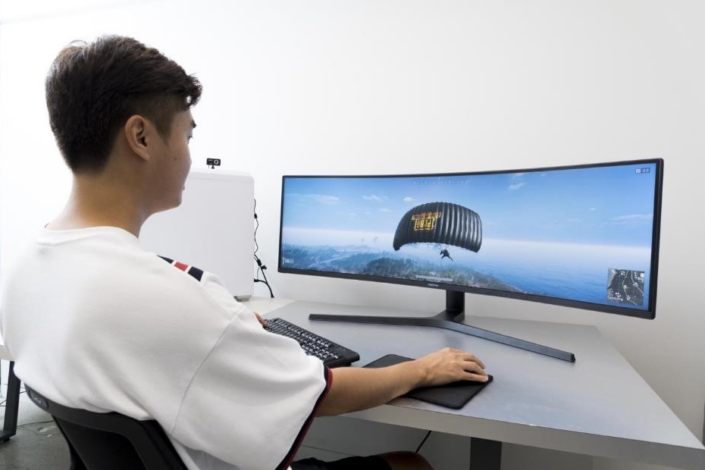 During battle royale games, multiple players all interact with each other across a vast battlefield, which means that a large amount of data is processed very quickly. A highly advanced SSD can significantly affect the match result.

During the experiment, Evermore could feel this immediately: “When playing the game, the computer reads and writes the data from the storage drive repeatedly, so it is important for the storage to have a high performance. While playing today on the computer installed with an HDD, I felt the same delay I experienced at the Internet café, whereas the computer with the NVMe SSD 970 EVO showed no such issues.”

Measuring the data processing speed for each computer. The speed of the computer equipped with an SSD 970 EVO (right) is more than twenty times faster than that of the computer with an HDD (left).

When playing a game which requires high specs, the computer’s fan can be very loud as it rotates to cool down the heat that the computer components are generating inside the case.

The power consumption can also soar when playing games for a long period of time, as Evermore revealed: “I spend any spare time I have playing games. However, the computer heats up when I use it for several hours.”

An SSD consumes less power than an HDD since the booting, loading and data processing speeds are swifter and it emits less heat. 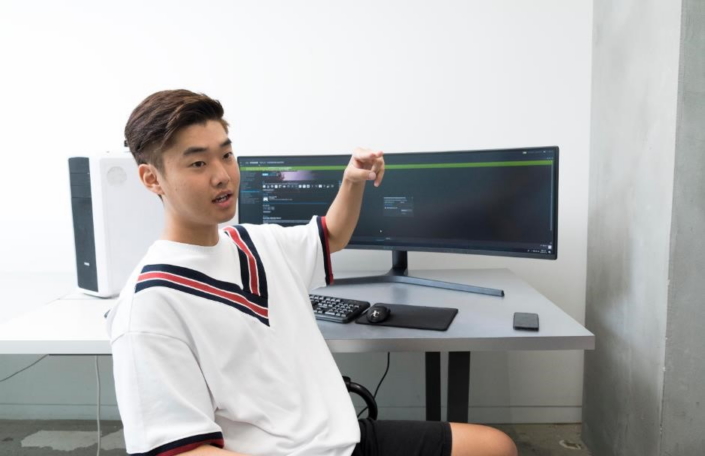 To Evermore, the contrast is significant: “I can definitely tell the difference between an HDD and SSD. Since large data processing is essential when playing open world games, they automatically consume more power. Of course, the CPU or storage drives heat up once you’ve been playing a high spec game for some time. The SSD 970 EVO, in that sense, is fascinating because it has a high level of performance but doesn’t heat up that much. I heard this is because of its high power efficiency.”

The NVMe SSD 970 EVO also has a Dynamic Thermal Guard function that safeguards against overheating by automatically monitoring and maintaining optimal operating temperatures. With high power efficiency optimized for high spec computing systems, gameplay can continue for many hours.

The increasing popularity of game streaming platforms has led more and more professional gamers to create their own streaming channels, and Evermore is no exception.

Evermore enjoys interacting with his fans on various streaming channels, including Twitch and Kakao TV

“Streaming is the easiest way to communicate with my fans,” he remarked. “In order to record and talk to my fans at the same time, I definitely need a high spec computer.”

Streamers will edit and upload highlight films, or live stream while playing games and communicating with their fans. Since everything is happening simultaneously, this process requires strong multitasking skills from both the gamer and the computer. The Samsung NVMe SSD 970 EVO minimizes buffering and other issues when multitasking, so that gamers can record their games and voice-chat with other players at the same time. 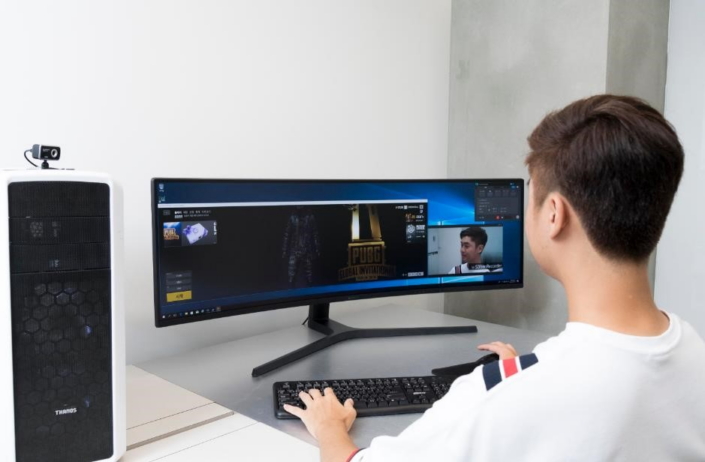 Evermore outlines the potential pitfalls and solutions: “During live streaming, there can be buffering when you run several programs at the same time. Sometimes, your voice does not sync with the video if you don’t have an adequate computer system. Using an advanced SSD like the 970 EVO eases the burden on the CPU and the graphics.”

With lightning fast speeds, superior power efficiency and the ability to perform multiple tasks simultaneously, the SSD 970 EVO is a data storage drive ideal for a wide range of high spec games and tasks.