[Interview] How Samsung Brought the Blank TV Screen to Life

“Is there any way to utilize the TV when it is not in use?”

Researchers, who had previously focused only on how to improve functions of the TV when it is on, began to think outside the box. The black screen of the TV when turned off is an eyesore to many. Some users even hide their TV sets in a cabinet. These observations prompted TV developers to act.

Concentrating their attention on the TV screen, they eventually came up with the inspired idea of making the screen “transparent” when not in use. Users can choose to use this transparent screen to display pictures, news or weather forecasts, or make it seamlessly blend with the background. Creators from Samsung Electronics’ Visual Display Division explain how they developed “Ambient Mode” below. 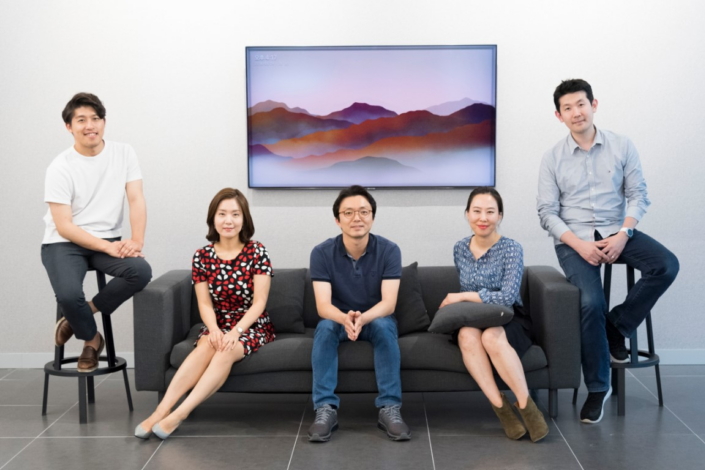 The TV is Gone! The TV Screen Blends in with the Background

At the First Look 2018 New York, held on March 7 (local time) at the American Stock Exchange, the SmartThings app was used to take a picture of the wall in front of which a QLED TV was positioned, and then the TV disappeared. It was now in Ambient Mode, one of the features of 2018 QLED TVs. When this simple but innovative feature was revealed for the first time in the world, the audience burst into applause.

Ambient Mode analyzes the pattern and texture of the wall where the TV is mounted and displays the result on screen, leaving only the TV frame visible. Contrast and brightness can be adjusted for the best result.

Ambient Mode can also display news and weather forecasts in real time. It is a far cry from a simple screensaver, which uses images to cover the blackness of the screen. “Bringing the data in real time, Ambient Mode puts truly ‘live’ content on the screen. This is what differentiates Ambient Mode,” said Suwon Shin from the R&D team. 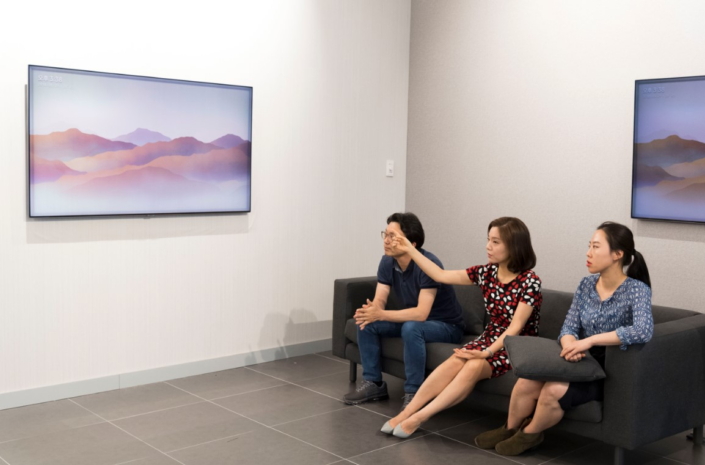 This innovative change was born through observing customers continuously. “My team researched lots of customers’ behaviors. Many users did not want to see the black screen in their living rooms when the TV was off. That’s when we came up with this idea.” said Yoojin Choi, a UX designer at Samsung Electronics. The division developed an algorism that generates patterns after analyzing the background.

This is not the only thing they learned through consumer research. According to Samsung Electronics’ survey, about 70 to 80 percent of households had bright wall colors without complicated patterns. They therefore added various plain background options so that customers could just choose one of them, fine-tune the color and brightness, and enjoy Ambient Mode. 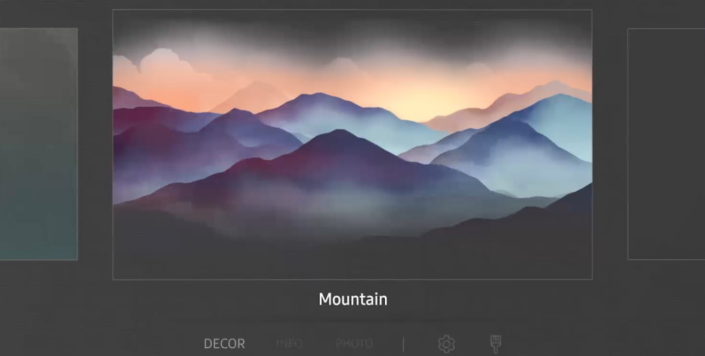 Ambient Mode combines varied content on the transparent screen. In order to make the home more comfortable, developers built around the concept of nature. At six o’clock in the morning when the sun rises and lightens the house, the white luminance display level increases. When indirect lighting, such as a fluorescent lamp, is turned on, yellow has the highest luminance value. Birds sing at noon and crickets chirp in the evening. It is perfection down to the smallest detail.

Hana Kim from the Product Strategy Team said, “Ambient Mode, which has become part of the house, will show you useful information in the busy morning or in the evening when you are home from work. It doesn’t require any user interference. Ambient Mode does it on its own.” 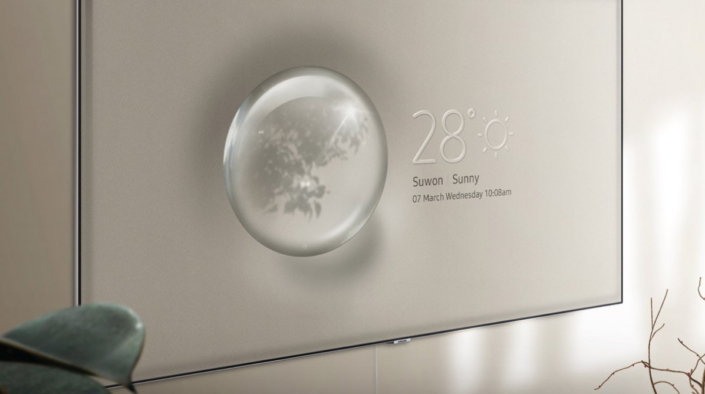 The process of creating an unprecedented experience, including content moving as if it were alive, was a series of twists and turns. In addition to developing technology that could read and respond sensitively to every situation, the engineers had to figure out what customers have in common. “A still picture would not work. We had to make it seem alive and in harmony with its surroundings. Over the past year, I made more than 900 sketches. Only 10 of them survived. It was such a difficult a mission,” said Choi. 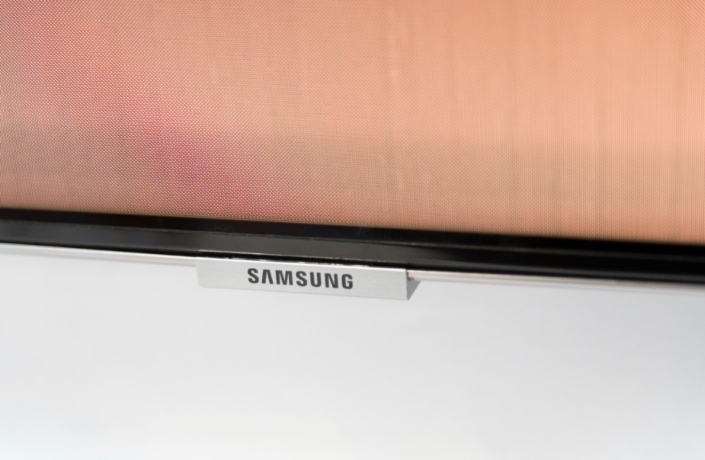 There were many technical hurdles. Soohong Kim, a hardware developer at Samsung Electronics recalled the days struggling to satisfy both engineers and designers. “Sometimes function and design do not go hand in hand. The sensor had to be placed in front for fine readings of the TV’s surroundings, but it didn’t look very good. Eventually, I put the sensor in the “Samsung” logo at the bottom of the screen. It is not visible to the naked eye.”

How to reach a consensus among planners, developers and designers was another hurdle to overcome. Since they were going where no one had gone before, endless meetings and discussions between departments became routine. “We were all greedy because we were taking the first step in a new field,” said Donghun Shin, a UX designer at Samsung Electronics. “We spent a lot of time in development and also made a lot of changes. We combined all the creative things together. It was a bumpy road, but we ended the journey satisfied.” 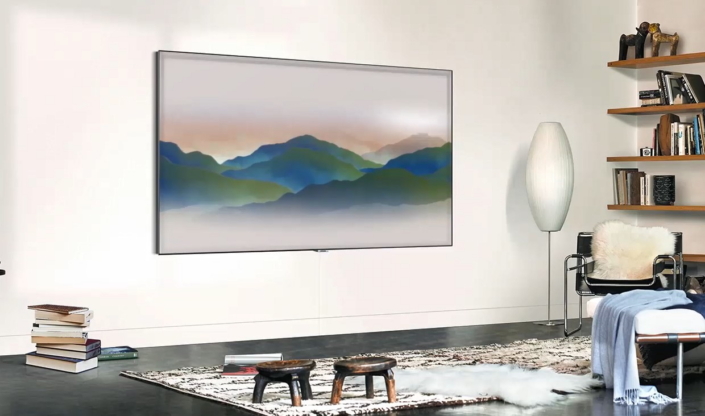 Conventional TVs consume electricity while not in use. However, in Ambient Mode, 2018 QLED TVs detect when users are not around or when the lights are off using Bluetooth Low Energy and turn themselves off. The key is connectivity between the TV and the user. This function reduces energy consumption and extends the life of the TVs. 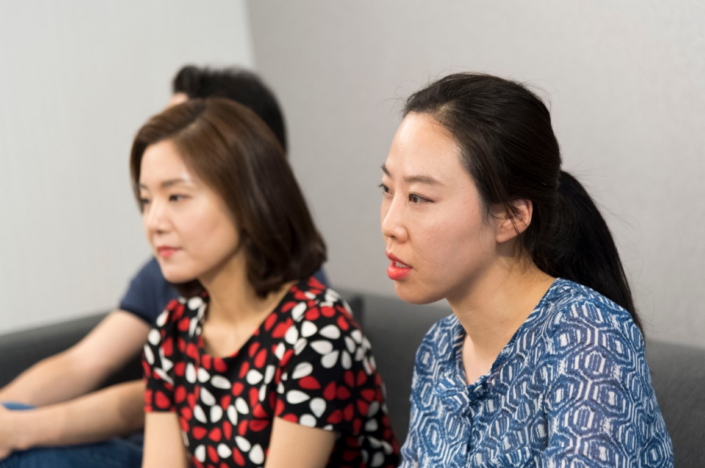 They look forward to seeing how Ambient Mode changes in the future. Hana Kim (pictured above) said, “There are various devices such as smartphones and tablets, but the TV has its own unique value in that it has a big screen for content sharing. Ambient Mode can encourage the media market to craft a range of content.”

“The Ambient Mode created an opportunity for the TV to be a warm and welcoming hub at the center of the living room,” said Yoojin Choi. “We will develop it so that families can communicate more and share a pleasant atmosphere in their living space.” 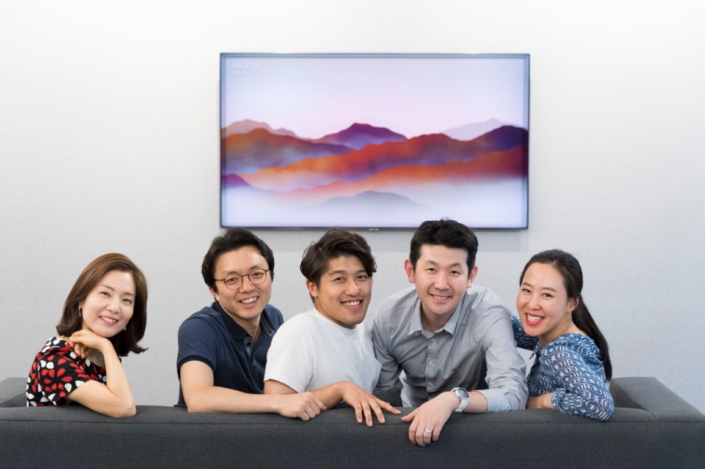 “Now the market is seeing the thinnest and largest TVs ever. We need new values to open a new market and I think Ambient Mode is the answer. 2018 QLED TVs with Ambient Mode bring the family together in the living room to have quality time. We don’t know where the end of the journey is, but one sure thing is that we will not stop here. We’re already wondering what the next innovation will be.”

With Ambient Mode, the creators realized what was only a wild imagination to someone else. And the team will continue their endeavor in bringing the unimaginable to reality.