The category-defining Galaxy Fold is designed to inspire and unlock new mobile experiences. It’s not just groundbreaking hardware that makes this device a game changer; it’s the seamless software as well. It’s the combination of an intuitive UI that emphasizes continuity, and a growing ecosystem of apps that leverage the Galaxy Fold’s dual displays to deliver the seamless foldable experience that consumers have been waiting for.

The Galaxy Fold’s spacious, 7.3-inch Infinity Flex Display is proof of the old adage that “bigger is better.”

As Jeong explained, one of the biggest realizations that the Galaxy Fold’s development team came to when testing the device was just how transformative a foldable device can have on the mobile experience.

“Before the development of the Galaxy Fold, I had a smartphone and a tablet, but the combination of the two created an entirely new experience,” said Jeong. “The larger screen completely changed things like watching movies, checking email and catching up on the news, to the point that I could no longer be satisfied with a smaller screen.”

Park also discussed the experience of using the Galaxy Fold, remarking that it is not only the presence of the big screen that makes the new device special, but the ways in which it has been optimized according to its shape and size.

“With the Galaxy Fold, it’s not just that the screen is bigger, but that the device has been optimized for two-handed use. One example is that the split keyboard feature allows the user to type comfortably when they are holding the wider device in two hands. What’s more, the camera button changes position fluidly when the phone is switched from portrait to landscape mode, and the home key can be aligned to either side of the screen so that the user doesn’t have to reposition their hand to reach it.”

With the Galaxy Fold’s official launch on September 6th in Korea, users can now experience firsthand what makes the device such a game changer.

Unfolding the Galaxy Fold’s Infinity Flex Display opens up a world of possibility in terms of multitasking. This is possible thanks to innovations like App Continuity and Multi-Active Window, which make it easy for users to take full advantage of the Galaxy Fold’s versatility.

According to Park, Samsung had been prioritizing enabling users to launch and utilize up to three apps simultaneously since the earliest stages of the Galaxy Fold’s development. Multi-Active Window makes this possible, allowing users to take their multitasking, entertainment and content consumption to the next level.

When gaming, for example, Multi-Active Window enables users to launch an app like YouTube and simultaneously watch walkthrough videos of the game while they’re playing. It also makes balancing multiple tasks, including messaging friends, browsing the web and viewing multimedia, a breeze.

The Galaxy Fold is a bold device with a bold vision for the future of the smartphone. It’s a vision that’s built on hardware and apps that power richer content consumption, superior multitasking, and that opens the door for users to enjoy new mobile experiences. 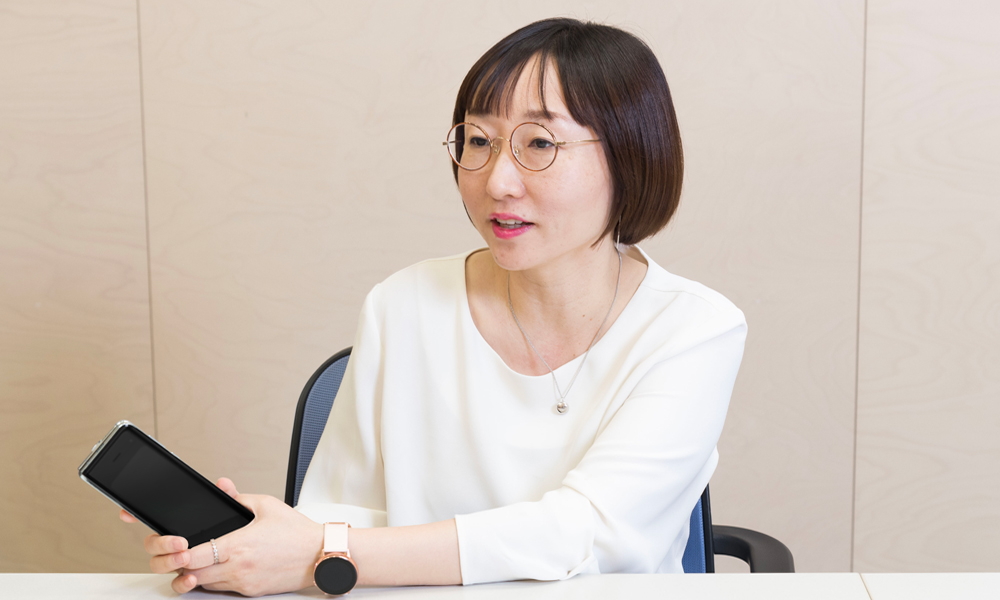 To help carry out that vision, Samsung’s developers have been working closely with Google and other major partners to enrich the Galaxy Fold’s ecosystem with popular apps and services available today. And their efforts have paid off. The development team has optimized hundreds of the most frequently used apps for the Galaxy Fold – including popular apps like YouTube, Facebook and Microsoft Office.

Both Jeong and Park described Samsung’s partnership with Google as key to establishing a smooth and efficient app-optimization process for the Galaxy Fold. “We formed a collaborative taskforce with Google at the very beginning of the development process,” said Jeong, “and we’ve been building this foldable ecosystem together ever since.”

They pointed to the Galaxy Fold’s App Continuity feature as a notable example of this collaboration. Realizing this feature, which enables apps to seamlessly transition between the cover and main displays when users open and close the device, required Samsung’s developers to completely rethink conventional app operations. The challenge was the fact that the Galaxy Fold not only has two screens, but that the aspect ratios of the screens are so drastically different. What’s more, developers needed to create a seamless transition where the user opens their device, and the app they were using on the front screen transitions in its optimized form to the larger screen without stopping or restarting. Fortunately, the development team were up to the task.

Another challenge that the team faced stemmed from Android’s traditional method of managing multiple apps. As Park explained, “With ‘standard’ Android, once two apps are activated, one of them is inevitably stopped.” To solve this issue, Jeong said, the team collaborated with Google to build an all-new multi-window system that was optimized for the Galaxy Fold’s larger screen.

With each component of the Galaxy Fold’s foldable UI in place, Samsung and Google started developing the framework necessary for developers to test and optimize their apps for this new device.

Test labs were set up in Korea, the U.S. and China to offer Android developers a chance to familiarize themselves with the device’s foldable UI and update their apps. To open the door for more developers to innovate within this foldable ecosystem, Samsung released a number of easily accessible online resources, including a ‘remote test lab,’ which was supported by Google, and allows developers to test-run apps on their PC using a virtual Galaxy Fold device, and an emulator.

Together, these resources offer developers the tools they need to optimize their apps for the interface of the future. And according to Park, plenty of developers have already jumped on board.

“Our partners and developers have shown tremendous interest in developing apps for the new form factor,” said Park. “We plan to expand our test labs soon to create more opportunities for developers to enrich the Galaxy Fold’s ecosystem with dynamic apps.”

The Future for Foldable

Several of the innovations created during the development process, including App Continuity and Multi-Active Window, have not only made the Galaxy Fold’s user experience more seamless and intuitive; they’ve also set a standard for foldable phones to follow.

As a result of Samsung’s close collaboration with Google, beginning with Android’s newest version, Android 10, both of the aforementioned innovations will be included as standard features for foldable phones. “When Android 10 rolls out and becomes the new standard for Android devices,” Jeong explained, “it will lead more developers to keep foldable-phone users in mind when developing apps.”

Ongoing partnerships with Google and major app developers will help Samsung enrich the Galaxy Fold’s app ecosystem with even more dynamic services – services that will only get better with the latest 5G network.

“The combination of the Galaxy Fold’s large display and 5G’s rapid speeds will revolutionize how we utilize everyday apps and enjoy a wide range of content,” said Park. “That also includes services like 4K streaming, which means that, for instance, users will be able to comfortably view multiple video streams at the same time on their Galaxy Fold’s spacious display.”

Jeong notes that the development process to optimize apps is happening quickly. She remarks that this “rapid optimization” is accelerating the company’s ability to bring a well-rounded foldable experience to users.

If an app has not yet been optimized for the Galaxy Fold, she continued, the smartphone’s built-in app-optimizing technology will help ensure that content is displayed in a way that makes full use of the device’s large display and foldable form. “With a tap of a button, the device automatically converts the app’s size and ratio to fit the display, so users don’t experience any discomfort.”

As Park noted, through app optimization, extensive testing, and by the forging of exciting partnerships, Samsung is “laying the foundation for a seamless and diverse foldable ecosystem – with the Galaxy Fold leading the industry forward.”

“Our ultimate goal is to inspire users with a new and innovative mobile experience,” added Jeong. “Going forward, we will continue to support the development of apps that leverage the foldable UX in incredible ways, and power all-new experiences within this growing ecosystem.” 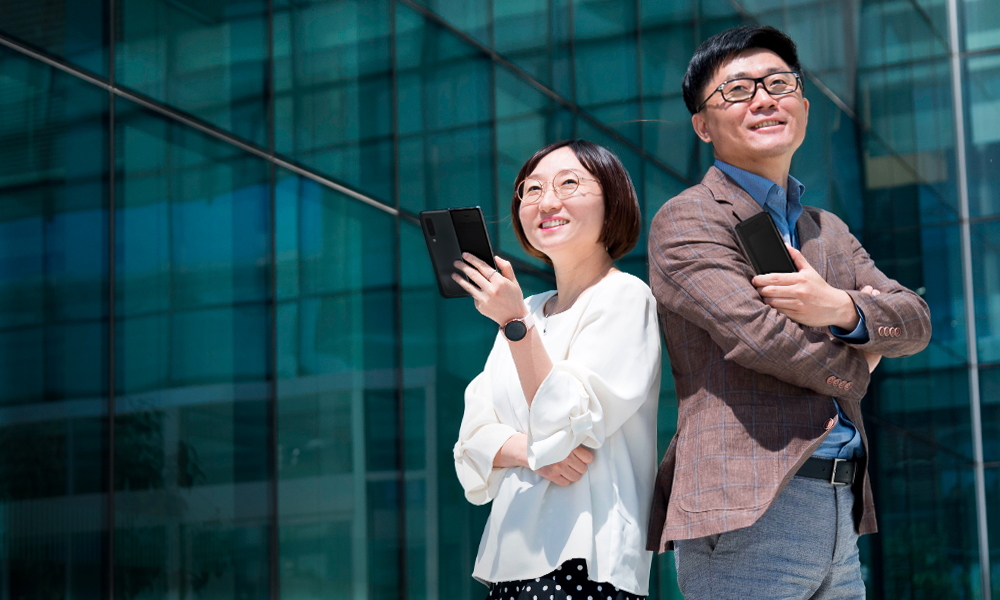