In 1996, only a select few of us were engaging with computers or accessing the Internet on a daily basis. As these trailblazers were mapping out the digital space as we know it today, Byungho Kim overcame adversity in the prime of his professional career and dedicated himself to making technology accessible to as many people as possible.

Continue to read the full story (694 words) below or jump to the summary (129 words) here. 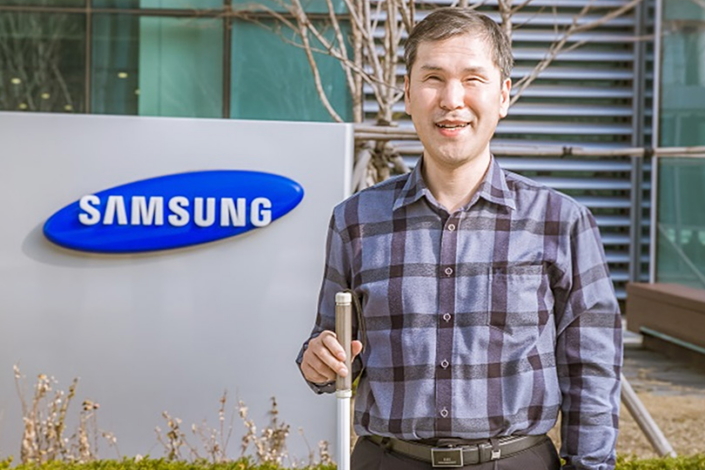 The husband and father of two was diagnosed legally blind in 1995, following several years of increasing vision loss. The next year, Kim underwent four months of full-time residential rehabilitation, where he acquired skills to navigate his condition. Afterwards, he came back to work and approached his managers with an idea: to open a computer technology learning center for the visually impaired.

In his time at the rehabilitation center, Kim was introduced to a screen reader. The software allows blind people or those with low vision to access a computer using their voice. This was a significant moment for Kim, who leapt at the opportunity to use it.

“It was so exciting to get my hands on a computer,” he recalled. “I had been without print media for 3 years; no newspapers, magazines or anything at all. But suddenly I was able to listen to the news I wanted and even read books. I was delighted.” 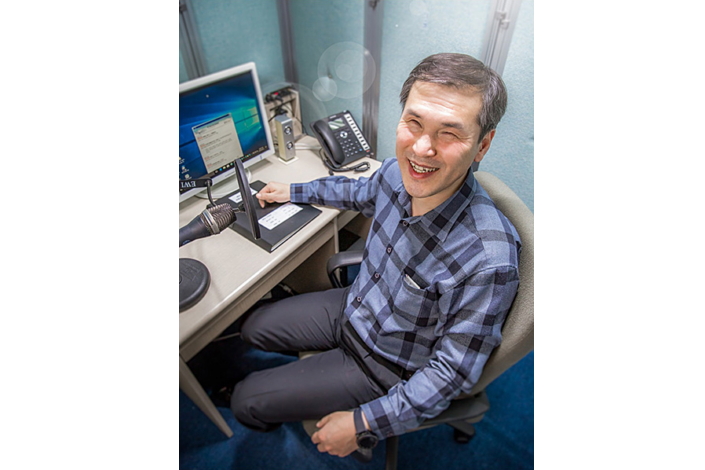 Byungho Kim at his desk in the Suwon Community Contribution Center, where he uses a screen reader to navigate his computer

Realizing the potential impact of this technology on digital accessibility, Kim was determined to teach others how to use it. “When I thought about how other people in my situation would appreciate a screen reader, I knew I had to act,” Kim remarked. He brought his idea to Samsung.

Kim played an instrumental role in the establishment of a computer technology program for the visually impaired, providing such students access to computer education. Sukyung Lee, who was involved in the project, distinctly remembers: “It was thanks to Kim’s proposal that we have been able to achieve all that we have in this area.”

In 2002, Samsung launched Anycom, an e-learning platform designed to provide online versions of the offline courses that were already available for the visually impaired. The online courses range from basic document processing to preparation for professional certifications. More than 100 students of Anycom have gained the necessary credentials to teach others and pass on the skills they have learned. 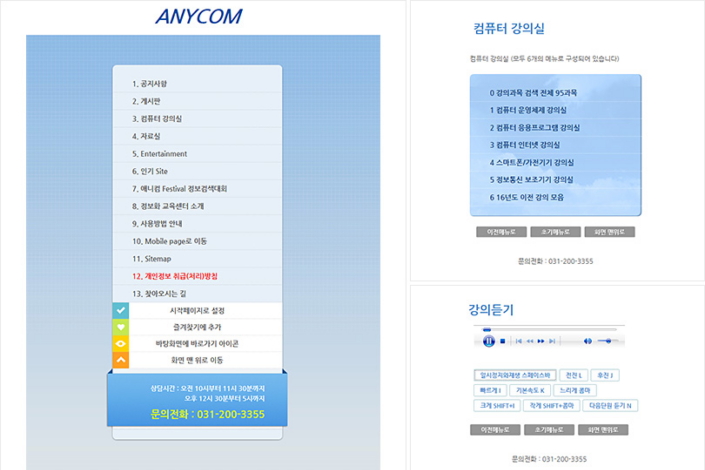 A variety of online courses are available at the Anycom website (anycom.samsunglove.co.kr)

As the course lecturer, Kim’s role has been integral throughout, updating older materials and recording new courses as the digital world develops. Thanks to his efforts, many people with vision loss have learnt how to use their computers and the Internet from the comfort of their own homes.

Kim’s work has also proved inspirational for his daughter, Jooyoung, who herself now works as a speech therapist in a center for the disabled. When she was a young girl, she even lent her voice for the greeting message which can still be heard today whenever someone opens the main page of the Anycom website. 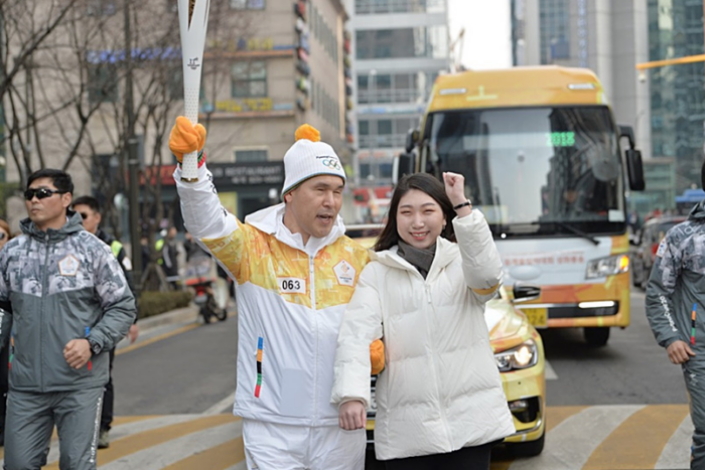 At home, Kim’s enthusiasm for technology has led him to take charge of many household chores. The laundry is now his sole responsibility, as he takes part in user tests for Samsung’s FlexWash™ washing machines, which are equipped with voice recognition. 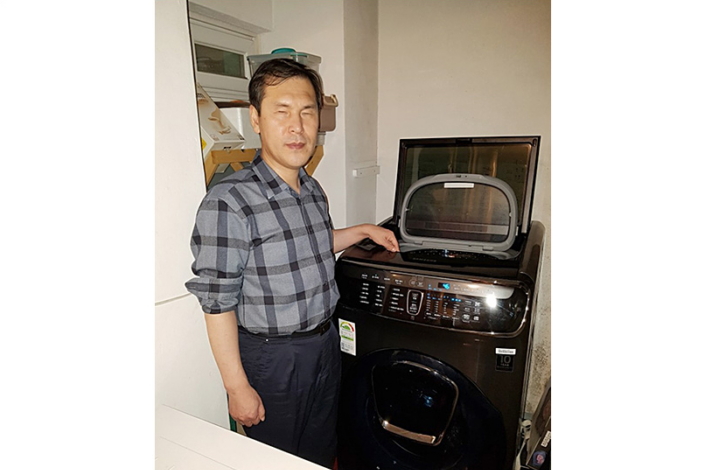 As a reviewer, Kim has taken special care to use each of the FlexWash™’s features for all its cycles: “I sent the developers an email listing every possible issue I encounter. I have suggested they change certain phrases or add a sound signal here and there. I think I’ve sent them almost 30 suggestions and they’ve made use of most of them. The washer has become easier to use and more accessible.”

Kim’s advice and attention to detail have become invaluable, not only for washers but also for many other Samsung products, such as the Galaxy Core Advance smartphone, which was launched in 2014. Using these products, Kim identifies issues that might otherwise have been overlooked.

Decades of Determination and Dedication

On April 20 2018, Kim attended a special ceremony in Seoul to celebrate the International Day of Persons with Disabilities. At the ceremony, he was presented with the ‘Disabled Person of the Year’ Presidential Award for his contributions to accessibility. 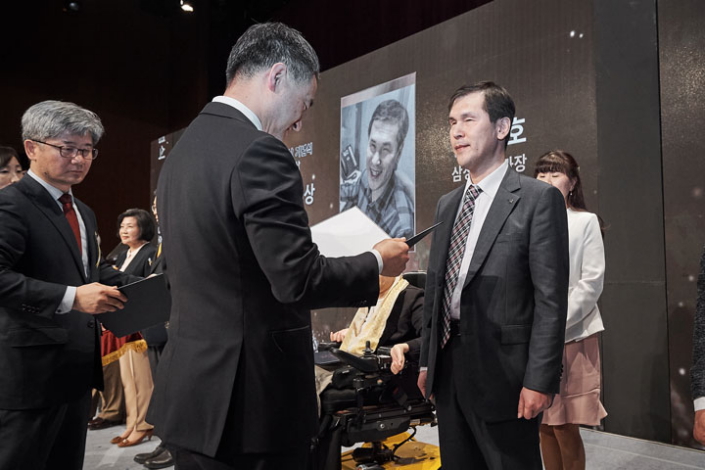 Kim’s continued passion to enhance access to technology was acknowledged by the Korean government, winning him a presidential award

Kim’s continuing commitment to making technology accessible shines through. “My life changed after becoming blind,” he reflected. “I began to think more about how I could help others like me. I thought about ways to develop lessons and volunteer programs and how to enable disabled people to use our products more easily. This drive has made me a better person.”