QLED 8K, Part 2: The Story Behind the ‘Perfect Reality’ of QLED 8K

Samsung Electronics has been behind many world firsts when it comes to TV technologies, including the world’s slimmest LED TV, the first FHD 3D TV, the largest UHD TV, and the first curved TV. At IFA 2018 in Berlin, the company unveiled another industry-first innovation with QLED 8K—the first 8K QLED TV.

To learn more about how the company’s latest groundbreaking TV mesmerizes viewers with virtually perfect picture quality and sound, Samsung Newsroom sat down with members of the team behind it, including product planners Beomkyun Rha and Jonghyuk Kim, and developers Hyunseung Lee and Sunghwan Jang. 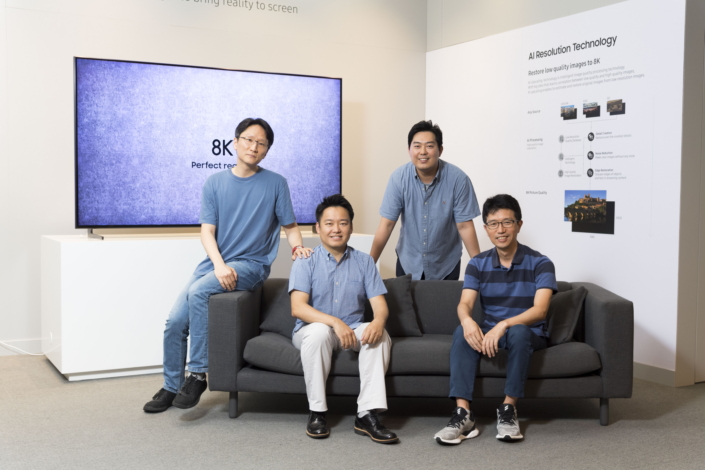 QLED 8K boasts a resolution of 7,680 x 4,320 pixels—16 times more than a full HD (FHD) TV, and four times higher than 4K UHD display. As developer Hyunseung Lee explained, the TV’s added resolution allows detailed in images to be expressed more clearly, and creates a sense of reality and depth that keeps you immersed in your content.

“With conventional SD (standard definition) or HD (high definition) displays, when people look closely at depicted images, they can recognize them as a cluster of pixels,” said Lee. “However, with QLED 8K, the level of resolution is so high that pixels become invisible to the human eye, and viewers become incapable of distinguishing depicted objects from the real thing.” 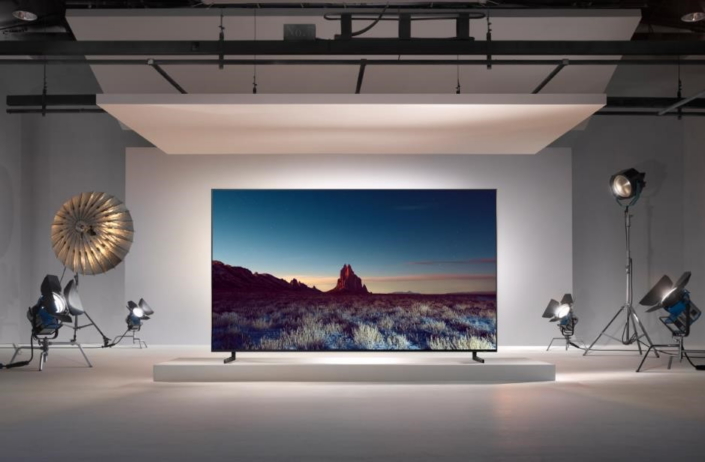 As fellow developer Sunghwan Jang noted, however, it’s not just QLED 8K’s sky-high resolution that enables it to provide such textured, realistic images. The TV’s exceptional peak brightness—up to 4,000 nits—allows it to illuminate small details with impeccable precision.

“Bright content is expressed differently in 8K resolution,” said Jang. “Because 8K features four times more pixels than 4K, images and videos that are brighter and include more detail can be presented more accurately in 8K.”

Taking Immersion to Another Level with AI

Samsung is the first manufacturer to implement artficial intelligence (AI) technology into a QLED TV.  Adding machine learning to the TV’s repertoire of immersion-enhancing features has made it easy for users to enjoy a wide range of content in crystal clear 8K.

Samsung’s exclusive machine-learning technology automatically upscales lower-resolution videos into 8K picture quality, regardless of the video’s native resolution or method of transmission. The technology is powered by the Quantum Processor 8K, which, according to product planner BeomKyun Rha, was enhanced to better process details and lighting. 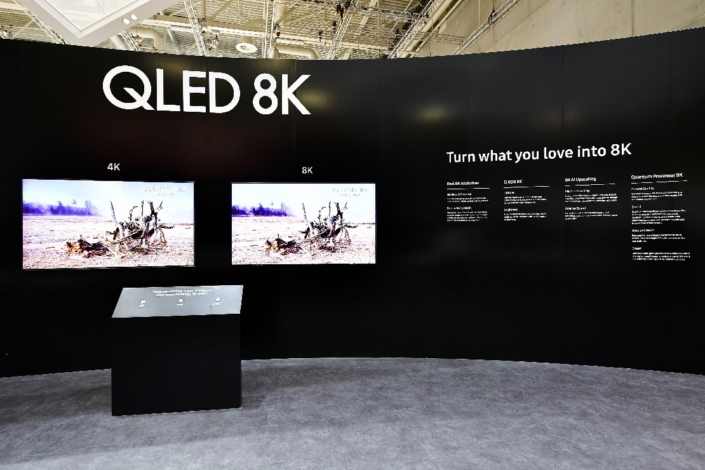 As Lee explained, the difference that the upscaling technology makes is often as clear as black and white. “When you look at 4K content next to upscaled 8K video, black areas of the screen are where you can see a major difference, even under bright conditions.”

The difference is also especially noticeable when viewing scenes with lots of detail and contrast. When viewing a nature documentary, for example, QLED 8K ensures sharp, natural colors that depict both the beaming yellow sun and the emerald waves beneath it with vivid accuracy.

When developing QLED 8K, Samsung’s R&D team was encouraged by the 8K market’s rapid development, but found it difficult to agree upon how to improve on QLED TV’s specifications, given the TV’s status as the cornerstone of the company’s display offerings. 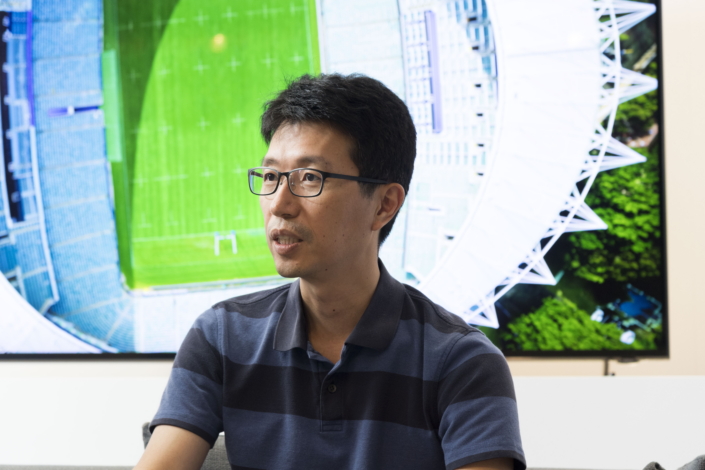 “The most difficult thing to do was to coordinate the opinions of all the related divisions,” explained Jang (pictured above). “For example, the goal was to achieve 4,000-nit brightness. Conventional 4K TVs feature an optimum brightness of 1,500 to 2,000-nits, so raising that figure to 4,000 presented a challenge.”

Because the market had never seen TVs that satisfied the 4,000-nit specification, the team set out to raise the bar by achieving that value. “We wanted to produce the world’s best TV,” said product planner Jonghyuk Kim. “A TV that would allow content to be depicted as faithfully to creators’ intention as possible. 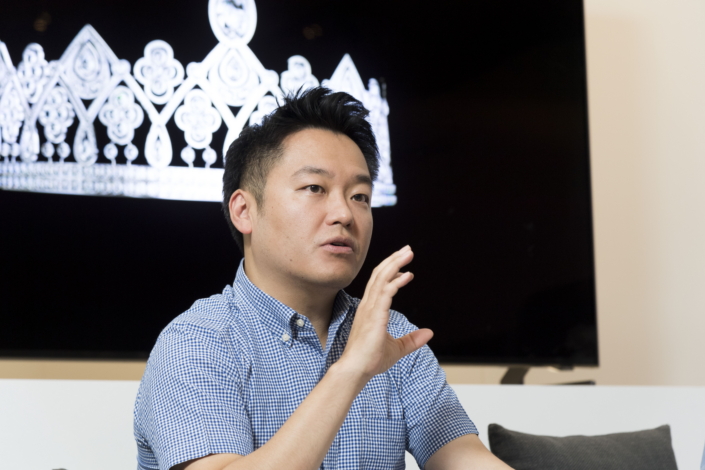 Delivering on that brightness goal presented a number of difficulties, and the team sought the opinions of a various divisions to help address them. “Once the discussions were done, [we] tirelessly researched every detail, such as how to adjust the amount of light to find an optimal balance of performance and durability,” Kim (pictured above) continued. “We worked very hard to figure out just the right amount. If it was too little, the light would be insufficient, but if it was too much, it would impact the product’s durability.”

Of course, Samsung’s R&D team overcame the challenges it faced during QLED 8K’s development, eventually delivering a TV with the power to redefine standards for visual immersion. The team isn’t resting on its laurels, however, as there’s still more work to be done.

Currently, Samsung’s 8K AI Upscaling technology is capable of enhancing content with better picture quality and sound, but the goal is to enable the AI to analyze users’ viewing conditions and environments in order to provide a more optimized, personalized experience. This will eventually allow the technology to offer any viewer an optimal and immersive viewing experience.

“We want our consumers to be able to immerse themselves in their favorite content, and view photos and videos from their everyday lives at a level of detail that allows them to feel like they’re present in the moment or scene,” said Rha. “We consider it our duty at Samsung to create new, innovative products like QLED 8K, that can help consumers realize such experiences.” 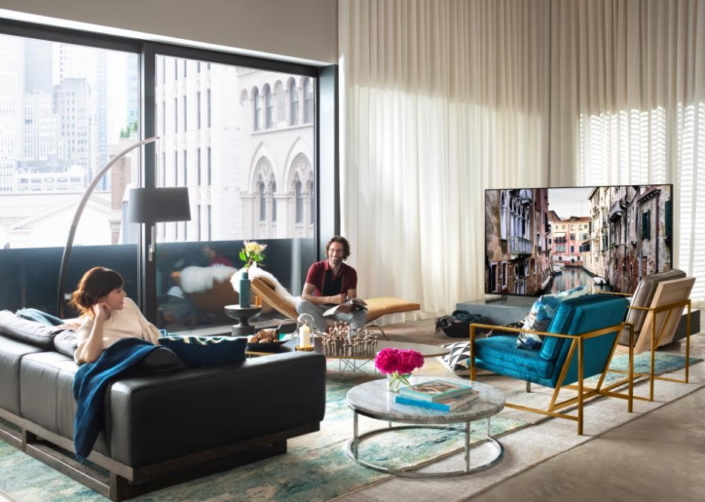