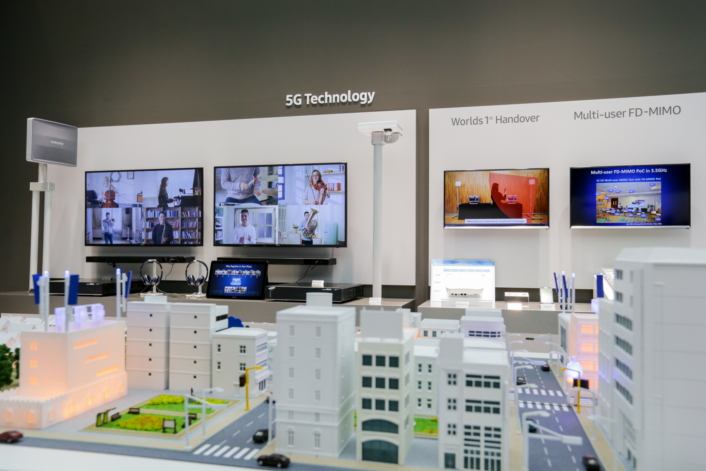 Samsung Electronics has showcased a series of key 5G innovations including advanced 5G technology platforms with mmWave, and Multi-Link solution at MWC 2016, making the strongest case yet for the viability and capability of next-generation mobile technologies.

“In 2014, Samsung has set some of the earliest industry benchmarks in 5G technology and this year we announced another benchmark focusing to real-world trials, mobility tests and 5G use cases like live streaming VR in near 4K UHD with tier 1 operators in the USA and Korea.” said Dongsoo Park, Executive Vice President and Head of Global Sales and Marketing team in Samsung’s Networks Business. “5G, the next generation of mobile and related network technology, is at our doorstep and it will enable a degree of connectivity that we could have only dreamed of just 10 years ago.”

“Entire industries are going to be transformed by the connectivity enabled by 5G networks and devices” said Kyungwhoon Cheun, Executive Vice President and Head of Communications Research team in Samsung’s Mobile Communications Business. “Looking at the evolving needs of everyone from individual subscribers to large enterprises, Samsung is heavily focused on identifying and delivering the technologies that will shape the next decade of connected users and services.”

Samsung’s 28GHz and 60GHz mmWave systems have demonstrated impressive results, both in the lab and in real-world environments. Samsung’s research into mmWave spectrum has found that it is ideally suited for next-generation, high-density small cell-type deployments. In addition, the dense antenna arrays, combined with signal processing technology, enable advanced hybrid beamforming techniques that improve cell capacity and user experience by ensuring the best possible radio signal, directly targeted to each user’s device. Making use of this adaptive array antenna technology, Samsung’s beamforming technology has the ability to compensate in non-line of sight (nLoS) situations by bouncing a beam off of nearby surfaces in order to reach the user’s device.

World Firsts – Mobility in your Hand

Most recently, Samsung has begun to expand its development efforts to surpass other key milestones, including a successful demonstration of multi-cell mobility, as well as a handheld device in a commercial form-factor – both world firsts.

The mobility tests represent an important requirement for commercialization, and Samsung has demonstrated the ability to seamlessly handover between cells with no interruption to the user experience. This includes both intra-system (mmWave cell to mmWave cell) and inter-system (mmWave cell to LTE) handovers. Meanwhile, the device prototype, based on Samsung’s Galaxy S6, maintains existing 3G and LTE connectivity with the addition of an embedded 60GHz antenna module.

A typical mobile network today can be a pretty complicated web of technologies. Most of these networks are composed of a range of different frequency bands, usage regulations (licensed and unlicensed) and technology standards (2G, 3G, LTE, WiFi).

With 5G networks, Samsung will take aggregation technology one giant leap forward with the introduction of its Smart Multi-Link solution. Leveraging the power of Network Function Virtualization (NFV) and Software-Defined Networks (SDN) into a Unified Core solution, Samsung will provide operators with the ability to aggregate connectivity across any number of access technologies (e.g. 3-band LTE + WiFi, 5G + LTE-U, etc.) in a manner that is seamless and transparent for end-users.

Using its broad range of expertise across product portfolios—from mobile devices to home appliances to semiconductor chips—Samsung is able to rapidly innovate and build truly end-to-end portfolios that meet the diverse needs of its customers from users to service providers, and from enterprise to government.

Samsung also seeks to contribute to increased connectivity and ubiquitous access to services through its significant participation in global standards organizations such as the 3GPP and the ITU. At the same time, partnerships with both governments (such as the Giga Korea Project and Europe’s 5G-PPP) and various leading research institutions mean that Samsung is at the forefront of the 5G standardization effort.