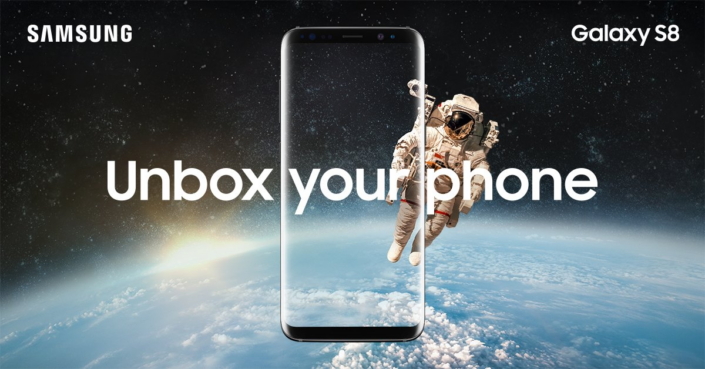 Samsung Electronics, along with marketing partners Leo Burnett and Turner Duckworth, this week began rolling out an integrated brand and product campaign following the unveiling of the Samsung Galaxy S8 in late March.

“Our brand work is the first articulation of this evolution to create a new connection with our consumers through a shared value-based approach, rooted firmly in our company’s philosophy ‘that meaningful progress can only happen when you dare to defy barriers,” said Pio Schunker, SVP Global Head Integrated Marketing, Mobile Communications Business at Samsung Electronics. “Samsung is a brand focused on creating real human value with its technology and we want to build upon our tech prowess to become a human-focused lifestyle brand.”

“The New Normal” and “Breaking Out” were released following the successful introduction of both “The Ostrich” and “This is a Phone” at Samsung’s Unpacked event which was held on March 29 in New York. In addition to these short films, Samsung is also rolling out a series of digital, social and out-of-home activations across the globe, such as “Whale” and “Astronaut.” The collection of work by Leo Burnett Worldwide and Turner Duckworth extends the philosophy of how Samsung’s products continue to defy conventional categories.

“Great brands have a purpose and a point of view about life. Samsung stops at nothing to create impossible technologies so that people can do impossible things,” said Mark Tutssel, global chief creative officer of Leo Burnett Worldwide. “The empowering message of #DoWhatYouCant, introduced during the 2016 Olympic Games, helped Samsung become one of the most visible brands during the Games. Now, this new campaign continues to push the boundaries of emotional storytelling to connect with people in a powerful fashion. It’s a brand living its purpose.”

Set to The Beatles’ hit, “Across the Universe,” “The New Normal” video by Leo Burnett Chicago opens with a hospital delivery room scene as a father hovers over his newborn with a Samsung device. The first photo is captured, and shared, essentially connecting the child to the rest of the world. The video continues to tell a story through the eyes of a generation who, thanks to Samsung innovation, are living the promise of #DoWhatYouCant. It explores the ways Samsung has defied technological barriers so what once was impossible is now the new normal – demonstrating how technology, at its best, helps consumers make meaningful connections and progress.

The “Breaking Out” video by Leo Burnett Chicago and Sydney, highlights the Samsung Galaxy S8’s revolutionary new “Infinity Display” which gives consumers more viewing freedom. The creative insight for the video is based on the concept of breaking free from the confines of a normal phone, smashing off its borders and its home button to unveil and unbox the Samsung Galaxy S8.

“Samsung’s approach to visual identity design is directly inspired by the idea of defying barriers. It is extremely disciplined, but highly flexible. This design, while driving consistency, is also a springboard for unlimited creativity. This was only possible with radical collaboration between Samsung, Leo Burnett and Turner Duckworth,” said David Turner, designer and founder of Turner Duckworth.

Download video files for “The New Normal,” “The Ostrich,” “Breaking Out,” “Whale” and “Astronaut” here.